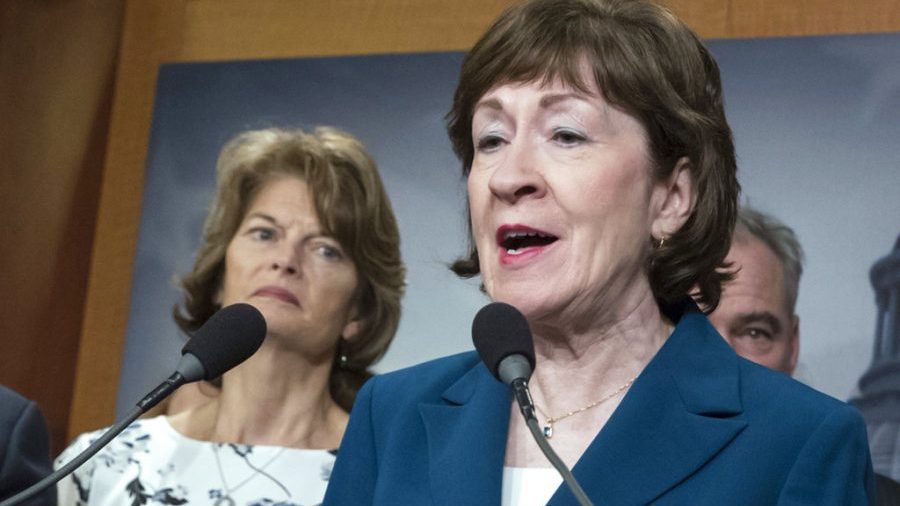 In this Feb. 15, 2018, file photo, Sen. Susan Collins, R-Maine and Sen. Lisa Murkowski, R-Alaska, left, are shown during a news conference at the Capitol in Washington. The Senate battle over Donald Trump's new Supreme Court nominee is off to a fiery start - even before the president makes his choice. Republican and Democratic leaders traded accusations and barbed comments Thursday on the new vacancy, abortion and the debate to come. (AP Photo/J. Scott Applewhite)

In light of Senator Lisa Murkowski’s (R-Alaska) refusal to support Brett Kavanaugh’s confirmation to the U.S. Supreme Court, The Stream decided to interview an Alaskan conservative leader. Joe Miller is a radio host and businessman, who defeated Murkowski in the 2010 Republican primary. She subsequently won election anyway in a write-in campaign.

Were you surprised by Lisa Murkowski’s decision to vote with the Democrats?

Sen. Murkowski’s vote against Brett Kavanaugh didn’t surprise me at all. The reason I decided to challenge her in 2010 is because she sided with Senate Democrats more than any Republican up for re-election.

On key issues — including the right to life and the need to repeal Obamacare — it was clear to me she did not stand with the GOP party platform. Her Senate votes since then have borne that out. Now, she could not even offer her consent to a fairly mainstream jurist nominated by a GOP president. A man who garnered support from the vast majority of Republicans. I know Alaskans are very disappointed with and embarrassed by her decision.

What do you think of her stated reasons — Kavanaugh’s so-called “temperament”? Murkowski pointed to his anger evidenced when defending himself from ludicrous charges of being a serial gang rapist in high school.

That’s ridiculous. On the one hand, Murkowski stated that the judge “is a good man,” but on the other she strongly implied moral failings. But consistency is not one of her strong suits. Nor has she ever been known for her eloquence or logic. Joe Miller, GOP nominee for US Senate from Alaska, 2010

Remind us how Murkowski got into the Senate, please.

Her father, Frank Murkowski, appointed her to his seat once he was elected governor of Alaska. He once introduced her to voters with: “Pay tribute to Caesar!”

How out of step are her positions with those of the rest of the GOP? With Alaskans? On which issues is she most out of step?

Murkowski does not represent average Alaskans, although she does represent some very powerful interests in the state. Her big-spending, pro-abortion, and internationalist positions are not consistent with what most Alaskans expect from their senator. For more, check out some of these YouTube videos documenting this fact.

How is it that a state as apparently conservative as Alaska keeps re-electing her?

Fraud is a major issue in Alaska. We still use one of the Diebold electronic voting machines that has been banned in several lower 48 states. Ballots can easily be manipulated at the precinct level, as they were across the state in 2010. We proved an unprecedented level of fraud in that election, and had strong circumstantial evidence of it in 2016. Even with the fraud-laced voting system in Alaska, Murkowski has never been elected by a majority of the vote.

I know Alaskans are very disappointed and embarrassed.

Democratic leaders and donors are promising to punish their own candidates if they support Kavanaugh. Should the GOP do that to Murkowski, given how crucial this vote is?

Murkowski is owned by the Establishment. My guess is she had “permission” to cast her vote as she did. But even if she didn’t, Murkowski will never be significantly penalized for breaking the rules. For example, when she lost the GOP primary, then broke her word and ran against me in the 2010 general, the only GOP senator in 2010 who voted to strip her of leadership was Jim DeMint.

It’s four years before Murkowski needs to run for re-election. What are the chances of a conservative Republican emerging to challenge her in the primaries? Sarah Palin has Tweeted about it. Would that be plausible to you? Anyone else?

I do not believe any mainstream Republican will emerge to challenge Murkowski — except, perhaps, in an attempt to split the primary vote so as to assure her victory. Nor have I heard from any conservative, including my friend Sarah Palin, that he or she is planning on challenging Murkowski.

Are you considering running again?

I have been asked by numerous individuals to run again. Surprisingly, quite a few past Murkowski voters have contacted me, also asking me to run and offering their unequivocal support for 2022. (See some of their comments here.) However, with eight children, six grandkids (and another due this week!), as well as a busy law practice and other active businesses, a run is not an attractive proposition to me at this time. Given my past candidacies, I recognize the real cost to family and finances. But I also will not turn away if called to do it. Kathleen and I continue to pray about next steps and ask that your readers do the same.

After the Kavanaugh Riot, Now What? Sweeping Up the Mess