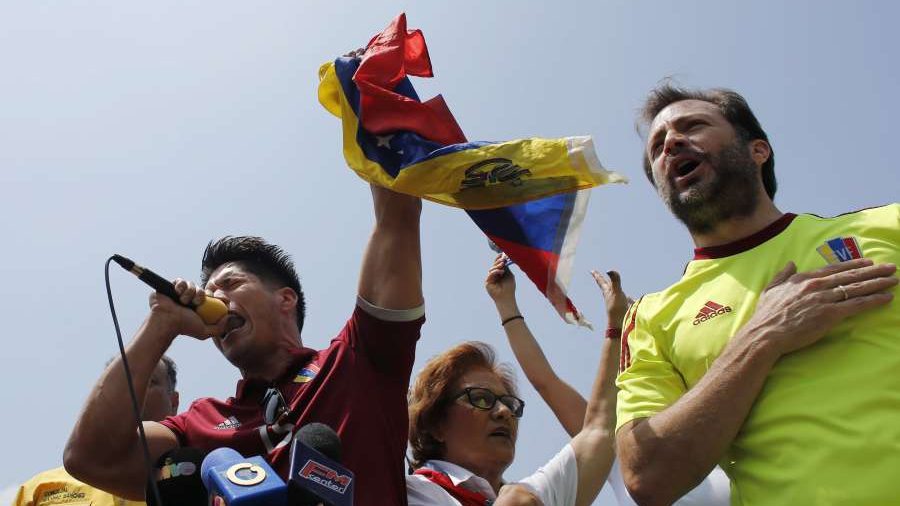 FILE - Venezuelan singer Jesus Alberto Miranda, known as Chino, left, and Chacao Mayor Ramon Muchacho, sing the national anthem during an anti-government protest in Caracas, Venezuela. Venezuela's supreme court ordered the removal and arrest of Muchacho, Tuesday, Aug. 8, 2017, for not following an order to remove barricades set up in the Chacao district of eastern Caracas.

Venezuela is handing over unprecedented control of its state-owned oil assets to longtime financial backer Russia in an effort to stave off insolvency and economic collapse.

Battered by civil unrest that threatens to become a total political meltdown, the socialist government of President Nicolas Maduro has offered an ownership stake in up to nine of Venezuela’s most productive oil projects, Reuters reported Friday.

The deals give Russian President Vladimir Putin an even stronger foothold in the Western Hemisphere’s largest oil reserves and, potentially, a way to skirt U.S. economic sanctions imposed as punishment for Moscow’s election meddling and military intervention in Ukraine.

Caracas has reportedly used the Russian cash to avoid defaulting on sovereign bond payments on two separate occasions. The Maduro regime desperately needs the currency infusions because it has $6 billion of debt payments coming due this year and is estimated to have only $10 billion in cash remaining, reports the Associated Press.

Though the two countries are longtime allies, some in the Maduro opposition now say Russia is exploiting Venezuela’s problems to gain permanent leverage over the country.

“Rosneft is definitely taking advantage of the situation,” Elias Matta, vice president of the energy commission at Venezuela’s elected National Assembly, told Reuters. “They know this is a weak government; that it’s desperate for cash — and they’re sharks.”

Rosneft now resells about 225,000 barrels per day of Venezuelan oil — 13 percent of the Venezuela’s total oil exports — according to PDVSA documents obtained by Reuters. Even though sanctions prevent Rosneft from doing business with U.S. firms, the Russian oil giant is able to sell much of that crude to American refiners through intermediaries such as oil traders.

Moscow and Caracas are also in talks for a separate oil deal that would allow Russia to evade potential complications from U.S. sanctions, Reuters reported in July. Rosneft currently has a 49.9 percent collateral stake in Venezuelan-owned, U.S.-based Citgo, which it took in exchange for loaning $1.5 billion to PDVSA last year. If the Venezuelan state oil company goes bankrupt, then the collateral stake would give Rosneft — and Moscow — significant control of a U.S.-based energy company.

Under the new deal, Rosneft would swap its collateral stake in Citgo for stakes in three additional PDVSA oil fields, two natural gas fields, and fuel supply contract. The arrangement would allow Russia to keep its Venezuelan oil holdings while avoiding a situation in which a U.S.-sanctioned company, Rosfnet, controls American oil refining infrastructure.

Despite the risks that come with making deals with a barely solvent government under U.S. sanction, Russia remains eager to get its hands on as much of Venezuela’s oil assets as it can. Even at today’s relatively low oil prices, Venezuelan oil shipments to Rosneft would be worth about $3.6 billion annually, reports Reuters.