Messages that paint abortion as good and even necessary for women's success are ultimately bound to fail. 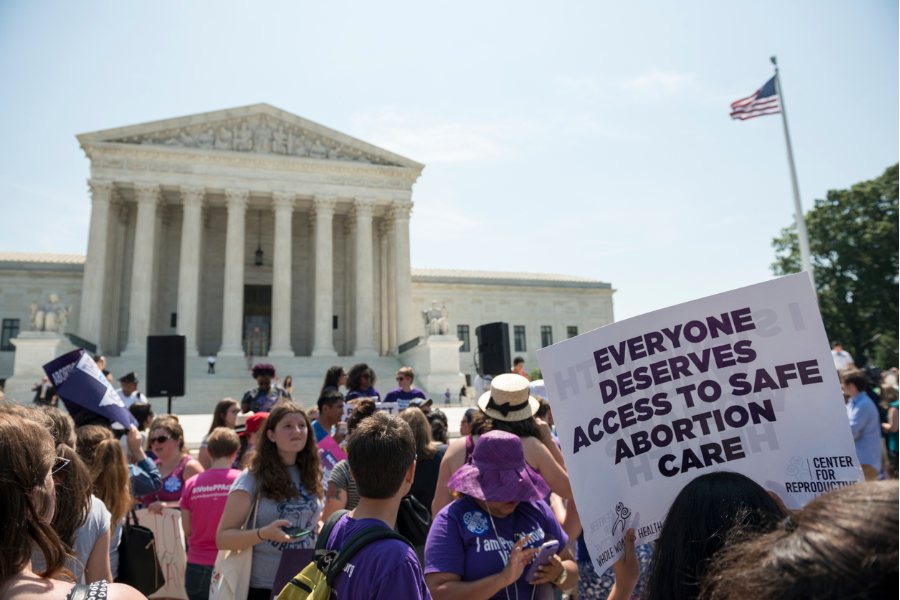 Pro-choice supporters stand in front of the U.S. Supreme Court after the court, in a 5-3 ruling in the case Whole Woman's Health v. Hellerstedt, struck down a Texas abortion access law.

As abortion numbers in the U.S. decline, the pro-choice obsession with de-stigmatizing abortion seems to be ramping up.

One example is a new set of billboards in Iowa encouraging women to “say abortion.”

With messages like “I had an abortion and it was just health care,” the billboards are meant to dismantle the “cycle of silence and stigma” concerning abortion in Iowa. Abortion advocates apparently want abortion to be as routine as a “crappy dentist appointment.”

But it never will be. Pretending abortion is the same as getting a tooth pulled is a lie that harms and disrespects women.

I spoke with pro-life activist and feminist Destiny Herndon-De la Rosa about why.

Not a “Social Stigma”

Destiny is the director of New Wave Feminists. “Abortion is violence,” she told me. “Any form of aggression that takes a human life cannot be health care.”

She also thinks the effort to de-stigmatize abortion is “ironic,” because messages like the ones on the Iowa billboards “trivialize the experience of so many women.” She referred to a similar billboard in Dallas touting the message, “abortion is self-care.”

“They weren’t getting a pedicure and a massage,” she said of women who have had abortions. She believes many women are propelled toward a “tough and difficult” decision thanks to “socio-economic pressures.”

Indeed, one study showed that 73 percent of post-abortive women surveyed had abortions because they couldn’t afford a baby.

That doesn’t make abortion right, of course. Destiny says the real stigma around abortion isn’t social, but biological. Abortion is “literally going against the nature of womanhood,” and what women are capable of doing — growing human life inside their bodies. She believes women who abort instinctively know they are preventing the growth of her own child “through a violent procedure.”

(No wonder there are entire organizations dedicated to helping women work through abortion regret. One of them will be featured at the upcoming March for Life on January 18.)

A Brand of Feminism That Says You Can’t

So what’s the solution? It’s clear what the pro-choice movement thinks: Don’t simply promote access to abortion, but make everyone believe it’s casual “health care.” And, by the way, if you want to pursue your dreams, you’re going to need one if you get pregnant.

Pro-life feminist Destiny Herndon-De la Rosa has a different message for women: “You can do this. You are strong enough.”

According to Destiny, this amounts to telling women what they can’t do. An outspoken feminist herself, that’s something she won’t go along with. Her organization has a different message for women: “You can do this. You are strong enough.” You can have a child and also pursue your dreams.

To back that message up, other women need to be willing to get involved and lend a hand, she said.

Standing Up For the Most Vulnerable Humans

Messages like Destiny’s — that offer women actual empowerment and tell the truth about abortion — are ever necessary. And they’re effective.

Destiny often participates in speaking engagements about abortion, and finds that young people are receptive to pro-life arguments based in science and ethics. This is the “first generation that has really had science and technology available” to observe life inside the womb, she said. They also have vast amounts of information available at their fingertips. If someone tells them a fetus is just a clump of tissue, they can Google “7-week-fetus” and see otherwise, she noted.

But perhaps even more powerful is younger generations’ zeal for “standing up for the oppressed.” Destiny capitalizes on that, challenging the notion that you can defend the “marginalized and the vulnerable” without defending human beings in the womb.

Perhaps that’s why abortion advocates are so bent on removing the “stigma” from abortion. Slowly but surely, they’re losing the war. Younger gens are trending pro-life. Abortion clinics are closing shop.

Messages that paint abortion as good and even necessary for women’s success are ultimately bound to fail. For one, there are too many mothers out there proving otherwise. And women are smarter than that. You can’t keep telling us that the key to our equality lies in killing our own offspring.

As Destiny so accurately said, it defies our very biology.

The Pro-Choicer is Right: Abortion’s a Symptom. But of What?

Abortion Advocate in NYT: The Key to Victory is ‘Cultural Change.’ She’s Right