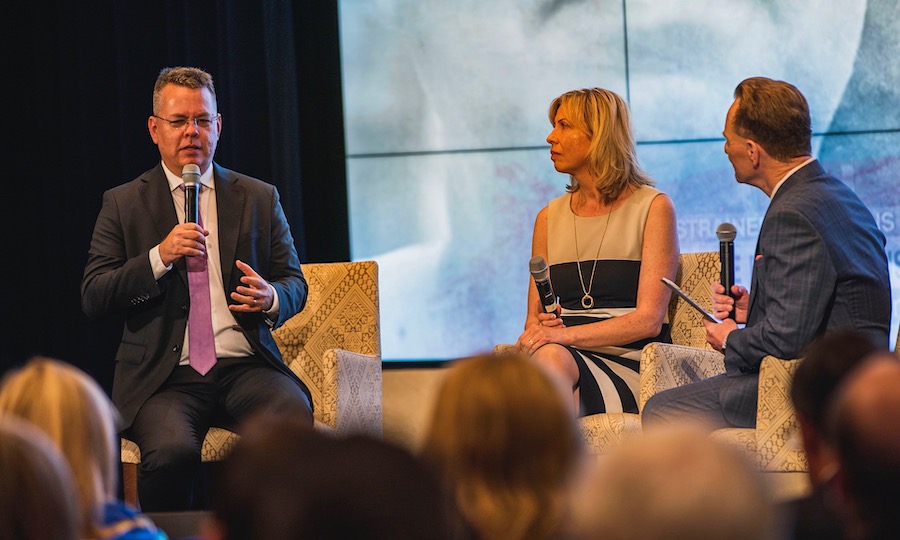 On May 1, 2019, Andrew and Norine Brunson answered questions from National Day of Prayer Task Force president Ronnie Floyd. They addressed Christian leaders gathered for a worship service and formal dinner at Museum of the Bible in Washington, D.C.

Leading up to the National Day of Prayer on Thursday, hundreds of Christian leaders met in Washington, D.C. at two Wednesday events centered on standing up for persecuted believers.

Vice President Mike Pence addressed over 400 pastors and ministry leaders at an evening worship service and formal dinner. It was held at the sixth-floor banquet hall of the Museum of the Bible, overlooking the U.S. Capitol.

“Prayer is important now, maybe more than ever before,” said Pence. “Thank you for praying for freedom-loving people all over the world.”

Hosted by National Day of Prayer Task Force president Ronnie Floyd, the event highlighted Christian missionary Andrew Brunson. In October, he was freed after two years being detained in Turkey. He and his wife Norine spoke with Floyd of the challenging ordeal.

“I’m probably the only convicted terrorist in this room — I hope!” said Brunson. “[Turkey] convicted me of terror crimes, then released me for time served. It was because of my faith.” Pence concluded his remarks referring to the ongoing attempted coup in Venezuela.

The South American nation has recently faced mass starvation and extreme poverty. Since January, many Venezuelans have taken to the streets in protest, seeking to depose longtime dictator Nicolas Maduro.

“Remember the people of Venezuela in your prayers,” said Pence. “[They] have suffered so much under the hand of dictatorship and oppression.”

In an open letter, they called on lobbying firm Squire Patton Boggs to end its representation of China, Qatar and Saudi Arabia. They enumerated these nations’ abuses of religious freedom and human rights.

“To take a paycheck from these countries that are violators of these most basic rights is a betrayal of everything we hold dear,” said Dede Laugesen, executive director of Save the Persecuted Christians.

Behind Bars in Turkey

At the National Day of Prayer dinner hosted by Dr. Ronnie Floyd, Brunson spoke at length of his ministry in Turkey. “We had been there 23 years, planting churches in a Muslim country,” said Brunson. “I thought I was a relatively tough, seasoned missionary. I had been shot at once, and we had a number of death threats.”

In October 2016, Brunson and his wife were summoned to a police station in the city of Izmir. Both were detained, held on charges they did not know.

“Normally, an American would be deported within a day,” said Brunson. “When that didn’t happen, and it kept getting extended, we began to think something was wrong.”

His wife Norine was released 13 days later. Turkish authorities continued to hold Brunson for over two years. He was moved to various high-security prisons, then detained in house arrest in his final three months before release.

“Pastor Brunson [is] someone I’ve gotten to know over the last several years,” said Pence. “He was imprisoned for the alleged crime of dividing and separating Turkey, simply by spreading the gospel of Jesus Christ.”

According to the website Turkey Purge, more than 96,000 people remain unjustly imprisoned in Turkey. Brunson pointed to his humanitarian work with the Kurdish minority ethnic group as a reason for his arrest. The Kurds have long sought autonomy in Turkey, Syria and Iraq, to no avail.

“One of the major things we had been doing in the last few years was working with refugees,” said Brunson. “A lot of them were Kurds, so this had attracted government attention.”

Fight for Faith and Freedom

The Presbyterian missionary confessed his own struggles with doubt and depression during his time behind bars. “People are often surprised when I tell them how very weak I was throughout this,” said Brunson.

He contrasted his inner spiritual conflict with past worship experiences.

“In prison, I thought, Where are you, God? God was silent. I didn’t sense his presence.”

“For years, I had run after the presence of God and tasted it many times,” said Brunson. “In prison, it all left. I thought, Where are you, God? God was silent. I didn’t sense his presence. It wasn’t a felt grace. I was really broken.”

“President Trump stood firm, and we all did,” said Pence. “[We] were determined to see this man of faith released. All of you have prayed for him, [as] Karen and I have.”

The situation turned a corner in July 2018. During the first-ever Ministerial to Advance Religious Freedom convened by the U.S. State Department, Turkey released Brunson to house arrest. It came after Pence made a pointed public rebuke in front of the 88 nations gathered.

If Turkey does not take immediate action to free Pastor Andrew Brunson and send him home to America, the United States will impose significant sanctions on Turkey until this innocent man of faith is free. pic.twitter.com/GM9WohpMRm

“Throughout this process, I kept talking to God [and] returning to him again and again,” said Brunson on Wednesday. He was released to return to the U.S. on October 12.

“By God’s grace, Pastor Andrew Brunson came home,” said Pence. “It is a joy and honor to be with you and Norine tonight. His witness [has] impacted people all over the world.”

President Trump also hosted a faith leaders’ dinner at the White House concurrently on Wednesday evening, with a focus on ending violence against people of faith.

At the National Press Club near the White House, faith leaders spoke out Wednesday afternoon against perpetrators of religious persecution.

Former Congressman Frank Wolf, R-Va., human rights activist Bob Fu of China Aid and others gave remarks. They had signed an open letter, joined by over 40 other leaders.

“To take a paycheck from those violating basic human rights is a betrayal of American values”
Dede Laugesen, Exec Dir of @SavePersecuted pic.twitter.com/VV9dGDXob2

“Foreign governments represented by your firm are among the world’s most aggressive persecutors of people of faith,” the letter states. “It is deeply troubling to us that your prestigious firm [is] providing legal counsel, representation and other services to such nations.”

“It is so powerful in [revealing] what is taking place to many faith groups,” said Wolf. “It is [also] damning, showing why it is not appropriate to represent China and Saudi Arabia.”

He particularly highlighted worsening conditions in China, the world’s most populous nation.

“Hundreds of Protestant pastors have been arrested,” said Wolf. “Roughly 800,000 to some say two million Uighur Muslims are in internment camps in China. The world must speak out. No law firm should represent [such] a country.”

They called on Squire Patton Boggs to cease its lobbying activities on behalf of China, Qatar and Saudi Arabia.

The third largest U.S.-based lobbying firm, SPB has 47 offices in 20 countries. Documentation with the letter shows extensive relationships between SPB and nations known for human rights abuses. The firm has received millions of dollars in fees over many years.

“We respectfully call upon your firm promptly and fully to… cease all work on [their] behalf,” the letter concludes. SPB has not yet responded to the coalition.

Addressing faith leaders, Pence used his time to raise awareness of the crisis in Venezuela. “Today, nine out of 10 people there live in poverty,” said Pence. “Three million people have fled the country to escape oppression and deprivation.”

“The people of Venezuela are people of faith and prayer,” continued Pence. “Our president has stood without apology to see freedom restored. I believe they will one day be free.”

He quoted a Bible verse from Second Corinthians. “For where the Spirit of the Lord is, there is liberty,” said Pence. “That means freedom always wins.”

On Thursday, National Day of Prayer gatherings are being held across America including two in Washington, D.C. The White House hosted faith leaders this morning in the Rose Garden.

This evening, a national observance with music, inspirational messages and prayers will be broadcast from the U.S. Capitol.

Learn more about the National Day of Prayer. Tune in live to Thursday’s national observance from the U.S. Capitol beginning at 7:30pm ET.