Darwinism Is a Cargo Cult 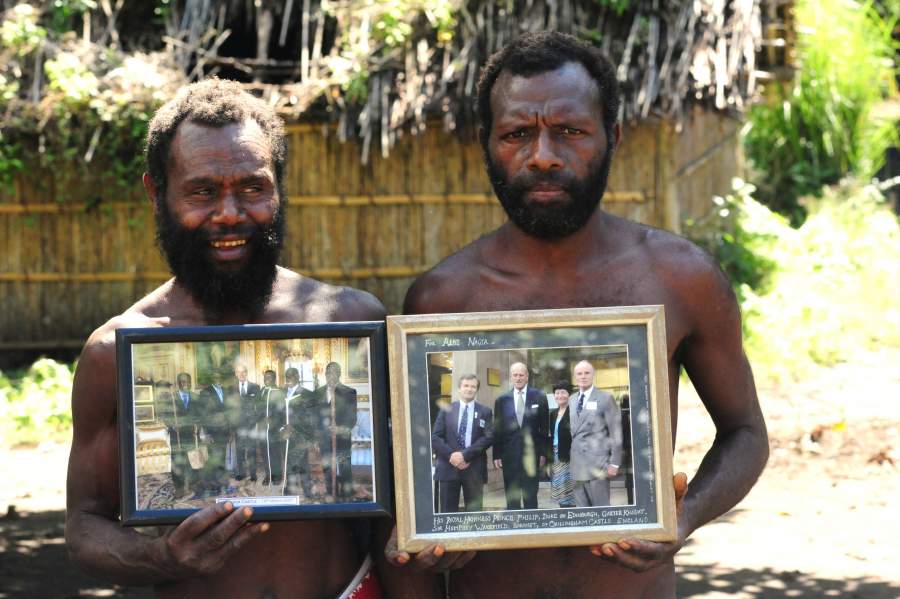 Note to Readers: In the column below, I will be discussing in detail the primitive superstitions of dogmatic materialist scientists. And comparing them to the rather creative religious speculations of Pacific Islanders. I mean no disrespect to the Islanders. They are doing much better than the scientists, considering their limited information.

Perhaps you’ve heard of Cargo Cults. They emerged among some Pacific Island tribesmen who encountered Western travelers. (Especially, during World War II, American pilots.) This encounter was  a religious experience. We shouldn’t sneer. It was only in the early eighteenth century that Westerners firmly separated science from wizardry. Listen to science fiction authors. They’ve noted that any technology sufficiently advanced will appear to the uninitiated as magic. So if aliens appeared who could walk on water and heal the sick? A certain percentage of modern Americans would worship them as gods. Especially in California.

That’s what happened to American airmen and crews during World War II. They appeared with mysterious light sticks and dangerous fire sticks. They climbed out of gleaming ships. And carved out airfields. Then they waved their arms and lit their strange fires, and the Great Birds came down. More airmen climbed out of their bellies. Best of all, these newly landed “gods” weren’t hostile, but friendly.

My point in relating all this is not to sneer at the Pacific Islanders. It’s to compare them to dogmatic Darwinian scientists. Especially those with tenure at places like Harvard and MIT. The natives come out ahead.

The Skymen Bring Us Cargo

They unloaded great boxes of treasure. And gave them out to the natives. Unusual foods and drink, astonishing magic tools and powerful medicines. See Wikipedia here.

The John Frum cult, one of the most widely reported and longest-lived, formed on the island of Tanna, Vanuatu. This movement started before the war, and became a cargo cult afterwards. Cult members worshiped certain unspecified Americans having the name “John Frum” or “Tom Navy” who they claimed had brought cargo to their island during World War II and who they identified as being the spiritual entity who would provide cargo to them in the future.

With the end of the war, the military abandoned the airbases and stopped dropping cargo. … In attempts to get cargo to fall by parachute or land in planes or ships again, islanders imitated the same practices they had seen the soldiers, sailors, and airmen use.

Cult behaviors usually involved mimicking the day-to-day activities and dress styles of US soldiers, such as performing parade ground drills with wooden or salvaged rifles. The islanders carved headphones from wood and wore them while sitting in fabricated control towers. They waved the landing signals while standing on the runways. They lit signal fires and torches to light up runways and lighthouses.

In a form of sympathetic magic, many built life-size replicas of airplanes out of straw and cut new military-style landing strips out of the jungle, hoping to attract more airplanes.

Prince Philip, Come and Save Us

I know we shouldn’t make fun of other people’s religions. (And I know some people make an exception to that for Christianity.) But it would take man with a heart of stone not to giggle a bit at this. The funniest twist? The rise of a Cargo Cult that venerates Britain’s Prince Philip as a god:

It is unclear just when this belief came about, but it was probably some time in the 1950s or 1960s. It was strengthened by the royal couple’s official visit to Vanuatu in 1974, when a few villagers had the opportunity to actually see Prince Philip from a distance. …

Champion suggested that Prince Philip send them a portrait of himself. He agreed and sent a signed official photograph. The villagers responded by sending him a traditional pig-killing club called a nal-nal. In compliance with their request, the Prince sent a photograph of himself posing with the club.

Now many of us revere Prince Philip for his wry wit. Or his disdain for political correctness. Still, we don’t think him a god. But then he’s never posed with our nal-nals, has he? That might change our minds in a jiffy.

The Primitives of Cambridge, Massachusetts

My point in relating all this is not to sneer at the Pacific Islanders. It’s to compare them to dogmatic Darwinian scientists. Especially those with tenure at places like Harvard and MIT.

The natives come out ahead. They might be technically mistaken about Prince Philip’s ontological status. But these are human beings confronted with a staggering amount of new information, all at once. They did their best to make sense of it. They did so in terms that their culture offered. I’d say they showed immense open-mindedness and mental agility.

The Divine Foot in the Door

Especially compared to scientists like Richard Lewontin. This eminent Darwinian famously confessed his dogmatic adherence to materialism, regardless of arguments or evidence. Read him in The New York Review of Books.

Our willingness to accept scientific claims that are against common sense is the key to an understanding of the real struggle between science and the supernatural. We take the side of science in spite of the patent absurdity of some of its constructs, in spite of its failure to fulfill many of its extravagant promises of health and life, in spite of the tolerance of the scientific community for unsubstantiated just-so stories, because we have a prior commitment, a commitment to materialism.

It is not that the methods and institutions of science somehow compel us to accept a material explanation of the phenomenal world, but, on the contrary, that we are forced by our a priori adherence to material causes to create an apparatus of investigation and a set of concepts that produce material explanations, no matter how counter-intuitive, no matter how mystifying to the uninitiated. Moreover, that materialism is absolute, for we cannot allow a Divine Foot in the door.

The Cargo Cultists had hardly any choice. They saw men with fantastic powers. By their lights, they must be gods. Not omnipotent, omniscient gods like our One God. But clearly superhuman. So why not be safe and venerate them? Why not learn from their actions how to produce more precious “Cargo”? The Islanders’ efforts to build airfields and mimic landing crews were perfectly sensible. They just lacked information, and the right frame of reference.

The Islanders’ efforts to build airfields and mimic landing crews were perfectly sensible. They just lacked information, and the right frame of reference. By contrast, dogmatic materialists like Lewontin rule out all new information.

By contrast, dogmatic materialists like Lewontin rule out all new information. They scoff at contrary arguments in advance. And they hunt down “heretics” like biologist Matti Leisola. They rally angry mobs, to stop them from speaking, publishing or even earning a living. That’s because Leisola sees Intelligent Design as the best explanation of human life. (As did great scientists of the past such as Leibniz, Newton and Pascal.) Instead of the Darwinian answer, which amounts to: “We dunno, it just randomly happened. But it took a really long time.”

In fact, dogmatic materialists act like intolerant witch doctors. They’re terrified of new insights or data. These threaten their mystical power over adherents. By comparison, the Cargo Cultists responded to shocking new information with admirable rationality.

In it, genius nanotech inventor and biochemist Dr. James Tour exposes the ugly truth about materialist science on the origin of life. We know absolutely nothing. This after sixty years of research and experiments. After endless efforts to zap a “primordial stew” of pre-organic chemicals. Or to find any other way to explain the emergence of life.

Of any life. Even the simplest organism, much less the exquisitely calibrated, self-replicating mechanism that is a bacteria cell. Tour mocks scientists who strip out pieces of elaborate biological equipment from one set of cells, then cobble them together. The claim? That they’re one step closer to “creating life.” Watch Tour in the video. He notes that they’re basically swapping the engine from an Edsel into a Maserati. Then claiming they have invented the automobile.

Or they are Cargo Cultists building an airfield. Confronted with the elaborate, complex mechanisms of even the smallest form of life, the materialists are panicking. They’re desperate to replicate the profound, intelligent design that pervades all nature. But they must disguise it behind a veneer of randomness. They must respect their own religious taboos.

Their efforts inevitably fail. So these modern primitives turn to their own Prince Philip figure. To the mummified authority of Charles Darwin himself. He’s the god that gave men like Richard Lewontin their nal-nals.