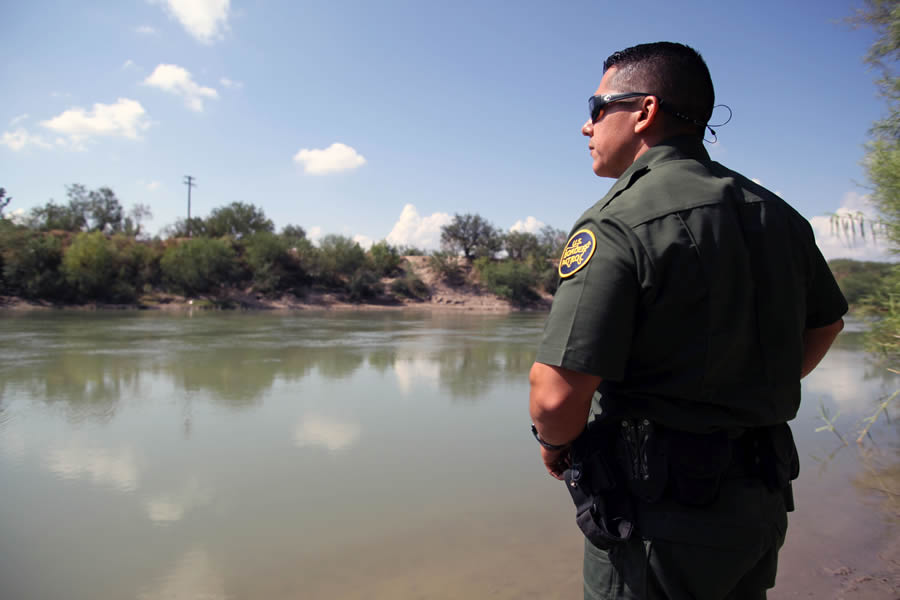 LAREDO, Texas—Temperatures along the southwest border here average about 90 degrees, and inside the trailer of an 18-wheeler can go up to 120 degrees, said Joel Martinez, deputy chief for the U.S. Border Patrol’s Laredo sector.

“We had a 18-wheeler with 120 people in the back. I think seven of them were juveniles,” Martinez told The Daily Signal about a catch of illegal immigrants in May.

“So you can imagine what the consequence would be if they got past us, and they keep driving down the highway with that many people in the back, in the middle of the summer for Laredo. It’s torture.”

Such transport can be deadly for migrants willing to risk being smuggled into the United States, he said.

“Unfortunately, we’ve seen what happens when these unscrupulous smugglers put people behind, in trailers or in trains. People die,” Martinez added.

“Luckily for them [the 120 in the tractor-trailer], our agents were doing their job, and they managed to find them before anything bad happened to them.”

#BorderPatrol agents at an immigration checkpoint in Laredo rescued 120 illegal aliens–including 11 juveniles–locked in the back of a tractor trailer. Details: https://t.co/ACwHBErYxT pic.twitter.com/n8qHvgvgFl

Addressing context in the midst of unfortunate migrant deaths, Martinez estimated that Border Patrol agents in his sector alone save at least one life per day.

Laredo is a city of about 250,000 located along the Rio Grande River, the Mexican city of Nuevo Laredo in easy sight. It’s a location where the Border Patrol apprehends about 120 illegal immigrants per day. Agents have caught about 24,000 so far this fiscal year, which began in October.

Politicians and certain media outlets breathlessly critique each case in which an illegal immigrant died in the custody of U.S. Customs and Border Protection, the agency that includes the Border Patrol.

The family of a Guatemalan woman, represented by the American Civil Liberties Union, recently sued CBP for $100 million in connection with her shooting death last May.

“I feel like, and the evidence is really clear, that this is intentional. It’s a policy choice,” Underwood said during a House Homeland Security Committee hearing May 22.

The reality on the ground is that agents are providing medical attention to illegal border crossers, Martinez told The Daily Signal in Laredo.

“Daily, our agents save somebody’s life,” Martinez said. “I’m not over-exaggerating when I say that when we get some of these people, they are pretty bad off as far as dehydration and everything else. I mean, they’re exhausted, and they barely make that swim across the river. So when our agents get them, they’re in pretty bad shape.”

“We have one of the largest EMT — emergency medical technician — corps in the nation,” Martinez said. “We have 125 agents out there, at any time, patrolling the streets. And they’re all either paramedics or EMTs.”

Martinez said unfortunate deaths occur in border sectors, but after agents made efforts to get medical attention.

“Are bad things going to happen? Are we going to lose somebody? Unfortunately, that’s inevitable when you’re dealing with the kind of numbers that we’re dealing with right now,” Martinez said.

“It’s just we’re overwhelmed, and that’s the results of us being overwhelmed. Unfortunately, bad things are going to happen.” “Just about every agent has been involved in a humanitarian aspect,” Border Patrol Agent Narcizo Ramos says.

‘I Needed to Act’

Border Patrol agents who spoke to The Daily Signal said they see a strong humanitarian side to their job.

Among agents recognized for saving lives is Narcizo Ramos, 41, a native of Laredo and a 19-year veteran of the Border Patrol.

“I witnessed teenagers fall into a creek in their car and I pulled them out from the creek,” Ramos said in recalling a 2003 incident. “Just about every agent has been involved in a humanitarian aspect.”

Ramos won an Employee of the Year Award for heroism because of his action.

“I would do it again, not for that reason,” he said. “It happened in front of me and I needed to act.”

Martinez said he was notified May 22 of how agents’ humanitarian work in feeding and caring for illegal immigrants produced solid law enforcement results in fighting a drug cartel, as agents also interviewed those in custody.

The Laredo sector is on the front lines of dealing with the Cartel del Noreste, a violent Mexican drug cartel formerly known as the Zetas.

The drug cartel controls all illegal immigration into the Laredo area and punishes anyone who tries to sneak across the border without its assistance, Border Patrol agents said.

“So we just got a conviction on two of them on our side, on the American side. When they did come across, we were able to identify them.”

Regardless of the situation we’re up against, our agents never forget our mission. … Even though our stations are at 100% capacity, they still take the time to take it a step further and find out what other aspects these criminal organizations are up to. And now we got a consequence on some of these smugglers, which I think it says wonders about what our guys are doing every day. “They are at a point where they don’t want to get caught, because they’ve already invested so much money with the smugglers,” Border Patrol Agent Rafael Garza says.

‘We Have to Be Compassionate’

Rafael Garza, 43, is a 23-year veteran of the Border Patrol.

He learned early in his career, Garza said, that “compassion comes first; we are human beings first.”

“There was a group of about 15. We encountered the group at the river,” Garza recalled to The Daily Signal as he stood close to a crossing of the Rio Grande River, which separates Texas and Mexico.

It was in the early 2000s, he said, and the incident occurred nearby.

“Everybody just ran all over the place. There was a 5-year-old left behind. At that time, the 5-year-old was crying, badly dehydrated. We knew they were close by, but they were hiding — about three agents were trying to encompass the whole area.”

The agents began calling for someone to come out for the child, Garza said.

“It was at a point that, hey, if you have any decency, it’s a 5-year-old child here. So we knew he was probably accompanied by a family member. Where are you at?” Garza recalled. “Come out. Help us out.”

“It wasn’t until after about 20-25 minutes that the mom came out and said, ‘That’s my child.’ But they are at a point where they don’t want to get caught, because they’ve already invested so much money with the smugglers.”

The incident left a lasting impression on Garza’s approach to his job.

“That just stood out to me, of how desperate some of these people are,” Garza said. “I was glad nothing bad happened to the child or to the family member. That stood out to me in my career, where we have to be compassionate and not be like everybody deems us, as just doing our job.”

‘A Lot of Them Are Sick’

On their journey, illegal border crossers sometimes catch diseases that frequently must be treated in U.S. hospitals in border cities and towns.

Such medical care is among many costly factors for taxpayers created by illegal immigrants who put themselves at risk of injury and illness, said Greg Burwell, division chief of the Border Patrol’s Laredo sector.

“What about some of the costs, the taxpayer dollars that are involved, in dealing with all these people that are injured that have to go to the hospital?” Burwell asked in an interview with The Daily Signal.

“We’re helping out the next sector over from us. We’re taking about 188 people per day, four buses full of family-unit people from Central America. And what we’ve seen with the people is that a lot of them have to go to the hospital.”

“A lot of them are sick,” Burwell said, adding:

We’ve seen measles, mumps, chicken pox, different things. This fiscal year so far — just Laredo sector, and remember that we’re one of the sectors that has the fewest apprehensions on the southwest border — and we’ve already [seen] taxpayer dollars to the tune of nearly $10 million go to doctors’ care.

To the hospital visits, to the doctors that are dealing with these individuals. You can imagine that if $10 million is spent in this sector, think how many is spent borderwide. I mean, we’re talking hundreds of millions.

Fred Lucas is the White House correspondent for The Daily Signal and co-host of “The Right Side of History” podcast. Send an email to Fred. Follow him @FredLucasWH.