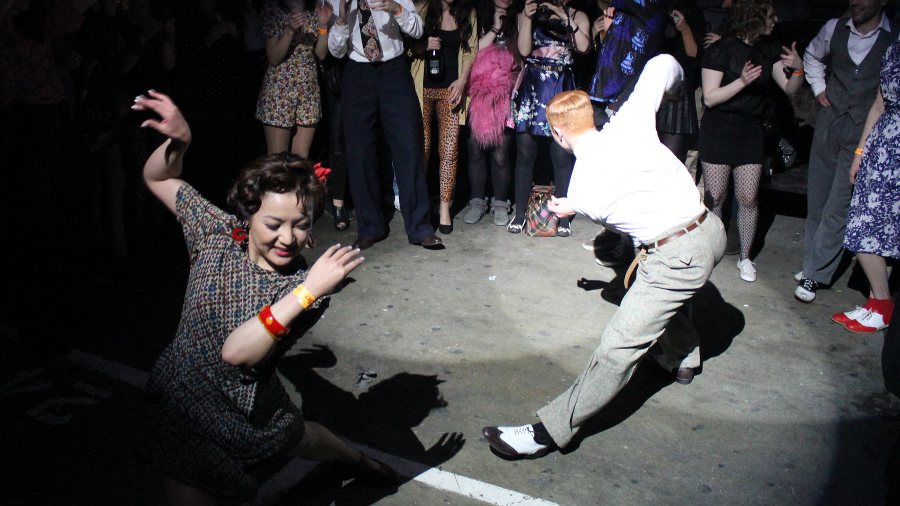 Results from the 2019 Youth Behavioral Risk Factor Surveillance System show that 18.8% of high school students seriously considered attempting suicide and 8.9% actually attempted suicide. The cost of suicide attempts in the United States in 2019 was estimated to be $70 billion. The epidemic seems to be hitting teenage girls particularly hard.

While it’s obvious that the proper care for depression is to consult with a doctor and minister and receive counseling from a professional, there are some things that might help alleviate our COVID depression.

Dance! And Be Transformed

One of them is swing dancing. The COVID catastrophe hit teens right at the time in their lives when they would be socializing with their peers. As Tucker Carlson has pointed out, it doesn’t help that the young are addicted to their phones.

Sometimes the best treatment for something is to do its opposite. The antipode to the COVID misery is swing dancing. The transformative power of dancing is mentioned throughout the Bible:

“You have turned for me my mourning into dancing; you have loosed my sackcloth and clothed me with gladness.” Psalm 30:11

“Let them praise his name with dancing, making melody to him with tambourine and lyre!” Psalm 149:3

“They send out their little boys like a flock, and their children dance.” Job 21:11

I started swing dancing in the early 1990s, shortly after I quit drinking. I was a jock when I was younger and the lack of booze left me with a lot of excess energy. I decided to learn the Lindy Hop, a dance that was born in Harlem in the 1920s, at the then-famous Savoy Ballroom on the corner of 140th Street and Lenox Avenue. I soon discovered that in dancing I was experiencing the kind of euphoria I felt as an athlete.

In his article “The Spirit of Athletics,” journalist Mark Barna recounts some of the “emotional and physical peaks” reached by athletes. Barna recounts a quote from former NFL great Joe Greene: “It’s almost like being possessed. [But while] it is a kind of frenzy, of wild action … you are never out of control. You have great awareness of everything that is happening around you and your part in the whole.”

Please note: while looking nice is important, you can dress the way you want at a swing dance. I find the frilly sheen and Vegas glitter of Dancing with the Stars outfits over the top.

Dancing also fosters community. The place where I dance, Glen Echo Park in Maryland, is one of the world’s great “third places.” In his book The Great Good Place: Cafes, Coffee Shops, Community Centers, Beauty Parlors, General Stores, Bars, Hangouts, and How They Get You Through the Day, sociologist Ray Oldenburg examines the broad social, spiritual, and psychological benefits of “third places,” those spots outside of work and home that offer solace from the rat race and requirements of family. These places serve as democratic meeting spots and encourage the manners and self-restraint that govern them.

In third places, writes Oldenburg, a natural kind of “leveling” takes place. Unlike work, there is no hierarchy of status and power: “those not high on the totems of accomplishment or popularity are enjoined, accepted, embraced, and enjoyed despite their ‘failings’ in their career or the marketplace. There is more to the individual than his or her status indicates.”

Formal dance halls are also places where common-sense etiquette reigns. If you ask a women to dance and she says no, it is inappropriate to pursue the matter any further. In Swing, Bop and Hand Dancing, a documentary about the history of swing and hand dancing, a modern offshoot of swing done primarily in black communities, Howard University dance historian Beverly Lindsay sums it up nicely:

The benefits of swing go far beyond just learning cool moves, she says. In the old days of swing, there were entire rituals surrounding the dance. Men went and picked up their dates, then escorted them to the dance. They learned how to dress up, and how to behave. They learned how to ask a girl to dance, lead her onto the dance floor, then, at the end of the song, return her from where she had come.

In the post-COVID world, everyone, but especially teens, just wants to return from where we had come. The starting point may be the dance floor.

Finding Rest: A Survivor’s Guide to Navigating the Valleys of Anxiety, Faith and Life: a Must-Read During the Pandemic