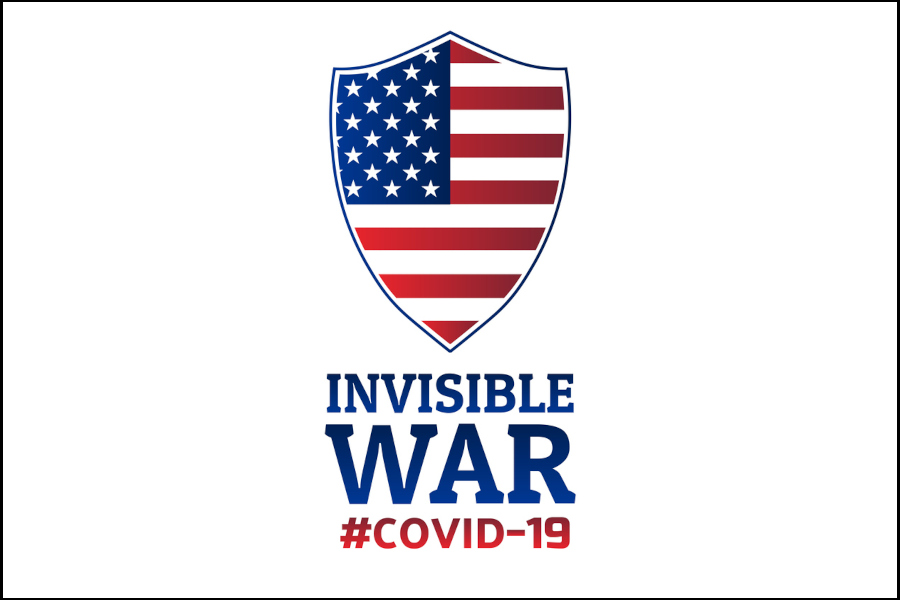 My son-in-law is currently away on a long deployment, helping fight our nation’s longest-ever war. He’s there for the same reason my father volunteered to fight during World War II. It’s the same purpose that’s driven the best of American warriors since the Revolution: the fight for freedom.

For the past year we’ve been at war against the “invisible enemy,” the Coronavirus. In this war, though, the word “freedom” has been conspicuously missing from leaders’ language. Worse yet, when civilians speak it and try to live it, their own leaders arrest them, fine them, imprison them.

Something is drastically wrong here.

All wars are terrible, but this one is cruel in all new kinds of ways. The enemy has invaded virtually every town in America. It kills civilians, with a special preference for older and sicker ones. We must defend ourselves as if our lives depend on it. In fact our lives do depend on it, for many of us. If it really is a war, though, should it not also be for freedom? How have we forgotten that this time?

Passive Compliance? A New Normal? What About Freedom?

Imagine cruel aliens invading our country from outer space. They leave our soldiers mostly alone, aiming instead at the sick and the elderly. “We’re picking people at random,” they tell us. “We’ll torture them with horrible illness, and we’re going to kill hundreds of thousands. You can’t stop us, you can only slow us down a bit. Here’s how: Give up all your most basic freedoms. Shut down the shops and restaurants. No family gatherings. No church. Certainly no travel. We’re watching. When we see you complying, we’ll cut back on the killing. Not much, but some. We’re not staying forever, maybe one year, maybe two. We’ll leave when we’ve decided we’ve done enough.”

If our leaders responded as they have with the Coronavirus, they’d implore us to accept the aliens’ terms. “Our losses have been awful, with more to come,” they’d say, but, “It could have been worse. What else did you want us to do?”

Meanwhile the aliens’ secret plan is to remain until we’re accustomed to living in bondage, we’d start thinking of it as normal. They’d even smile their weird alien smile, hearing leaders talk about “a return to a new normal,” knowing how effectively they’d reset the meaning of “normal.”

No analogy is perfect, and aliens are a fanciful invention, but doesn’t that scenario sound awfully familiar anyway?

To Fight for Lives and Freedom

The two stand in tension, naturally. “How much freedom shall we protect during this fight? How many lives ought we put on the line for it?” The answer must be some number greater than zero.

A war that accepts needless casualties is a wrong war. So also is a war not fought for the sake of freedom. Both objectives matter; both must be weighed in the strategic balance.

If it were possible fully to pursue safety and freedom, both at the same time, without loss or cost to either objective, that would have been the obvious right approach. Obviously it isn’t. So one must sacrifice one or the other completely, or find a way to balance the damages.

The world’s strategy for much of the past year has been to surrender all our freedoms as if they don’t matter. But they do. Freedom mattered in 1776, in the 1910s, and in the 1940s. Slaves’ freedom mattered in the 1860s. We have always fought for freedom, because freedom has always mattered.

I do not say the balance of lives and freedoms is an easy one to maintain. How hard must it be for presidents and military officers to sometimes send soldiers to die? Yet how much harder would it be to say, “We must give up an unknown number of civilian lives in defense of freedom.”

You yourself may be grieving the loss of a loved one, an unwilling civilian, randomly conscripted and cruelly made a casualty in this fight. I am so sad for your loss! Please do not think my point is that freedom is the only thing or even the main thing during the course of this war. To be at war is to give up many things. Americans at home sacrificed much for the war effort in the last world war.

There is always much to weigh in the delicate balance of human lives and human freedom, and those decisions will remain difficult for the duration of this fight. Most of our leaders, though, have simply skirted that dilemma by giving up almost completely on freedom.

I don’t think they even know what they’re fighting for. We never hear them articulate the end game, the conditions of victory. A “return to normal,” they might call it, as if “normal” weren’t tainted by the experiences of this COVID-19 year.

Will we accept that? Can we not insist on freedom as the end game? Can we not tell them the only acceptable condition of victory is the full restoration of our former freedoms? If we do, will they pay any attention? Do they believe that’s the goal? Is there any evidence they’ve even given it any thought?

A war that accepts needless casualties is a wrong war. So also is a war not fought for the sake of freedom. Both objectives matter; both must be weighed in the strategic balance. By pointing every strategy toward the first objective — while tearing the second to shreds like a desecrated flag — our leaders have been running this COVID war wrong from the beginning.

Don’t Surrender What My Father Fought For!

My father volunteered for the Army Air Corps in World War II, knowing full well he could die very young, very far from home. Today he’s a sharp-minded 97-year-old veteran, a resident in an assistant living center in the town where I grew up. For most of the past year he hasn’t been allowed to leave the building without long quarantines upon his return. Month after month he was allowed no visitors. He was locked in, they were locked out.

Last month the place finally opened up its visitor rules enough to be worth my driving the 300-plus miles to go up there this weekend. Visitor access rules remain erratic, so I still might not see him, but I really need to try.

And when I finally do see him again, I’ll ask him this: “Dad, you offered your life in WWII for the sake of America’s and other people’s freedom. Do you think anyone remembers that was our purpose there? Why are we locking up our own people, fining them, and confining them? Do you think maybe we’ve finally lost that war?”

I won’t settle for it. I implore you not to accept it, either. Don’t let freedom slip away. Fight for it!