‘Cool Story’ About Jesus? You Have No Idea 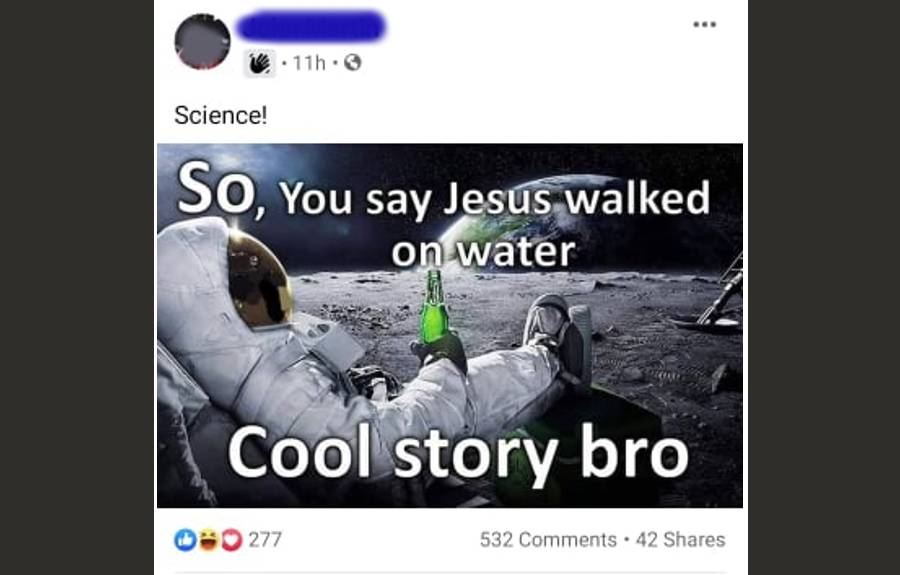 A friend messaged me with and asked, “What do you do with something like this?” He sent the meme you see above. My first thought was that he should ignore it. It may look vaguely like some kind of argument that there’s something wrong with the story of Jesus, but snark isn’t argument. If they don’t own at least some responsibility to show that they’ve got a case — if they don’t accept burden of proof for whatever they’re trying to convince you of — then it’s not argument, it’s not a case against Christ, it’s nothing but bait.

They want to put you in a place where you’re going to have to bear that burden. And where they can toss more snark at you, almost as if they’d actually showed up for a real debate, but not really.

That’s my usual answer to nonsense like that, and it flows out of me even faster where you’ve got the astronaut kicking back with a beer on the moon, smacking his lips and saying, “Science!” The sarcasm isn’t, shall we say, terribly well concealed. The world would be a far better place if everyone quit taking sarcasm bait on Facebook.

So that’s how I started answering my friend. And then I realized it was all upside down. Cool story? This meme doesn’t know a fraction of it. I can show you in just two questions, though.

How Cool Is That?

First, how many men in history have walked on the moon? Not many, and it was hard. It took incredible science to get us there. We know how to do it now, though. The science is all set to go; all it would take is some money and some political will (and maybe a good reason to do it, too), and we’d be right back up there again. I can remember watching on TV when Armstrong stepped off that ladder onto the moon dust, and I know what a big deal it was. Not so big we couldn’t do it again if we wanted, though.

So now we come to our second question. How many men in history — or even in myth or literature — have lived lives of absolute power, able to do anything they wanted, and never did anything with that power except help others? How many of them willingly held back all their power and let themselves be put to death in place of others?

The answer, as Stream contributor David Marshall, common-sense scholar friend Lydia McGrew, and I discussed in a rousing hour of video yesterday (hosted by friend Brad Cooper), is exactly one: Jesus Christ.

Compared to that, what science did getting us to the moon was really rather ordinary. Don’t get me wrong: Put it up against any other standard, and there was nothing ordinary about it. I’ve seen and heard U.S. space shuttles taking off. I could not believe how much power they expended. I timed how long we could hear it; if I remember right it was well over a minute. At one minute the spacecraft was seven miles high and about that same distance downrange, and it was still loud.

That may be an unscientific assessment, but I don’t mind. You’d have been impressed, too, if you’d been there; yet was still far less power than the Saturn V rockets used going to the moon. The mind boggles at what it must have taken to land up there and then return here again safely.

Not as Good as Jesus

Still it’s something we could do, and we could do it again if we wanted. Now, try to find someone who can live a life of perfect, self-sacrificial love like Jesus did. If you did, I think you’d be a lot less skeptical that he could walk on water, too. But you won’t. Jesus was literally one of a kind for all time.

Cool story? Yeah. Better than that, even. The best of all time. But maybe you’re wondering still if it’s a true story. Watch the video. You’ll see. It’s an answer the guy who thought he was baiting Christians could stand to discover, too.

The Crucial Missing Piece In Our Witness for Christ Today