Consider the Pokémon of the Field: Children are Isolated From Nature 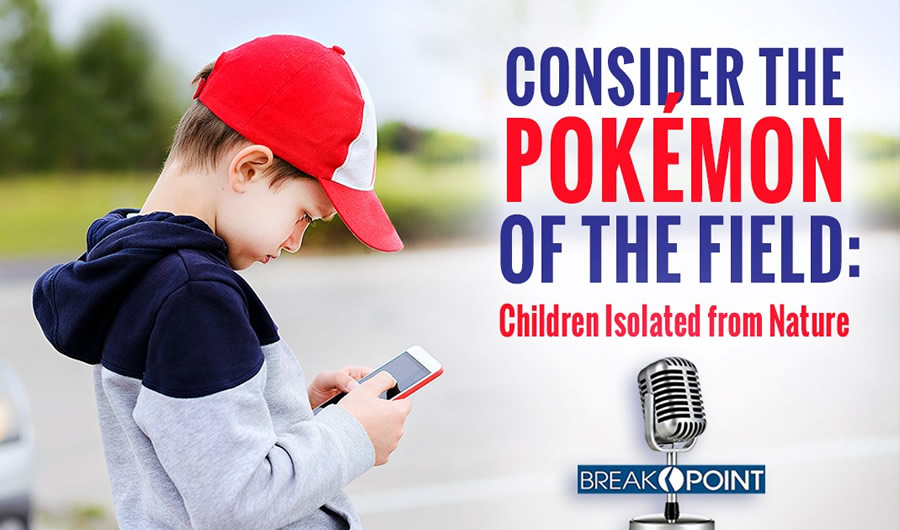 Could our technology-filled lives be keeping our kids from knowing God and Scripture in a crucial way?

I doubt anyone listening to Jesus when He said, “Consider the lilies of the field,” scratched their heads and asked Him, “What are lilies?” But it’s not difficult to imagine a modern audience asking Christ to explain His flower references.

Writing at The Guardian, Robert Macfarlane spotlights a study published in “Science” by researchers from Cambridge. Using picture cards, these scientists asked children to identify common British animal and plant species like bluebells, herons, otters, oak trees, badgers, and wrens. The kids, who were between the ages of eight and eleven, couldn’t even identify half of the pictures.

They were then shown make-believe creatures from the Japanese card game and cartoon series, Pokémon. These included animated oddities like the Arbok, the Bulbasaur, and the Wigglypuff.

The kids were able to identify a staggering eighty percent of these imaginary critters, by name!

“Young children clearly have tremendous capacity” for learning about living things, wrote the researches, but they’re “currently more inspired by synthetic subjects” than by “living creatures.” This famine of knowledge about the natural world, they conclude, is linked to kids’ “growing isolation from it.”

Now why does any of this matter? Well, because a manmade world filled with manmade creatures is a world drained of wonder. Barely three generations ago, looking up at the Milky Way was a nearly universal human experience. Now only those lucky enough to have camped out West or spent a night at sea have beheld the stars as God created them.

That’s more than just sad. It’s a worldview problem. The Bible constantly refers to nature. We first meet God in Scripture not as Savior or Father, but as Creator. The Psalmist invites us to “consider the heavens” and writes that they “declare the Glory of God.” When he compares his thirst for God to the way a deer runs toward water, most people in the modern world miss the impact of those words. They’ve never seen a deer do that.

Much of Job is an appeal to nature as proof of God’s power and sovereignty. And Jesus Himself took scarcely a breath between natural metaphors. “Birds have nests and foxes have dens,” He said, “yet the son of man has no place to lay his head.”

For the modern reader — especially the modern child — many of these references lack their original power. Quite simply, our isolation from nature has become isolation from God’s Word. Cocooned in our manmade world of climate-controlled homes, cars, subways, and high-rises, we’re finding it easier to live as practical atheists. I suspect even those of us who believe in the God of creation lack the wonder our ancestors felt toward Him while lost in a starry sky, or stooped beside a flower.

Fortunately, the solution is as easy as stepping outside. We may have city lights and the glow of touch screens to obscure our view, but God’s world is still near at hand, even right here in New York City where I live.

One of my favorite things about America is our breathtaking collection of national and state parks. So why not schedule a visit?

So for you and your kids, simple things can make a huge difference. You can instill in them a sense of awe for the natural world by visiting a community garden. Pick up books on birds or plants from the library and take the time to notice and identify each living thing.

One of my favorite things about America is our breathtaking collection of national and state parks, many of which boast wonders the Psalmist would envy. So why not schedule a visit?

Do not underestimate the power of these experiences. They will shape your child’s worldview and yours. And they will inspire wonder in the God of creation as no Pokémon ever could.