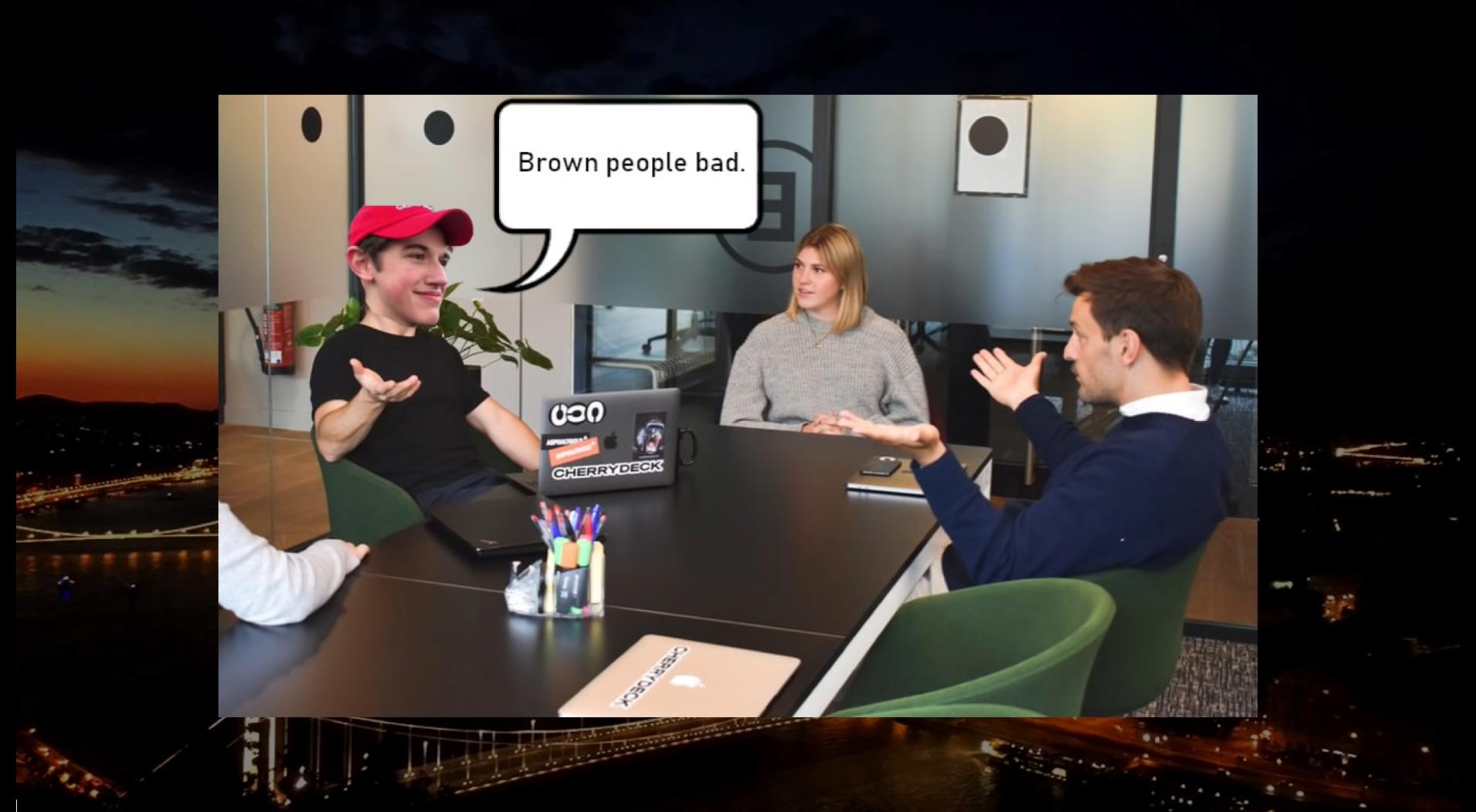 Want a good laugh? You’ll love this, but only if you’re not sending a child to university this year. It’s a howler.

A blogger friend clued me in on a seriously crazy 6-minute video (see it below) by “Adam Something,” a European academic explaining why academia is left-leaning. I’ll give you his short answer: “Conservative people stupid.” He didn’t use that exact phrase, but close enough.

He admits universities lean leftward: He’s never even met a conservative on campus, he tells us. It’s not because we’re being locked out, though. It’s because we’re troglodytes. Wrong on everything. Stupid on everything. Conservatism has been “proven wrong” on every “major cultural war issue.” Every creationist’s research paper, if true to principle, would be exactly four words long: “God done did it.” Liberals have serious discussions on minorities. Conservatives say, “Brown people bad.”

Not laughing yet? Don’t worry, we’ll get there.

My source at the Shadow to Light blog says, “The man traffics in stereotypes.” I’ll say he does. The blog post continues,

What’s more, Adam then spends the rest of his video propping up his stereotypes by attacking straw men version of conservatives. It figures. Simple-minded people like stereotypes because they keep things simple. In addition, they need to argue against straw men because that is all their simple minds can handle.

I’ll bet Adam Something wouldn’t like that said about him. Too bad. It’s true.

“We know that trans rights don’t lead to the end of two genders,” he says. Really? Has he read any trans activist literature? “We know that … it won’t led to a mass sex-change operation wave for gullible children.” He’s a social scientist, or something like that, yet he’s never heard of the social contagion that’s led ten times as many British youth to call themselves transgender? Australia, too, is seeing a huge wave of kids saying they want treatment for it. Statistics for the United States are harder to find, but it appears that trans “treatments” for female teens quadrupled in one year alone recently.

This man doesn’t know what he thinks he knows. But he does know conservative people stupid.

They Know Civilization’s Outcome, They’ve Studied Over Ten Years of It Now!

“We know,” he goes on, “immigration doesn’t lead to the fall of Western civilization.” Really? Based on which long-term experiment? We’ve got two decades of relevant data, maybe three. Is that the time scale on which civilizations progress?

And which theory supports that conclusion? Isn’t it just a tiny bit possible that admitting millions of Muslims into Europe — people who are religiously and ideologically opposed to Western civilization — might have some effect on the culture of the continent?

He doesn’t know that won’t contribute to the fall of Western civilization there; he couldn’t possibly know it. But he does know conservative people stupid.

More “Wisdom” From the Anointed Left

He’s got lots more like that to offer. “We know that women’s right to an abortion is a mostly beneficial thing.” Beneficial to whom? How did he come to “know” the baby in the womb has no morally significant status as a human being? The left’s theories on that are gerrymandered theory, arbitrary, rigged conveniently to fit their preferred answer. That’s not knowing the real answer, that’s making up the answer you want and demanding reality kneel down and bow before you.

Stupidity? Yes, and Now You Can Laugh

Laughing yet? Probably not. Now’s your chance, though: Adam Something tells us the reason the left dominates academia is because, unlike conservatives, liberals value “such traits as rationality, open-mindedness, curiosity, and a readiness to change one’s minds in the face of new evidence.”

That’s who he thinks he is? Really? I’m speechless. Oh, my goodness. I had to stop right there for a moment and get over it. I’ve written some hard articles, but rarely one that I couldn’t continue on account of laughing too hard.

He didn’t say,”Conservative people stupid” in those precise words. but no matter. He was close enough. And he demonstrated his own stupidity in the process.

There is stupidity on campus, and Adam something proves it. That’s stupid as in the closely related stupefy: “to cause (someone) to be unable to think clearly or be sensitive to the surroundings.” The adjective form, “stupefied,” often refers to one who’s taken mind-addling drugs.

The man is indeed unaware of his surroundings. Or maybe not: Maybe he’s reflecting his surroundings exactly. He’s never had a serious conversation with a conservative, he says, so his view of us comes from other liberals, who undoubtedly got it from other liberals. That’s being open to new evidence, right? No, count it instead as mind-addling instead. He’s stupefied either way.

It’s crazy; hilarious, even. He thinks he’s open to evidence and new ideas. Evidence? Where’s his evidence that Muslim immigration to Europe is harmless forever?

Where’s his evidence on creationist science? Francis Collins, head of the National Institutes of Health and former director of the Human Genome Project, believes in God as creator. So did virtually all the early founders of modern science. And James Clerk Maxwell. Carolus Linnaeus. Michael Faraday. Even Isaac Newton. Wernher von Braun, rocket scientist of all rocket scientists, was a young-earth creationist.

No matter, though. “They all look alike to me,” says the bigot. “Conservative people stupid. Christian people stupid, too.” 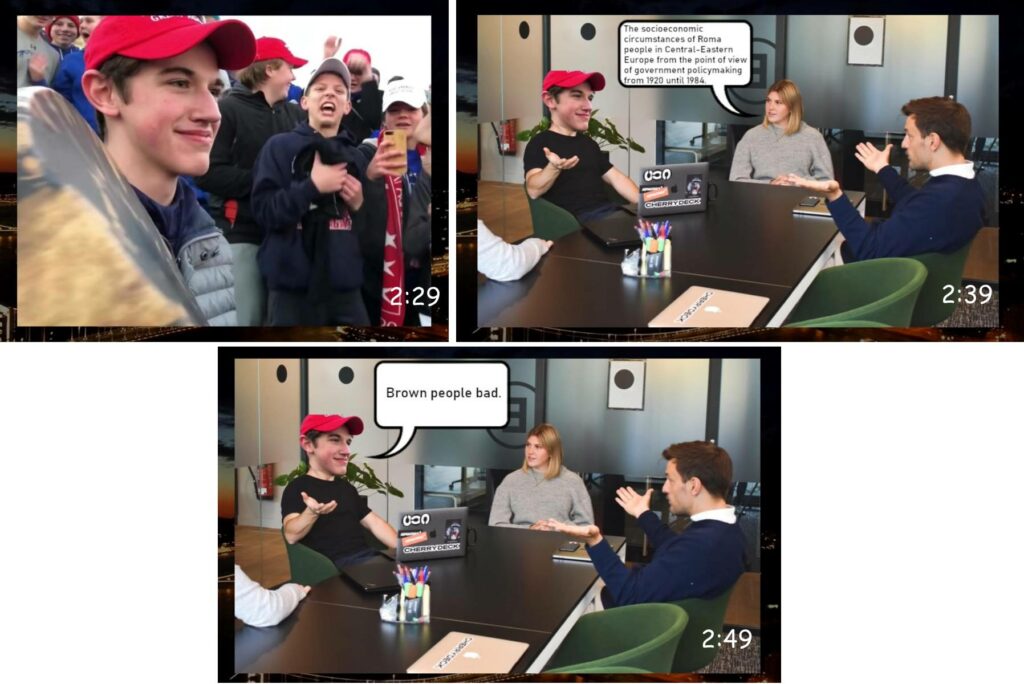 And that brings us to one last howler before we go. Adam Something says, “Modern conservatism has become this amorphous protest movement against the left’s imagined hypocrisy.” Ri-i-ight. Did you imagine hypocrisy here? As if he demonstrated none of it himself?

Yes, it’s that ridiculous. Unfortunately it’s also real. Maybe not always this extreme, but don’t be too sure of that.

That means that if you’ve got a child in college, you’ll have to temper laughter with reality. Adam Something was right to this extent: Both in Europe and in North America, you’ll find zero to very few conservatives in many university departments. Instead you’ll find something like this insanely stupefied condescension toward conservatism. Toward you, that is. Leftist profs — of which there are many — want your kids thinking “Conservative parents stupid.”

You’re at the stage of letting go control of your children at this point. But you do control your funds. You don’t need to shell out thousands; not one penny, even, to any college that wants stupefy your kids they way they did to Adam Something. You’re a conservative. You don’t need to be stupid.