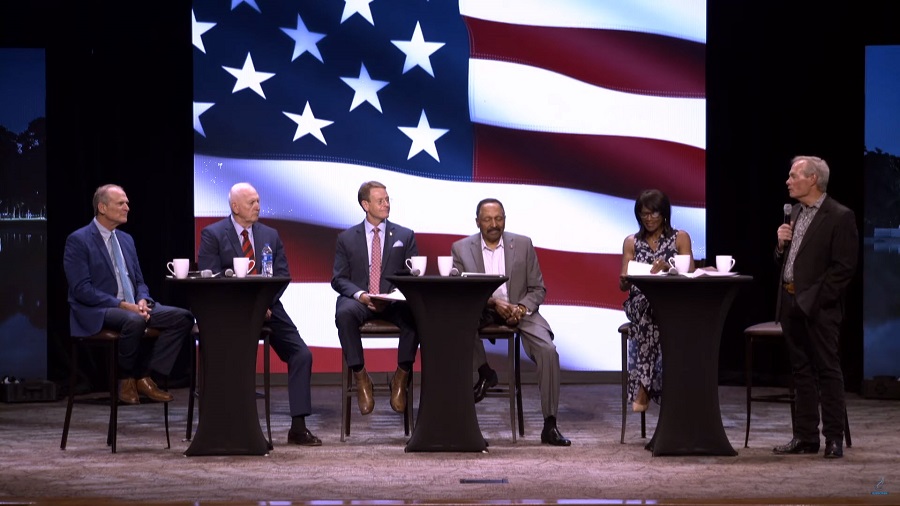 Despite taking every single COVID-related precaution recommended by local officials, Andrew Wommack Ministries received a cease and desist order from the office of Colorado’s Attorney General … right in the middle of their annual, week-long Summer Family Bible Conference. The final day, July 4th, included a musical tribute to America called In God We Trust, featuring “The Star-Spangled Banner” and the Gettysburg Address. The local sheriff’s department provided a color guard.

Prior to the event, Wommack and his executive team met with local public health and law enforcement officials to create a plan that would ensure a safe environment and practices for the staff, guests and community at large. The approved plan included:

The event was held at Charis Bible College in Woodland Park, CO. At the time, Colorado was at Level 2 of its public health orders. According to the state’s own social distancing calculator, the 250,000 sq ft facility should have been able to accommodate up to 1,215 people. But the ministry capped attendance to less than 1,000. The auditorium, where the adults of the event gathered was restricted to 25% of the room’s capacity, with plenty of space left between families.

So why did the AG send the cease and desist order, threatening to shut down the event? Andrew Wommack sat down yesterday with Stream contributor and LIFE Today Live host Randy Robison to explain why. And why he defied the order.

Wommack tells of the arbitrary maximum of 175 people for any gathering recently imposed by Colorado Governor Jared Polis. That number is regardless of compliance to all other orders and facility capacities.

Wommack’s decision to proceed with the event in defiance of the governor’s mandate did not come lightly. “If it was only a First Amendment issue, if that was all we were fighting for,” he said, “I’d be willing to go to the mat, I’d be willing to go to jail.” He said it would have been an easy decision to stand up to the growing threat of a godless state government if it weren’t for the reality of the virus. He wants to ensure that his actions do not cause harm to his staff and community. “I’m concerned about the virus and protecting people, but we took every precaution, more precautions certainly than what they’ve had at these protests. And yet they haven’t restricted them at all.”

“I believe it is not only our constitutional right but our duty to stop this extreme overreach of government that allows people to riot and pillage but not assemble to worship the Lord.” – Andrew Wommack

Protests throughout the state of Colorado have drawn thousands daily. Not only have they have not been limited, they’ve been publicly encouraged by the governor. Wommack feels it is pure discrimination against the church to allow unrestricted and unhindered groups to protest, even as they pose  a threat to public health. Yet Wommack’s ministry was targeted despite their ‘exemplary efforts” to ensure people’s health and safety.

Liberty Counsel is representing Andrew Wommack Ministries against the State of Colorado. They have sent a letter to the AG’s office calling out the discrimination. Liberty Counsel Founder Mat Staver stated, “Religious gatherings have a Constitutional right to exist, and the Colorado attorney general has clearly discriminated against Andrew Wommack Ministries while encouraging mass protests of people that are not taking health precautions. There is neither a pandemic pause button to the Constitution nor an exception for religious gatherings.”

A quick image search shows the vast number of people who have turned out for the protests. Liberty Counsel’s letter includes several to drive the point home.

Toward the end of May, Wommack and more than 700 other ministers in Colorado sent a letter to state officials saying their voluntary compliance with the shutdown was coming to an end. After three months of churches being declared non-essential, it was time to push back. On May 31st, Pentecost Sunday, they returned to holding in-person services at the churches. With precautions and limitations, of course. To date, none of them have received any trouble from the state. Until the Summer Family Bible Conference, that is.

On the evening of July 1st, the night before the AG order was signed, Wommack led a panel discussion for the Truth and Liberty Coalition with William Federer, General Jerry Boykin, Tony Perkins, E. W. Jackson, and Janet Boynes. In this “powerful” session of the conference, they walked through all the key issues at stake in the upcoming election. They analyzed the platforms of both major political parties and discussed biblical stances on each. The discussion was live streamed and so far has had over 20,000 views and high praise in the comments. You can watch the entire discussion here:

The timing of the order and the double standard of the state government raises a question: Is Colorado trying to suppress a virus or the political speech of the faithful?