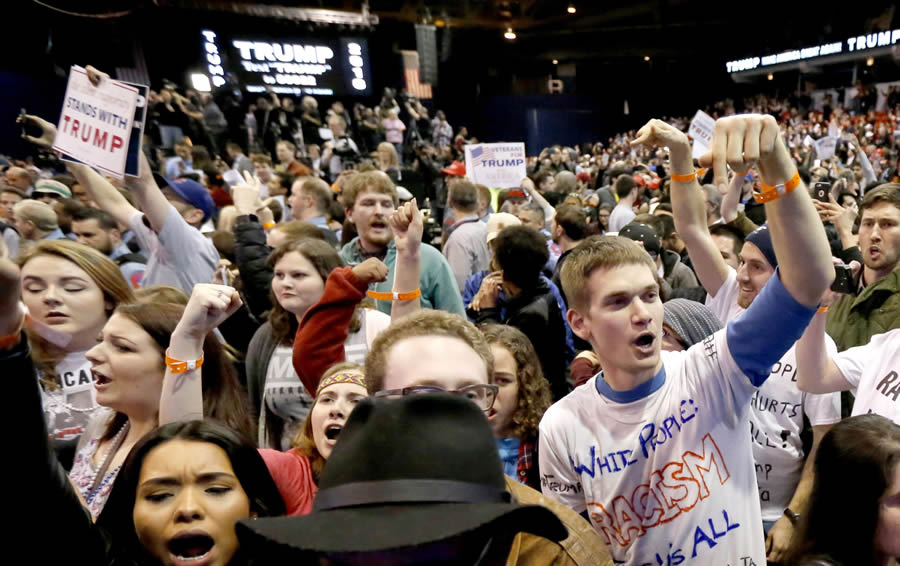 In this Friday, March 11, 2016 file photo, protesters of Republican presidential candidate Donald Trump, right, chant after a rally on the campus of the University of Illinois-Chicago, was canceled due to security concerns in Chicago.

Violence at Donald Trump’s rallies, including a riot in Chicago that injured two police officers, was deliberately instigated by people connected to the Hillary Clinton campaign, those organizers brag on newly released undercover videos from Project Veritas Action. The operators pay and train “agitators,” even some described as “mentally ill,” to disrupt Trump-Pence events.

And Hillary Clinton, suggests one of the key players, knew all about it.

James O’Keefe, founder of Project Veritas and Project Veritas Action, two non-profit organizations dedicated to investigating corruption, dishonesty, waste and fraud in both public and private institutions, is perhaps best known for the investigation which brought down the Association of Community Organizations for Reform Now (ACORN). In his latest undercover video sting operation, O’Keefe uncovers what he calls a “violation of federal campaign coordination laws between Hillary’s campaign, Priorities USA (Hillary’s SuperPAC) and the DNC.”

He also exposes the dirty tricks being employed by the Clinton machine, and introduces us to the players.

The Foval Group and Democracy Partners — Paid to Play Dirty

In O’Keefe’s undercover video, Scott Foval, National Field Director at Americans United for Change (formerly of People for the American Way, funded by George Soros), gleefully gives up information about his company — Foval Group — and the relationship it has with Democracy Partners, a partner in the sordid business of creating problems for Clinton’s opponents. “We have mentally ill people that we pay to do s***, make no mistake,” Foval said. “If you’re there and you’re protesting and you do these actions, you will be attacked at Trump rallies. That’s what we want … the whole point of it is that we know Trump’s people will freak the [expletive] out, his security team will freak out, and his supporters will lose their s***.”

According to O’Keefe, Democracy Partners is a private, political consultant company founded by Bob Creamer that has “deep ties” to Hillary Clinton and Barack Obama’s White House and the DNC.

Aaron Black (aka Aaron Minter), Creamer’s employee at Democracy Partners, directs the “spontaneous” protests at Trump and Pence events. “So, I’m basically deputy rapid response director for the DNC for all things Trump on the ground,” Black said. “Nobody’s really supposed to know about me.” He claims responsibility for a Chicago protest, although he gave ample credit to Bob Creamer.

That protest turned into a riot, forced the cancellation of a Trump rally, and injured two peace officers.

To get to the truth about a case, it helps to follow the money. Foval says he is contracted to Creamer but answers to the head of special events for the DNC and the head of special events and political for the campaign. He explains to the undercover journalist how he gets paid. “The campaign pays DNC, DNC pays Democracy Partners, Democracy Partners pays the Foval Group, the Foval Group goes and executes the s*** on the ground.”

Foval divulged how the three organizations interact. “The campaigns and DNC cannot go near Priorities, but I guaran-d***-tee you that the people who run the SuperPACS all talk to each other and we and a few other people are the hubs of that communication.” Foval can communicate with Bob from the Democracy Partners and AUFC, but only separately. The communication among the Super PACs,  DNC and the Campaign is like “a text conversation that never ends.” Foval said. “It’s kind of like an ongoing Pony Express. It’s not as efficient as it could be but that’s because the law doesn’t allow it to.” Foval admitted that the groups have to avoid the appearance working together so they can deny it ever happened.

Foval trains people to cause problems at Trump’s rallies. “There’s a script. There’s a script of engagement,” he told the undercover journalist. “Sometimes the crazies bite and sometimes the crazies don’t bite.” They get the plants to start confrontations in the line, not in the rally, “because once they’re inside the rally they’re under Secret Service’s control … When they’re outside the rally, the media will cover it no matter where it happens.” He said his group targets those who are mentally ill. “The key is initiating the conflict by having leading conversations with people who are naturally psychotic.”

“We have to really be careful because,” he said, “because what we don’t need is for it to show up on CNN that the DNC paid for X people to [commit these acts.]”

One of the most disturbing examples of his planting people to incite violence involved the 69-year-old woman who was supposedly hit by a Trump supporter in the face — she actually worked for Foval. “She was one of our activists,” he grinned, “who had been trained up to birddog.” Meaning, she was in the line at the front of the rally so when Trump came down the rope she could ask questions. It takes two weeks to train people to birddog, he said. Interestingly, the term “birddogging” came up multiple times in Hillary Clinton’s emails recently released in the Wikileaks scandal, in which Clinton campaign manager Robby Mook referred to birddogging as being a good way to get the Hispanic vote.

Foval doesn’t have any qualms about using those who are down on their luck the hardest, either. “I’ve paid off a few homeless guys to do some crazy stuff, and I’ve also taken them for dinner, and I’ve also made sure they had a hotel and a shower and I put them in a program,” he smiled proudly.

But the best guys to call when he wants something done are the union guys. “When I need to get something done in Arkansas, the first guy I call is the head of the AFL-CIO down there, because he will say “What do you need?” And I will say, “I need a guy who will do this, this and this. And they find that guy. And that guy will be like, yeah h***, let’s do it.”

Other deeply involved activists brag about protests they helped incite, like one in Arizona where they shut the highway down and the one in Chicago where police officers were injured.

What Does Hillary Know?

So what did Hillary Clinton know and when did she know it? According to Creamer, the dirty business goes straight to the top. When asked if Hillary was aware of Democracy Partners’ work of sabotaging Trump’s rallies, Creamer responded, “The campaign is fully in it … Hillary knows through the chain of command what’s going on.”

UPDATE: The Video Fallout: From Bird-dogs to Scapegoats

See the below video regarding the injured officer from the Chicago riot following the Trump rally cancellation due to violent protests.