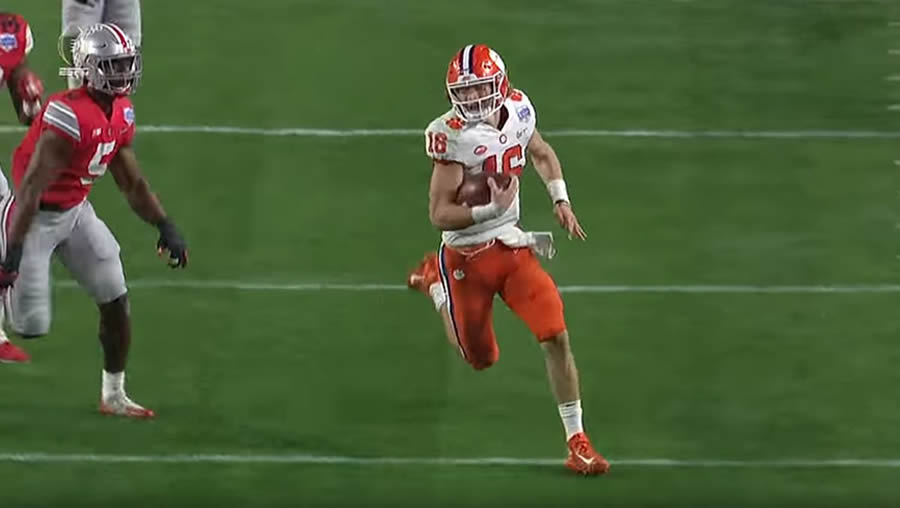 The Clemson Tigers are headed to the national championship game again after beating Ohio State 29-23 in Saturday night’s PlayStation Fiesta Bowl. Clemson quarterback, Trevor Lawrence, had a lot to do with the win — but he won’t say that. The humble sophomore from Cartersville, Georgia, says credit doesn’t go to him or his Clemson teammates.

‘God Can Do Immeasurably More’

Lawrence told ESPN that while his team “didn’t play great, didn’t look pretty,” they managed to get the win. “I wouldn’t want to do this with anyone else. I have Ephesians 3:20, and it says, ‘God can do immeasurably more than any of us can because of Him within us.’ And that’s just so true. I mean, all of us, me, what we did tonight just, it ain’t us. It’s about this program and who we are.”

Since joining the Tigers in 2018, Lawrence has led his team to victory in every game — 29 straight wins. Saturday’s win didn’t come easy. In fact, Ohio State was up 16-0. Lawrence then ran a 67-yard touchdown and by halftime, the score was 16-14.

In the fourth quarter Clemson began a drive from their own six yard line. And did not stop. Then with 1:49 to play, Lawrence threw a 34-yard touchdown pass to Travis Etienne.

A championship drive from the defending champs.

Lawrence threw for 259 yards and two touchdowns with no interceptions. He also rushed for 107 yards and another touchdown. “I don’t think anyone has abilities for no reason,” he said earlier this year. “I don’t think anything is coincidence. God gave me these things for a reason, not just talent on the field, but other opportunities to be a light to people.”

Clemson will face No. 1 LSU in New Orleans January 13 for the College Football Playoff National Championship.