The Churchill Option and The Colson Way 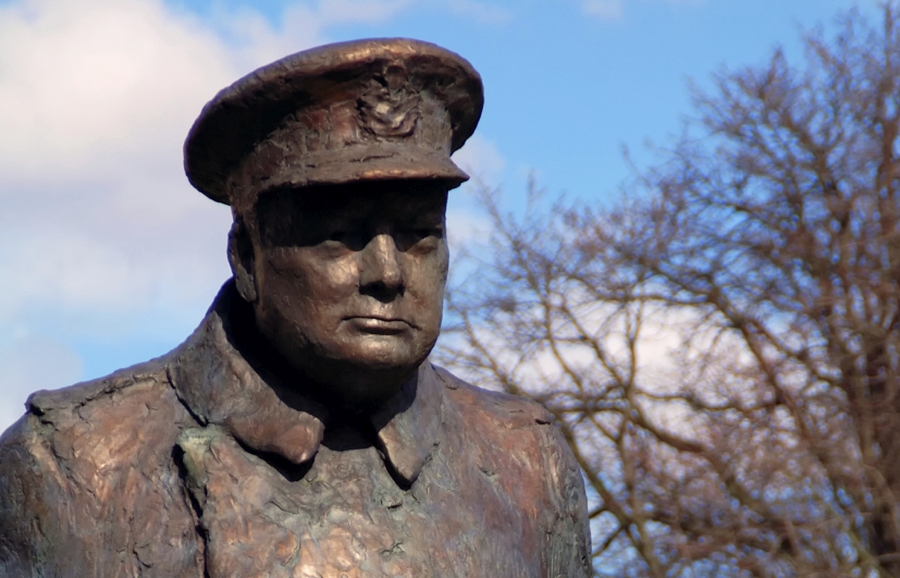 A statue of British Prime Minister Winston Churchill outside the Grand Palais in Paris.

It may be the greatest speech in political history. Winston Churchill delivered what is commonly called “We Shall Fight on the Beaches” on June 4, 1940. To the modern ear who hears the audio, Britain’s Prime Minister sounds downright laconic for much of the speech, including the classic peroration, where his rhetoric reaches Olympian heights:

Churchill’s calm tone concealed thunder. His words galvanized a country staggered by the imminent Nazi takeover of France, just one hundred years earlier the world’s greatest military power. Churchill made clear that Britain would make no truce with Germany. She might lose to her fearsome foe, but she would never surrender, never submit, never kiss the dust of Wehrmacht boots.

The choices, according to Churchill, were plain: victory or death.

Thankfully, America in 2015 is a far cry from Britain in 1940. There is no military battle, there is no tyrant at the door; the Nazis, praise God, are nowhere in sight. However, Christians and conservatives find themselves in a cultural struggle, a contest of visions. They lock horns with a “progressive” vanguard that seeks to undo and recast traditional institutions, demanding that the state expand its regulatory reach; the market taste a steel bridle; the rich pay massive taxes; the church get in line with LGBTQIA policy; and the family (and the body) be redefined to take on whatever form one desires.

The rapid advance of this progressive program threatens to subdue its opponents into inaction and quietude. One thinks of the permanent scowl affixed to the face of the fictional libertarian Ron Swanson in the NBC show Parks and Recreation. Swanson perpetually feels annoyance at the attempts of his peers to remake the world around him. He wants things to remain as they are, and he opts not to fight this sleepless progress, but to retreat from it to his beloved cabin in the woods.

I suspect that many people today resonate with this. Conservatives and Christians, after all, enjoy life. They are not perfect, and this world is fallen, but on average they genuinely like their families, friends, churches, coworkers and communities. They do not wish to tear down the existing order. They see weaknesses in it, but they also see much that is worth preserving. They recognize that progress must first reckon with wisdom before it can proceed, and that before dynamiting the old building because a few cracks have appeared, it makes sense to see if it can be fixed instead.

This group — a silent majority, I suspect — feels elbowed out of the public square. They are not as angry, as eager to disrupt the social fabric, as ambitious to organize and agitate as their progressive contemporaries. But like a farmer who smells rain in the air when the sun’s still shining, they recognize that they will soon be caught in the storm.

Conservatives and Christians need to learn from two tutors: Churchill and Chuck Colson. Allow me to explain why these two men qualify for public square pedagogy.

Churchill inspired his country to withstand the onslaught of the German air force in the months that followed his famous “On the Beaches” speech. His will stoked England’s will, and England stood down Germany. The Reich struck at Britain with full force, but Britain absorbed its worst, and dished it back.

Fast forward a half-century. Chuck Colson was once deeply involved in politics, a proud staffer in the Nixon White House. But after serving time for the Watergate scandal and finding Christ in prison, he went on to lead a prison-reform ministry called Prison Fellowship. Colson took the gospel of Jesus Christ into one prison after another. And on his radio show, BreakPoint, he made the case for the Christian worldview. Colson insisted that Christians oppose lies and falsehood and bad policy not because they wish to crush their detractors, but because they wish to love their neighbors in fulfillment of the second greatest commandment (Matthew 22:37).

Christians and conservatives need these two instincts. Like Churchill, they must stand their ground against an opponent who would destroy what they hold dear. They must not retreat into the forest, heading for the hills. And like Colson, they must also communicate that they stand their ground out of love. They are, as Colson’s friend Richard John Neuhaus once said, “against the world for the world.” Contra mundum pro mundo.

Love to the End

It is love, not anger, that will sustain us to the bitter end. Love for Britain, and all it stood for, compelled Churchill to take his stand. Love for the lost, and all who suffered with them, called Colson to begin his ministry. Love is not weak. In the biblical mind, it is the strongest force in the cosmos (Heb. 12:2). Love drove Christ to earth, to a human body and to the cross. There, love overcame the final foe, death, and condemned the enemy of humanity, the devil.

Love is not weak. It is so strong that it drives ordinary people to never stop fighting for life, liberty and happiness, to never surrender, to never quit, whatever the cost may be.