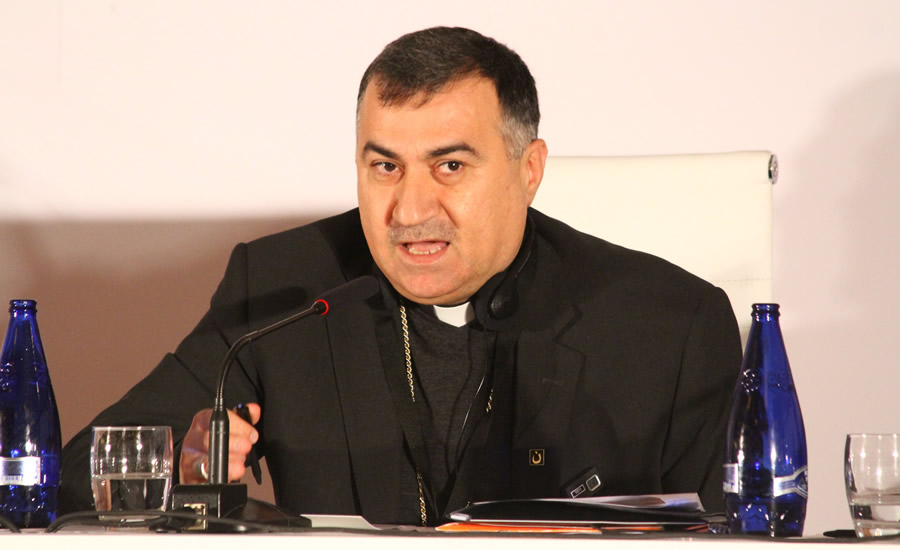 Archbishop Bashar Warda is a man of hope, humility, courage and defiance. Christians will stay in the Middle East, like it or not, he says — even if there is little or no room for them among Muslim leaders in the region.

“Chilling” doesn’t begin to describe listening to Warda talking about the threat to his people in that troubled part of the world. Speaking virtually from Erbil, Iraq, he delivered his message to the fifth annual New York-based conference on international religious liberty sponsored by the Anglosphere Society, among others, titled “Act in Time: Protecting Imperiled Christians in Ancient and Other Lands.”

In the years since the Islamic state forced his flock into exile in Kurdistan, Warda has labored to minister, to give families healing and confidence that there is a future for them in their homeland. But the fact of the matter is that there won’t be if more of the world doesn’t pay attention. There were over 1 million Christians in Iraq before our war there began in 2003, and there are now fewer than 150,000.

“The sand has nearly run out in the hourglass that is Christianity in Iraq,” is how Stephen M. Rasche, vice chancellor of the Catholic University in Erbil, describes the situation in his book The Disappearing People: The Tragic Fate of Christians in the Middle East. “And although there is still time left, if we don’t act now, the 2,000-year presence of Christians in the Middle East will come to an end on our watch. But if any responsible, effective plan of action is to occur, it will need to be based in new thinking, which admits the reality of the situation, unclouded by Western aspirational paradigms and the knee-jerk tendency to resort to claims of phobias and bias, which serve only to obscure the truth.”

Rasche is an American, who, with my late friend Andrew Walther, established the Institute for Ancient and Threatened Christianity. In the last days of Walther’s life — he died shortly before his 46th birthday of leukemia — he was on the phone with Rasche, working on edits to some witness testimony about the precarious life of a Christian in Nigeria. As one of the speakers at the conference put it, 11 Nigerians were beheaded last year on Christmas Day — did we notice? Do we care? Do we do anything about it?

A Friend to the Persecuted

Walther and Rasche were supposed to go to Nigeria this spring, but the coronavirus pandemic did that trip in.

Walther was an incredible friend to the persecuted, helping with everything from basic needs to working to save villages and doing diplomatic work. We must let his example inspire us to carry on his work.

The most shocking and yet unsurprising thing that Archbishop Warda said at the conference, which was dedicated to Walther, was to share with us his fear as he watches the growing hostility to religion in the United States. He knows how that story ends. He’s living it. These things are the calling card of tyranny, he said. We must learn from him and be lovingly defiant in the face of it.

There’s an urgency to this problem and it’s one we have to find a solution to — as a nation, for all who value freedom. As Cardinal Timothy Michael Dolan of New York put it in his rallying keynote at the conference, the Middle Eastern Christians’ suffering must be our suffering.

Dolan, who is the new head of the U.S. Catholic bishops’ committee on religious liberty, brought with him an icon of the Egyptian Coptic Christian martyrs who were beheaded by ISIS in Libya in 2015. He remembered in particular the one martyr who wasn’t Christian, who said he wanted to be the faith that the other men were. Dolan said he does, too. We must live up to the ideals of our religion and work to improve the world. Do something for persecuted people before 2020 ends. And give thanks for our blessings, even in the midst of struggle.