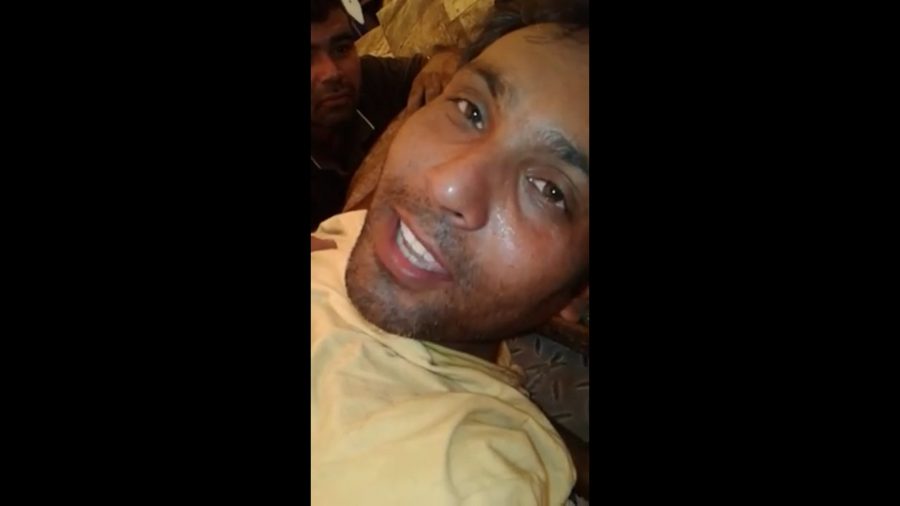 This video grab from YouTube shows Christian Pakistani Haroon Maqbool escaping from a U.N. detention camp on the Island of Lesbos to the Greek Mainland by hiding under the canopy of a cargo ship for 16 hours. The British Pakistani Christian Association is raising awareness of the plight of many Christian refugees who suffer persecution in refugee camps.

Christian refugees have been blocked from seeking asylum on the Greek mainland after fleeing Islamic persecution in the camps in the Greek Isles.

Muslim persecution of Christians from Syria, Afghanistan, and other Muslim countries has run rampant in the Moria refugee camp on the Isle of Lesbos, according to the British Pakistani Christian Association (BPCA). Christians in the camp have received death threats, been barred from openly practicing their faith, and in some cases have been beaten and had their makeshift homes destroyed at the hands of Islamic radicals. Many Christians have fled for their lives to seek asylum on the mainland, but current Greek policy turned them back to the camp, according to Wilson Chowdhry, president of BPCA.

“I would like to bring to your attention several reports of persecution that have been raised with the British Pakistani Christian Association, relating to persecution of Christians within the Muslim-majority … Moria Camp,” Chowdry wrote in an email to Dimitris Caramitsos, Greek ambassador to the U.K. “Christians are being prevented from holding church services, worshiping and praying by their Muslim neighbors. Moreover, reports of tents being burned down, violence, bullying, harassment and severe threats paint a very bleak picture of the quality of life for Christians caught up within the camp.”

Chowdry sent the email to seek Caramitsos’ help in changing Greece’s policy concerning asylum for refugees, which sent many Christians back to the same camps where they have been persecuted, according to Christian Post.

“The majority of Christian refugees escape but are being refused asylum by Greek authorities who only consider adverse health as a mitigating factor and not Christian persecution,” Chowdry’s email reads. “We are seeking your help in obtaining a change in the current Greek policy in which the risk of proven re-persecution of Christians counts as a mitigating factor for asylum assessment for escapees of Moria Camp.”

Many Christians who fled Lesbos but were denied asylum on the mainland became illegal immigrants, as they could only receive state assistance and legally apply for asylum if they returned to their refugee camp. Christians like Haroon Maqbool of Pakistan, who arrived in Lesbos in 2016 with two children, chose not to face the dangers of the persecution they had already escaped, according to BPCA.

Maqbool attempted to register for asylum at the camp in Lesbos but was pushed to the back of the line with other Christian men by Muslims who said they would kill him and the others if they entered the camp. Maqbool chose to flee by boat to the mainland instead of risking his life and has lived illegally in Greece for nine months.

BPCA told Christian Post that Maqbool’s situation is not unique among Christians who came to Lesbos.

“Many just choose to be homeless rather than return back and stay at those camps,” Chowdhry said. “Those camps are extremely terrifying.”