Responding to firsthand testimonies from victims of persecution, Speaker Pelosi agreed the U.S. must take strong action against the Chinese Communist government. 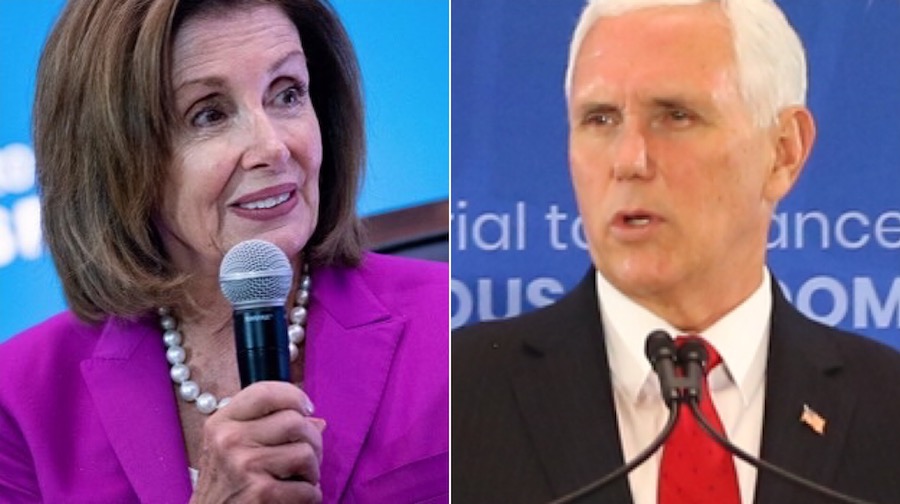 Speaker Nancy Pelosi (left) and Vice President Mike Pence spoke out against human rights abuses in China at the Ministerial to Advance Religious Freedom. It was held on July 16-18, 2019 at the U.S. State Department.

At the keynote session of the Ministerial to Advance Religious Freedom, diplomats from 106 countries expected fireworks. Speaker Nancy Pelosi, D.-Calif., would speak alongside conservative leaders on human rights issues — a rare moment of true bipartisanship.

Then onto the world stage walked a 25-year-old Chinese woman. She had a personal connection to the world’s most powerful oppressor of religious minorities.

“My father, Ilham Tohti, is in a Chinese prison serving a life sentence,” said Jewher Ilham. “His only crime was to use his words and his pen to tell people what is happening [to] Uyghurs in China.”

Currently, an estimated one to three million Uyghurs are imprisoned in reeducation camps in western China. Reporters from BBC News recently went inside one such facility.

“He chose to speak out about what he believes are basic, essential human rights,” added Ilham. “The Chinese are threatened by religious freedom because free, faithful people are a threat to them.”

“What’s happening in China is a challenge to the conscience of the world,” said Speaker Pelosi. “We cannot let it go. The violations are of such scale and are so big. … If we don’t speak out against what’s happening there, we have no moral authority to speak elsewhere.”

“How often do Speaker Pelosi and President Trump have anything in common?” observed Bob Fu, president of China Aid, in an interview. “Her standing in his State Department spoke volumes. We saw an unprecedented bipartisan consensus.”

Chinese government officials were not invited to the Ministerial. Perhaps they still heard the message delivered repeatedly by world leaders.

“More than a million Chinese Muslims… endure around-the-clock brainwashing [in] internment camps,” said Vice President Mike Pence. “Survivors of the camps have described their experiences as a deliberate attempt by Beijing to strangle Uyghur culture and stamp out the Muslim faith.”

They include Ilham Tohti, who has been imprisoned since 2013. Formerly an economics professor in Beijing, his condition and location are unknown. “Freedom of religion and thought is supposed to be legal in China, according to Chinese law,” said his daughter Jewher Ilham. “So the Chinese government is using ‘extremism’ as an excuse to make their actions justified. The real crime is the camps themselves.”

For decades, Bob Fu has tracked human rights abuses in China. Recently, he has called out their destruction of churches and use of surveillance to control minority groups.

“The Chinese regime has lost all credibility,” said Fu. “How can you blindly deny when there is evidence? The U.N. should launch a commission of inquiry, as they have done in North Korea and Burma. This is not a small-scale incident.”

Beyond millions in reeducation camps, repression of minorities goes deeper in the world’s most populous nation. An extensive new report confirms that China continues to kill innocent people and sell their organs.

“The government is tearing families apart and putting so many innocent people into camps,” said Ilham. “They harvest prisoners’ organs for sale on the organ market. The stories are absolutely terrible.”

The independent China Tribunal compiled evidence from over 50 witnesses. Report data estimates 60,000 to 90,000 organs have been forcibly extracted annually from victims in China over the past decade.

Most victims are practitioners of Falun Gong, a sect of Buddhism devoted to compassion and forbearance. Sean Lin, director of communications for the Falun Dafa Association of Washington, D.C., participated in the Ministerial. His group screened a documentary chronicling these abuses.

“In the whole world, only the Chinese Communist Party persecutes the Falun Gong,” said Lin.  “These teachings are widespread, translated into more than 40 languages. Yet China continues this crackdown and persecution.” He notes the complicity of Americans in this practice. Thousands travel to China every year to receive organs. Additionally, U.S. medical schools are directly involved.

“American institutions have provided training to Chinese surgeons, like the University of Pittsburgh,” said Lin. “In the U.S., they say they will follow medical ethics but when they go back to China they are involved in organ harvesting.”

“The company claims it was merely a commercial transaction,” said Fu. “But in Nazi Germany, do you sell gas chamber technology to the Nazis? And then say, Oh, they have the biggest need for our product. This is the test of your conscience.”

According to Lin, a Mideast nation provides an example for how the U.S. should respond.

“It’s a very effective step for the government to stop this trend.”

What Can Be Done

The Ministerial served to encourage human rights advocates and inform the world of their cause. Now they are seeking real action.

Fu and other advocates echoed a concrete action recommended by Pelosi. She urged the U.S. government to freeze the assets of nefarious Chinese official Chen Quanguo. He is known as the architect of Uyghur internment camps in China.

“[He] is in Xinjiang implementing this internment of the Uyghurs there,” said Pelosi. “From what we saw in Tibet and certainly what we see with the Uyghurs, we should be implementing a Global Magnitsky Human Rights accountability on Chen Quanguo!”

Trump as “the Decider”

Whether taking this step, or urging passage of the Uyghur Human Rights Policy Act, Fu said he sees President Trump as “the decider.”

“President Trump should feel he is empowered with a mandate to do this,” said Fu. “I’m holding my breath and watching his tweets. It would be very surprising and very disappointing if he doesn’t do so.”

“The Communist Party has no discrimination in terms of persecution of religious groups,” said the Falun Gong advocate. “They can label various groups as evil, but they are the biggest evil cult.”

Learn more about organ harvesting in China in the video below. Explore The Stream’s complete international coverage, and sign up to receive top stories every week.