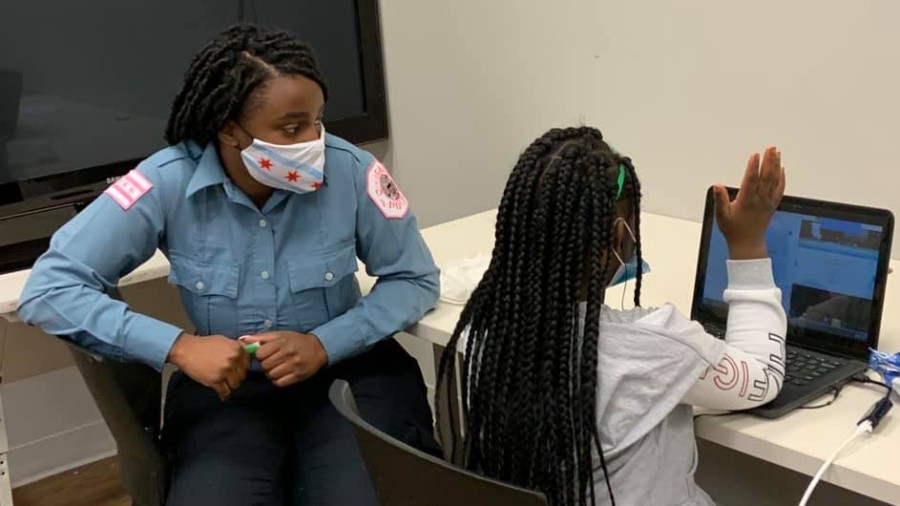 Around the country this summer, youth in many urban areas have clashed with law enforcement over police brutality issues. But in one Chicago neighborhood, young people actually crossed protest lines during peaceful demonstrations and greeted officers.

“Kids would run up to the squad car,” recalls Chicago Police Department (CPD) Deputy Chief Michael Barz. “They’d say, ‘Hey, Coach! How are you doing?’ The officer would have knowledge of that child’s life and situation, and ask about their family. Our presence is shown to be a positive influence beyond responding to a crime or 911 call.” 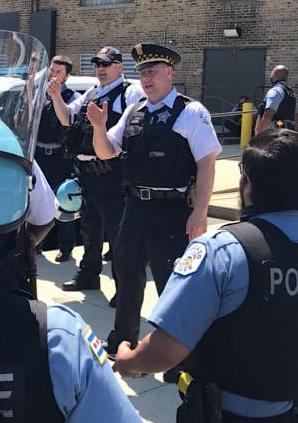 This remarkable response is due to a ministry that has forged relationships between local officers and youth — first in sports leagues, and now through a remote learning initiative.

The ministry, City of Refuge Chicago, began in 2018 when Stephanie Marquardt, a volunteer who lives in the Chicago suburbs, and her husband, Kurt, shared their vision with pastors at an inner city church: Chicago West Bible Church.

Located on Chicago’s West Side, this multi-ethnic, evangelical church sits in one of Chicago’s neighborhoods long defined by challenges of high crime rates and poverty. Now locals have reason for hope.

“How God works isn’t rocket science,” Stephanie Marquardt told The Roys Report. “He says we’re supposed to do life together. Through sports, we created a space where civic, secular, and sacred partners got to know one another, and these precious kids.”

Coming Together in the Crisis

In a season when COVID-19 restrictions halted many activities, a summer baseball league organized in Chicago’s 11th and 15th Districts gave local families a respite.

More than 600 kids from these West Side neighborhoods participated in or watched games this summer, all masked up and careful to follow COVID safety protocols.

Uniquely, CPD officers served as coaches for 15 teams in the league organized by City of Refuge Chicago. Several area churches offered their baseball fields for games and practices.

“Dozens of officers participated in this league,” CPD Deputy Chief Barz told me. “Those who weren’t coaching came in and helped with the kids’ practices. Baseball teaches more than just the game — it models socialization, discipline, and other life skills.”

Marquardt, executive director of City of Refuge Chicago, made countless contacts and filed the necessary paperwork to organize the league, now in its second year.

The non-profit group’s website says it “exists to bring light, hope, and transformation to individuals and families.” Built on relationships formed to serve vulnerable children, City of Refuge’s mission materialized in a new way this fall through an unexpected outreach.

With only one week until classes were set to begin, many parents and civic leaders worried how this COVID-related safety policy would impact at-risk families. Looking past the politics, Marquardt viewed it as an opportunity.

“People made decisions, and now these children we know need help,” she recalled thinking. “For a good third of them, home is not going to be a great place for them to learn for a variety of reasons.”

Within weeks, City of Refuge was able to open a remote learning center that paired officers with neighborhood kids for tutoring.

Marquardt was able to launch the learning center with the help of Pastor Jamie Thompson who ministers at Reborn Community Church, a multicultural church in Garfield Park in the 11th District. With space and an internet connection available, their pastoral team had already discussed opening a remote learning center at the church. Their main issue was finding enough people to staff it.

“That’s really interesting,” Marquardt recalled thinking. “Because I know some officers and nonprofit volunteers who would love to help make this happen.”

Soon she had another conversation, this time with her liaison at the CPD’s Community Safety Team — a unit formed this summer in response to the protests. The liaison then spoke with Deputy Chief Barz, who heads the unit and was open to working together.

“We can’t do what we do without active community members,” Barz told me. “Stephanie and others connected us with local groups. They bring their credibility and say, ‘Hey, the police want to get involved.’ They trusted us to help.”

Two days per week, local kids walk down the block to Reborn Community Church where officers spend 7 to 8 hours helping them and answering questions on math, reading, and writing.

Each day begins with temperature checks, one of several COVID-19 safety protocols including face coverings used by all present.

Officer Karina Hernandez Rea heads up the Garfield Park remote learning site. “We have separate tables for students that are more than six feet apart from each other,” she told me. “Thankfully, it’s quite a large space provided by the church.”

What about potential criticisms regarding “separation of church and state”? 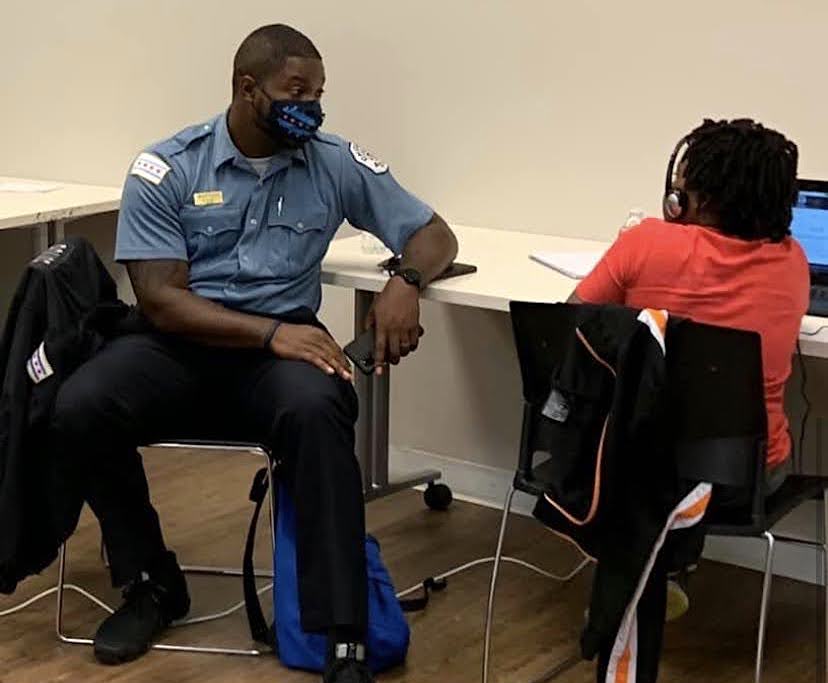 Barz responded frankly: “The church is simply providing the structure for learning. There is no religious education being done. You’d be hard-pressed to find a skeptic of providing a safe space and learning environment for children. I think it’s been a great way for the church to reach out and provide practical help to the community.”

Having helped organize the sports leagues and this remote learning project, Marquardt says those involved — non-profits, churches, and law enforcement — have had to “learn each other’s language” as they collaborate.

Faith is evident in all parts of the equation. “Some of the officers pray, and some don’t,” she said. “It’s just everybody respecting one another. Honestly, a good witness many times is not spoken, but lived.”

Two other remote learning sites have now been set up in Chicago’s West Side neighborhoods, using the same model and helping dozens of students.

Officer Hernandez confirms that student educational outcomes are improving as a result. “A lot of the students were struggling with focusing,” she said. “Having a tutor next to them and making sure that they’re being kept on task helps them out a lot.”

Building on the successful baseball initiative, City of Refuge Chicago now has hundreds of kids signed up for their winter basketball league. Training and practices are already underway via virtual sessions.

Many CPD officers who volunteered as baseball coaches plan to hit the basketball court too. Games are expected to start in early 2021, pending the current COVID situation in a given area.

“Through no fault of their own, these children found themselves in a spot where they need help,” she said. “And, bam, God has provided opportunities for them right in Garfield Park.”

Originally published at The Roys Report. Reprinted with permission.