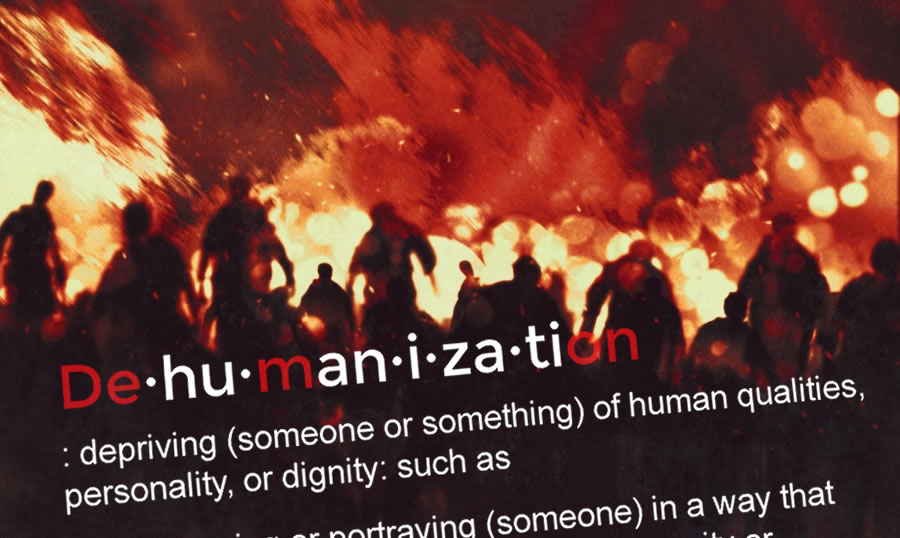 We are out of our minds.

In the wake of earlier mass murders, the Dayton shooter had often griped about the need for more gun control laws. Then early Sunday morning, he put on body armor, picked up his own weapon and unloaded round upon round into the bodies of innocent people. He killed nine, including his very own sister. He wanted more gun control laws then ignored the most basic law, “Thou shall not kill.”

On Sunday, the media and political class treated the El Paso shooter’s “manifesto” as if it was typed on White House stationary. Yet it was loaded with progressive talking points that may as well have come out of the mouth of AOC. (The Dayton shooter’s words, including “I do not consider ICE agents to be human beings,” were definitely from AOC’s songbook. And his vote would have gone to Elizabeth Warren.) As far back as the Garden, half truths serve only one master.

Why did the El Paso killer write a manifesto? A brilliant thread from Brian Cates, a columnist for The Epoch Times, puts it down to nihilism. The shooter knew the media and politicians would jump and dissect his words. Murder isn’t enough, Cates argues. He found his jollies jerking everyone around.

Even if the El Paso murderer really believed what he was selling, we still end up upside down. His action came right as Antifa is plugging a “resistance” event that plans to lay siege to El Paso in September. (Texas’ Lt. Gov. is warning Antifa to stay away.) Antifa and friends could not have dreamed of an act more perfect to serve the interests of those clamoring for open borders and insisting whites are by definition racists.

Other Stream Responses to the El Paso and Dayton Shootings

The Stream‘s Tom Gilson is in Dayton. He wept at last night’s vigil. He’s not in the mood for political talk. “We need Jesus,” he writes. “God help us all.”

Similarly, Stream contributor Liberty McArtor looks at the weekend’s events through the prism of Psalm 140: “Deliver me, O LORD, from evil men; preserve me from violent men, who plan evil things in their heart and stir up wars continually.”

Mike Huckabee notes that as eyes focused on El Paso and Dayton, 49 people were shot in Chicago. He asks us to look at the toxicity of our culture.

Shooting up a Wal-Mart in El Paso isn’t self-defense against an “invasion.” It’s a Soviet-style propaganda victory for the Left. Good luck talking about securing the border without being dubbed a white supremacist who has the blood of El Paso on your hands.

If this punk’s unrepentant soul is ever sent to hell, the Left will FedEx him bottles of ice water as a measure of thanks.

Naturally, all of this is Donald Trump’s fault. Of course. Despite the El Paso shooter’s specific statement to the contrary and the Dayton shooter being enough of an anti-Trump militant he could have landed a gig on CNN.

The mania is so disconnected from reality. Soon we’ll read that a Trump limo chauffeured the Columbine kids to school. That the true translation of “Allahu Akbar” said by the Pulse nightclub shooter is “Make America Great Again.” That the Jonestown Kool Aid was made with Trump Water.

But this is what the deliberate and wicked distorting of Trump’s Charlottesville comments has wrought and three years of calculated, cynical message manipulation has bought. (Doubt me? Watch the actual Charlottesville comments. Go watch Don Lemon at last week’s CNN debates. And listen to most of the Democratic candidates today.)

Alexandria Ocasio-Cortez leads the charge in blaming Trump. Yet when an Antifa member tried blowing up ICE agents a few weeks back, we heard nothing. Her screed about white nationalists and fascism came as her chief of staff announced his resignation. Saikat Chakrabarti’s political idol was literally a Nazi collaborator who dreamed of turning India into a Fascist-Marxist enclave.

Maxine Waters is also blaming this weekend’s mass murders on Donald Trump. The woman who pumped gasoline in the air and lit the match on the L.A. Riots. Dozens died in Mad Maxine’s inferno.

Bernie Sanders? Yes, he, too, says the deaths are Trump’s doing. The same Bernie Sanders whose supporter nearly assassinated a squad of GOP congressmen, stoked by anti-Republican rhetoric. Who has time for words of wisdom and comfort when the bloom is beginning to fade on your campaign? (Meanwhile, a quick prayer of healing to Rand Paul. First targeted by the would-be assassin, then viciously beaten by his politically-motivated neighbor. Sen. Paul is having part of his lung removed as a result of his wounds.)

Then there’s Beto O’Rourke. It’s his hometown that’s hurting. And he is hurting. And his response is to blame Donald Trump. Specifically. Yet, how do you ignore the shooter’s very explicit statement that his views predate Trump’s entrance into politics? Easy. Because it is convenient. A cheap hit. It’s what you do when your polling is so low you need to stand on the bodies of your fallen townspeople to gain traction.

Do better, people. Dang it. You’re supposed to be leaders.

Prayer and the Children of God

And that includes those mocking or dismissing the power of prayer in times of anguish. Again, we find ourselves upside down and out of our minds. If God does not exist, if He is not active in healing, if our hearts are not bent towards His definitive justice, why do you even care if somebody killed 22 people? Or 200 people. It’s stepping on an ant hill. Putting out rat poison.

But we are, indeed, far more than ants or rats — as even those besmirching prayer and crying “do something” must concede if their concerns have any meaning. We are humans.

Which gets us to the entire ball of wax.

Both the El Paso shooter and Dayton shooter wore ear protection during their rampage. Why? To drown out the screams? To make it easier to play out a video game against cut-out targets, to block out that those being massacred are real, living, flesh-and-blood human beings?

Your common denominator — be it Gilroy or El Paso or Dayton or the blood-flooded streets of Chicago — is the dehumanization of fellow human beings. The disconnect. The deletion of the default emotion of empathy.

You can, as Democratic candidate Tim Ryan suggests, drag every single member of Congress back from their vacations, work 24/7 from here to election day, load up the U.S. code with enough gun control laws to bury the Second Amendment under a mile of paper, and you still are not going to eliminate mass killings. Heck, Timothy McVeigh used fertilizer and a rental.

No, nothing stops. Not unless and until you address the fundamental question: What is it that allows someone to pull the trigger (or plunge the knife) and kill a fellow human being? How did it come to pass that you feel as if your grievance, your issue, your hurt, your anger, your amusement, your convenience, your revenge, your reputation, your ego, your honor, your search for relevance, your lust for fame, your politics, your pleasure is worth more than the life of another?”

You don’t have to openly “hail Satan” like the Daytona shooter. But when you put yourself first, you are following Satan’s lead. When you dehumanize the other, he nods with enthusiasm.

This human being in your gun sight is no precious child of God. This person in your path has no intrinsic value. Certainly not enough to stand in the way of your objective, your feelings. You are all that matters. Whether your target’s at a bar or at a festival, at a church or at synagogue, at Walmart or in the womb. Shout your murder.

Epilogue: No, we ain’t gonna give Satan the last word. More to come …