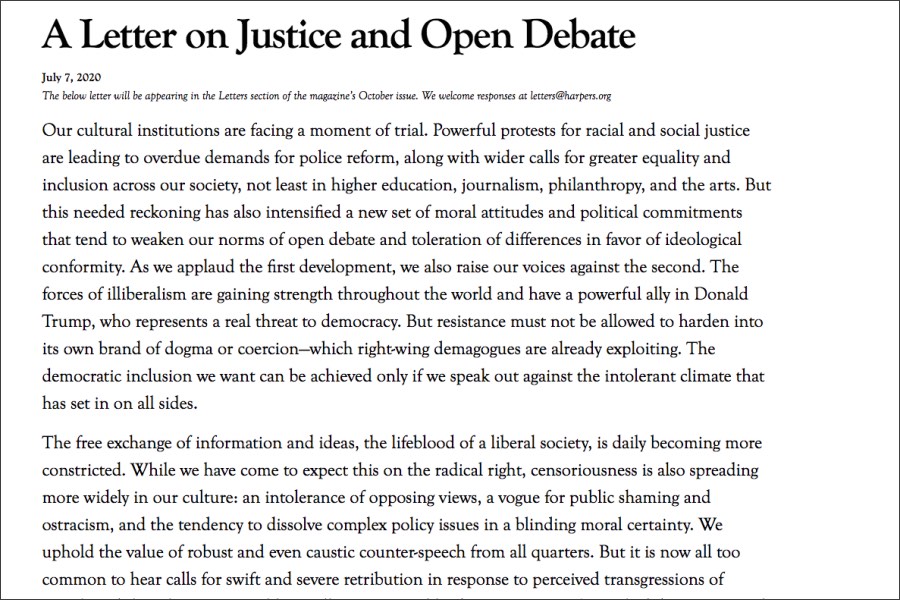 It’s weirdly old-fashioned. Almost out of the fifties. A distinguished collection of major American intellectuals speak up for free speech. Mostly liberal intellectuals, too, and some of the biggest around.

Back in the fifties, liberal intellectuals made their mark by defending free speech when much of America didn’t like it. They spoke out against McCarthyism and other attempts to restrict political speech. They spoke up for artistic freedom. The rest of America eventually came around.

Liberals insisted that America should permit even offensive speech in order to protect everyone’s speech. As the American Civil Liberties Union puts it, we don’t need a First Amendment to protect popular ideas. “History teaches that the first target of government repression is never the last. If we do not come to the defense of the free speech rights of the most unpopular among us, even if their views are antithetical to the very freedom the First Amendment stands for, then no one’s liberty will be secure.”

But that was then. This is now, with much of the left committed to my-way-or-the-highway cancel culture. Those who disagree with progressive orthodoxy aren’t just wrong, they’re wicked and must be silenced. And if possible publicly humiliated and unemployed.

Until now, their peers on the left haven’t made a peep.

They just peeped, in the liberal magazine Harper’s. In a statement titled “A Letter on Justice and Open Debate,” about 130 of the biggest figures in the liberal and progressive world speak out for free speech. Noam Chomsky, dean of America’s radical critics. Handmaid’s Tale author Margaret Atwood. Feminist icon and hero Gloria Steinem. Gay marriage advocate Jonathan Rauch and several of his Atlantic colleagues. Malcolm Gladwell and a lot of his fellow New Yorker writers. Vox’s Matthew Yglesias.

And what do they say, in a little over 500 words? They speak in general terms and never say who exactly they’re speaking against. They speak against “a new set of moral attitudes and political commitments that tend to weaken our norms of open debate and toleration of differences in favor of ideological conformity.” As liberals, the signers stress the need to think again about racial matters and warn against Donald Trump and “the radical right.”

But their unnamed target is clearly the hysterics of cancel culture. Those people demand people they think have spoken wrongly be punished quickly and severely. The people who run our institutions, trying to save their backsides, do what they ask.

The signers give some general examples. “Editors are fired for running controversial pieces; books are withdrawn for alleged inauthenticity; journalists are barred from writing on certain topics; professors are investigated for quoting works of literature in class; a researcher is fired for circulating a peer-reviewed academic study; and the heads of organizations are ousted for what are sometimes just clumsy mistakes.”

“Literally everyone quietly knows,” he says, that “the dominant majority of progressive people simply don’t believe in the value of free speech anymore.”

The Letter ends stating the classic liberal attitude to public discussion. “We uphold the value of robust and even caustic counter-speech from all quarters. … The restriction of debate, whether by a repressive government or an intolerant society, invariably hurts those who lack power and makes everyone less capable of democratic participation. The way to defeat bad ideas is by exposure, argument, and persuasion, not by trying to silence or wish them away.”

Reason above reaction. Dialogue and debate rather than denunciation. Conversation, not contempt. Freedom, not force. The attempt to convince, not to condemn and compel. Classic liberalism in defense of civilization, in which people thrown together in one nation try to form the best society they can, by talking and thinking together. As the founding fathers did in creating this nation, in one of the most astonishing developments in the world’s political history.

The Cancel Culture Hates It

And the cancel culture left hates it. Hardcore progressivism despises it. They hate the idea that someone else might be right, that others must be listened to. I won’t repeat some of the progressive reaction to “A Letter on Justice and Open Debate.” It’s too boring and tedious and predictable to bother with.

The leftist writer Fredrik deBoer sees this. He believes that “the current political uprising has a chance at being an enormously positive development.” But he’s not pretending it’s classical liberalism.

Writing on his own website, he demands the progressives “end the charade” and admit they reject free speech. “Of course Yelling Woke Twitter hates free speech! Of course social justice liberals would prevent expression they disagree with if they could! How could any honest person observe our political discourse for any length of time and come to any other conclusion?”

“Literally everyone quietly knows,” he says, that “the dominant majority of progressive people simply don’t believe in the value of free speech anymore.”

But at least a lot of leading liberals do, and have finally said so. The woke will look pretty damn silly trying to cancel Noam Chomsky and Gloria Steinem. We can only hope they’ll try.