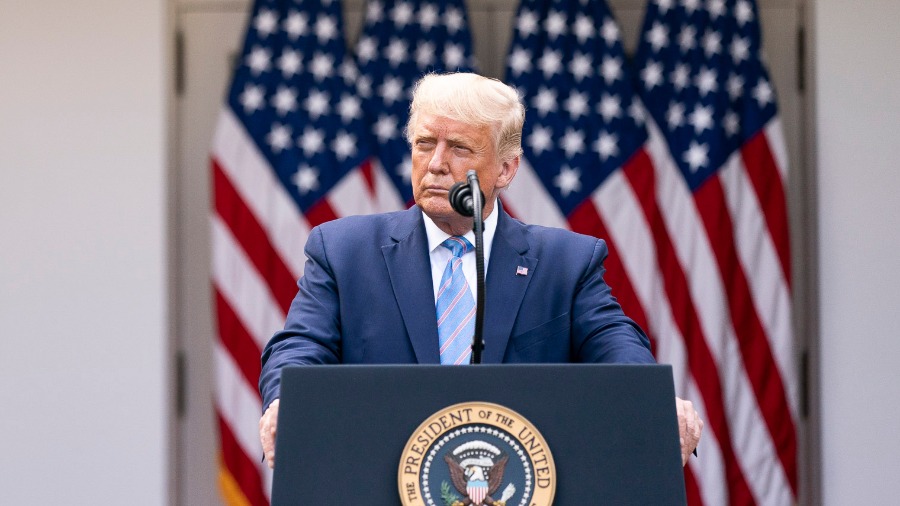 President Donald Trump listens as Vice President Mike Pence addresses his remarks during an update on the nation’s COVID-19 Coronavirus testing strategy on Monday, Sept. 28, 2020, in the Rose Garden of the White House.

Recently, Scientific American endorsed Joe Biden for president. They claimed that Trump is a science denier, as shown by his response to the COVID crisis. As such, they deemed Trump unfit to care for U.S. citizens: “The evidence and the science show that Donald Trump has badly damaged the U.S. and its people — because he rejects evidence and science.”

Nonsense. “Science” doesn’t show anything. Scientists do. And scientists are like the rest of us — biased and contentious. Exhibit A: Scientific American.

We often think of scientists as dispassionate observers — a unique type of person who observes, thinks, and makes claims with a method and technique that others do not. Scientists often demonstrate interesting and useful things, but they are not super-human observers. As Logan Paul Gage says in his new online course How Science Became a Religion, “Scientific theories do not emerge automatically from pristine data … not everyone draws the same conclusions from the same data set.” Their “scientific methodology” is just a way of testing an idea that they have. In other words, at their best, they make and test arguments. And in Scientific American, the unnamed editors make a bad and untested one.

The editors argue that, in contrast to Trump, testing and tracking people is how “Europe and Asia have gained control over their outbreaks, saved lives, and successfully reopened businesses and schools.” But this is not true. The New York Times even recently made note of this. England, for example, spent $20 million on new testing and it didn’t work. They are back in quarantine, disallowed to be in groups larger than six people. Meanwhile, Trump has spent billions of dollars on testing.

And as cases of COVID-19 in some European states increase, the idea that science proves that Joe Biden is a better presidential candidate than Trump is anything but self-evident. Scientific American failed to compare their facts and figures to other countries. They did not evaluate if anyone else had taken the steps Biden proposed. They did not have a control group. Even more than that, they did not look at the alternative evils.

Clearly, the lockdowns have had disastrous social health effects. Depression has seen a staggering increase, domestic abuse has arisen at horrific rates, eating disorders are on the rise, people lack the dignity of work and ownership as small businesses are closing by the thousands.

The editors at Scientific American have made a bad argument — or, at least, an unconvincing one. This is partly because they are sneaking in unproven assumptions. They believe health is achieved through a low number of COVID-19 cases and that families and communities can be sacrificed at the expense of lowering cases. But they never prove these assumptions, let alone state them.

There are a series of questions they would need to answer first before they could really propose such a verdict. Why are cases dangerous if people aren’t dying? How do we define the common good? What is a good political rule? But the editors ignore these questions. Instead they engage in an anti-intellectual power play: science says vote Biden.

In his video course, Gage attributes this power of science to two myths. The first says scientists are neutral. The second says they always or generally agree. Let’s consider both.

The Myth of Neutrality

The magisterial role that scientists have in society is misleading. Stephen Hawking said that “science is increasingly answering questions that used to be the province of religion.” This captures the pride of “scientism.” By scientism I mean the arrogant tendency to reduce all knowledge to the scientific form of knowledge: quantifiable and empirical evidence.

Certainly, the scientist tells us a great deal about nature. But natural scientists, as scientists, cannot tell us what makes a work of art beautiful, what makes an act good or evil, and what constitutes a just political society. They cannot even tell us what defines good public health policies. These are questions that religion and philosophy answer for us.

People often think that what makes science unique is that it is unbiased. Science, they think, doesn’t involve prior commitments, leaps of faith, and presuppositions like other human activities (such as religion or politics). Rather, scientists cultivate a special sort of neutrality that makes them see reality as it really is. But if we study the history of science, it’s clear that all kinds of presuppositions and personal factors influence a scientist’s conclusions.

Scientists are not robots. They form theories and enthusiastically look for evidence to support them.

Einstein once said, “Every true theorist is a kind of tamed metaphysicist, no matter how pure a ‘positivist’ he may fancy himself.” In other words, if a scientist is honest, he is not always following evidence wherever it leads. In fact, the prospect of merely following evidence rarely motivates anyone to work, research or publish at all. Rather, scientists, like everyone else, tend to have a particular view of the world, human society, and man’s place in it that they wish to prove. They seek evidence to prove their theories.

This is a good thing. Scientists aren’t robots. They form theories and enthusiastically look for evidence to support them. How else could they do it? But this means that we should leave behind the idea that scientists are somehow promoting a neutral, disinterested observation and look at scientists, like anyone else, as people with something to prove.

The Myth of Consensus

People often say that science, unlike religion and philosophy, is characterized by consensus, by wide-spread agreement. Scientists do tend to exhibit a greater love of “consensus” than, say, philosophers or theologians. One will often hear that a certain belief represents “the scientific consensus.” One will never hear a belief called the “philosophical consensus.”

But scientists, like all scholars, often jump on bandwagons. Few people are actually contrarians at their core. We like being normal. It’s uncomfortable to stand out.

Take the followers of Antoine Lavoisier for example. Amidst his immense fame for having discovered the Law of Conservation of Matter, Lavoisier came before the Royal Academy of France to prove meteorites were a folktale. He argued that no rocks are in the sky and thus meteorites could not fall from heaven. Instead he surmised that rocks appear to fall from heaven only after lightning has struck the earth flinging many stones into the sky. At the end of his presentation, he added that the peasants had misidentified the origins of these stones and “true physicists” had always been skeptical. And the scientists at the Royal Academy bought it.

Following Lavoisier’s conclusion, most major museums in Germany, Denmark, Switzerland, Italy and Austria tossed out their meteorites. This is why so few European museums have meteorites dated prior to the eighteenth century.

Scientists are just as susceptible as everyone else to falling under the sway of a popular figure and to group-think.

The Power of Science

That wouldn’t be a problem, except that the media and culture treat science as our greatest authority. It claims to represent all public knowledge. Leave private beliefs at the door, for “science” has proclaimed the only perfect vision of reality! This is a charade. The bizarre endorsement of Biden by Scientific American should be seen for what it is: partisan politics, not neutral science.

Much of the structure of my argument was built on the excellent work of Logan Paul Gage in his video course “How Science Became a Religion.” To learn more and watch, go to NewPolity.com/Videos.

Jacob Fareed Imam is a prize scholar at the University of Oxford working on theology and monetary theory. He is the president of New Polity, a Steubenville-based think-tank for the promotion of Catholic Social Teaching.