Three Books That Formed Me: Two Christians and an Atheist 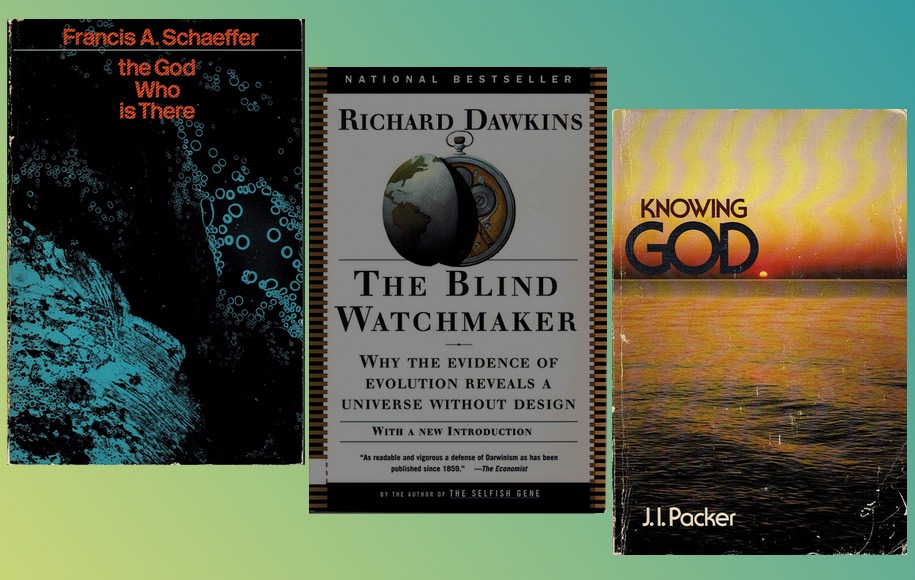 David Mills, fellow senior editor at The Stream, has challenged us all here to write on “books that have formed us.” I still love him anyway. Surely he knows how hard it is to narrow that list down enough to write on it! I’ve chosen three. They represent many more. The God Who Is There by Francis Schaeffer

There was a time when I, as a young Christian, was convinced that the evidence for Christianity was enough to persuade anyone to believe. That lasted a short time. Very short. I don’t think it was any more than a week. It ended the first time a neighbor in my dorm slammed his door on me. He didn’t care whether it was true; he just didn’t want to follow Jesus. That was when I first began to learn that we humans don’t always make our decisions for rational reasons.

Thankfully, though, I had Christian friends to help me sort that all out. They gave me a copy of Francis Schaeffer’s The God Who Is There, for one thing. Schaeffer had enormous experience with that same Escape from Reason — the title of a book he wrote to follow The God Who Is There. Christianity is a fully reasonable, rational faith, I learned. The grounds on which people accept or reject it, though, have to do with a lot more than mere rationality.

And some of it has to do with the way we handle the pain of life. Schaeffer saw that, more clearly perhaps than anyone since maybe Blaise Pascal. For him, sharing the Gospel often meant helping people face their own pain squarely, and recognize there is only one Healer of that suffering. He often spoke of sharing in the tears of those whom he was introducing to the truth of Christ.

That caring attitude has never come naturally to me, but I’ve tried to let Schaeffer’s example be a guide. Even with people like Richard Dawkins, atheist extraordinaire. The Blind Watchmaker by Richard Dawkins

Yes, Dawkins has played a part in forming me, too. I don’t know exactly when I first read The Blind Watchmaker: Why the Evidence of Evolution Reveals a Universe Without Design. I do know it was important to me. I’d heard the Christians’ side of the science/evolution debate, but I knew that that wasn’t good enough. I wanted to read the best from the side that said life developed just “naturally,” with no help from God.

I started in on the book expecting great things. In one sense I was satisfied. He’s a gifted writer; I enjoyed reading every page. But I was looking for one thing in particular. Right on its cover, the book promised to show how evolution “reveals a universe without design.” How would it do that? I wondered as I opened it. I was naïve: I actually thought he was going to answer the question.

But no; I kept wondering all the way to the end. Far from fulfilling the promise of a naturalistic explanation, the book was actually one long exercise in logical fallacy. Its argument could be summarized, “Suppose a world without design. It’s hard to see how all of life’s incredible complexity could have come about that way, but Darwin provides one possible answer. Therefore there is no design.”

That’s called circular reasoning, or assuming your conclusion. It’s the first error they warn you against in Logic 101. Dawkins gets his view of God badly wrong, too, rejecting Him as just another instance of “organized complexity” — perhaps a sort of assemblage of parts, as if any Christian thinker ever conceived of God that way.

I was only beginning my study of evolution, and barely beginning my direct encounters with the militant atheism Dawkins came to represent. But I could already see it was heading in irrational, poorly reasoned directions.

I’ve read dozens of books from the atheistic side since then. And if I’ve learned anything from Francis Schaeffer, I’m genuinely grieved to say it hasn’t gotten any better. Grieved, that is, for people like Dawkins whom God loves, and who are so brilliant in so many ways, but who have rejected both God and reason. Knowing God by J. I. Packer

For this is what they’re missing: the glory and the joy and the greatness and goodness of God.

I’ve saved the best for last here. I don’t re-read many books. But when we got married, my wife and I decided to keep her copy of J. I. Packer’s Knowing God instead of mine; it was in better condition — although hers is fairly beat up, too.

Packer opens the book with a quote from Spurgeon, and if he thought it worth introducing his book that way, then I’m sure I can do no better. “The Divinity,” says Spurgeon, “is a subject so vast, that all our thoughts are lost in its immensity; so deep, that our pride is drowned in its infinity.” And yet, “He who often thinks of God, will have a larger mind than the man who simply plods around the globe.”

That certainly includes the man who plods the globe to promote atheism. But it includes you and me, too. But in the end everything points back to God, not to us. Packer got that priority right. He’s helped me keep on target with it, too.

What a Friend We Have in Darwin