Bombshell Testimony at the 1st Day of Public Impeachment Hearing! 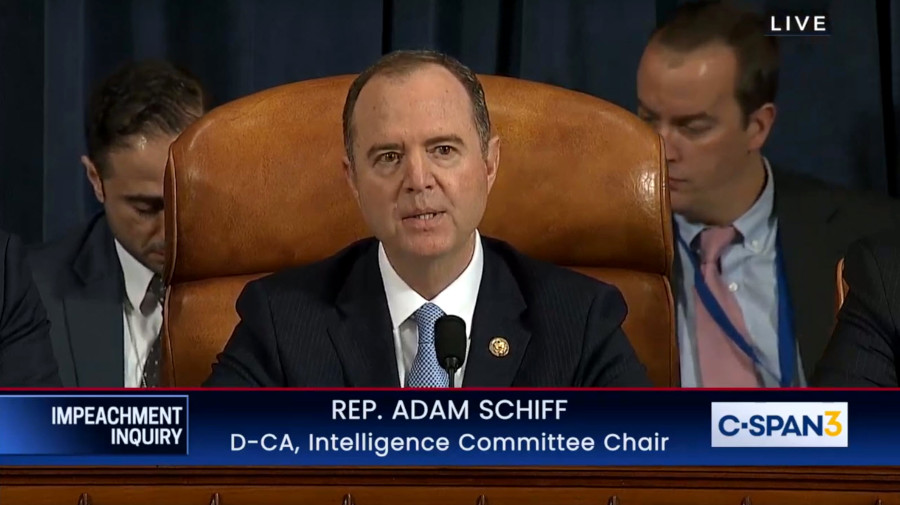 President Donald Trump is toast. After the first public day of impeachment hearings it’s clear he’s done. Finished. Might as well pack his bags tonight for Mar-a-Lago, hang his orange head in shame. The two witnesses who testified, Ambassador William Taylor and State Department official George Kent, blew the lid off the president’s acts with bombshell testimony that will echo through the hills and valleys of American history.

President Trump is clearly guilty and will be impeached by the House and convicted by the Senate!

Sorry. Thought I’d take a minute to self-identify as a CNN analyst. (Actually, even CNN’s Trump-hating legal pundit Jeffrey Toobin admitted the fact that “neither witness had direct contact with President Trump … that’s a problem.)

Overall Reactions to the First Day

My first reaction? I’ll never be able to look at Adam Schiff again without thinking of Tom Shillue’s impersonations of him on The Greg Gutfield Show. Not since Tiny Fey channeled Sarah Palin have we seen a political impersonation so uncanny and funny.

The Impeachment Drama has turned into an Abbott and Costello sketch.

And speaking of funny, Schiff pulled off the most hysterical line by a politician since Ronald Reagan told his wife after getting shot, “Honey, I forgot to duck.” Schiff said he doesn’t know who the whistleblower is.

How big a whopper is that? Facebook is shutting down pages that include the guy’s name, including LaCorte News, a conservative site with 3.4 million followers. (We like to call the whistleblower/leaker Eric Not-Idle.) Even though Schiff’s staff met with Eric Not-Idle, and his staff includes people who worked with the guy, we’re supposed to believe Schiff doesn’t know, but Mark Zuckerberg does?

To Put It Diplomatically

As for the substance of the testimony, we got to spend all day watching two career diplomats go into the weeds on U.S. policy on Ukraine and traditional diplomatic procedures. Oh, the president used “informal channels.” Newsflash: He’s the president. He can use the Nickelodeon Channel if that’s what he wants to do. Especially if he has no reason to trust Obama holdovers. (For that matter, if JFK didn’t use “informal channels” during the Cuban Missile Crisis, Washington would be a glowing radioactive wasteland.)

When Rep. John Ratcliffe asked the two directly, “Where’s the impeachable offense?” Dead silence. But we know the answer. Trump’s offense is he’s not one of them. He dares to do things his way. “That guy thinks he’s the president!”

The Impeachment Drama turned into another Hallmark Christmas Movie. Call this one Christmas in Diplomia. Kent with his bow tie and Taylor with his smoky chuckle are King Barack’s stuffy aides in the tiny nation of Diplomia. Then the princess’s new rough-and-tumble American boyfriend swaggers into the castle. They huff dismissively at him as he dares use the wrong fork at the state dinner and cranks the volume on “Proud to Be an American.” The aides are aghast! “We just don’t do that here in Diplomia!”

Ambassador Taylor said it was “clear” that President Trump was directly tying military aid to Ukraine’s investigating its own officials’ role in interfering in the 2016 campaign and the Biden-Burisma business. I don’t think he was lying. He’s not Adam Schiff. Of course, Taylor also admitted he hadn’t known about the DNC/Obama Administration effort to enlist the Ukraine. Meanwhile, Kent said he had warned about Hunter Biden’s involvement with Burisma, but was ignored. Oh, and he thought Burisma should be investigated.

Then what in the world are we here for? If it’s okay for your key witness to be concerned about the Biden business and want Burisma investigated, how is it a high crime for the President of the United States to be curious?”

Bill Taylor revealed significant new information in his testimony, saying his aide was told by Gordon Sondland that President Trump cared more about investigating Joe Biden than about Ukraine.

Yet, hearsay is just fine, said Democratic congressman Mike Quigley. He said today, “Hearsay can be much better evidence than direct.”

So first Democrats got rid the presumption of innocence (Act Two of The Mueller Report). Then they got rid of due process. Now a primary principle of evidence is turned upside down. Trump’s guilty and we are going to impeach him on the word of what somebody said they overheard somebody say. Meanwhile, over in Ukraine, President Voldymry Zelensky is shouting “None of this happened!”

The Democrats as Abbot and Costello

Friends, after day one, we can safely say the Impeachment Drama has turned into an Abbott and Costello sketch.

Democrats: “We are charging you with robbery.”

Democrats: “Oh yes he was.”

Zelensky: “No I wasn’t. What in the world are you talking about?

Zelensky: “But I wasn’t robbed.”

Trump: “But the person your witnesses witness overheard says I wasn’t out to rob anybody. In fact, not only did I not rob him, I gave him a whole bunch of money everyone wanted me to give him.”

Zelensky: “I was not robbed. And thanks for the dough.”

Democrats: “You were bribed!”

And no one is laughing.