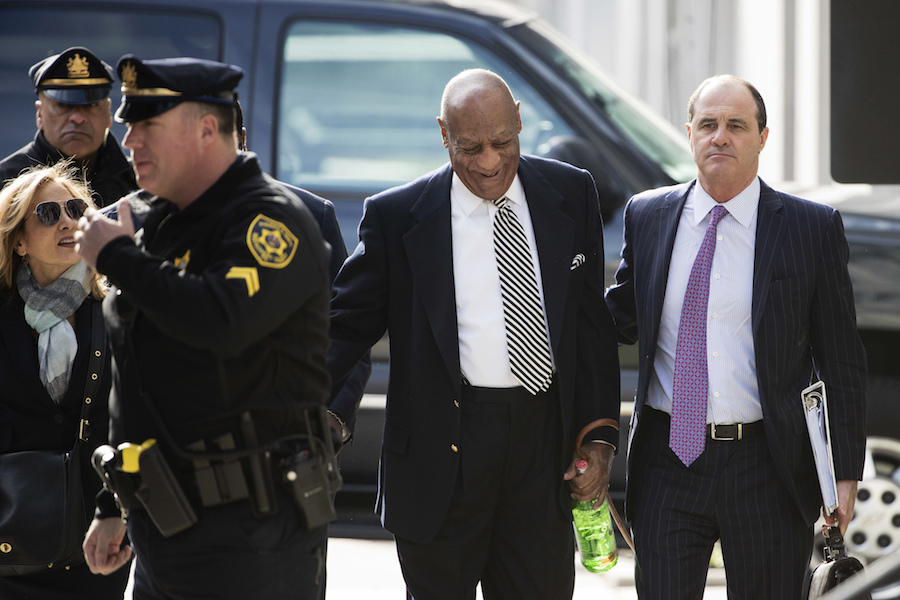 He lived in my town for a while, which we thought was kind of cool, since he was so famous and so loved. Bill Cosby worked on a doctorate in education at the University of Massachusetts. Friends would excitedly report the rare Cosby sighting. We had America’s beloved uncle in town.

Who was, it turns out, a sexual predator. A really horrible one. Yesterday a court convicted him of three felonies: “penetration with lack of consent, penetration while unconscious, and penetration after administering an intoxicant.” That’s just one woman, among the 50-some who say he did the same thing to them. The New York Times noted that “In recent years, Mr. Cosby, 80, had admitted to decades of philandering, and to giving quaaludes to women as part of an effort to have sex.”

And he was America’s beloved uncle. Look at the headline of this story from June, 2014, fewer than four years ago: “Bill Cosby Tops List of Most Admired Fathers in America According to New Poll.”

Cosby’s real history offers a lesson, but it’s not an easy one. Don’t believe the world’s story. Don’t take its heroes as your heroes. Question what the world tells you, and don’t take the public image at face value. Don’t, for example, assume America’s uncle and most admired father lives a virtuous life.

Look at the world’s story a lot more cynically than you’d like to. Because what we see is only a picture, created by people who tell lies for a living.

The world lies. Consciously, purposely, unabashedly, psychopathically. A massive, sophisticated, utterly unprincipled industry works without stopping to make you believe things that are not true. That wicked people are lovely people, for example. Vast amounts of money are to be made through creating public heroes. Vast amounts of power are to be gained. A lot of people invest themselves in making sure you believe those “heroes” truly live heroically.

Worse, we invest ourselves. We want heroes. We want the same heroes everyone else has. You and I want to think nice thoughts about people. We don’t want to be cynical. People don’t like cynics. Imagine that in 2014 when America made Bill Cosby its favorite dad, you told your co-workers or your Bible study that we don’t know what he’s really like and that for all we know he could be a rapist. They’d call you a jerk or a crank. Bill Cosby? Everyone loves Bill Cosby!

You want to see how this works in Hollywood? Watch the classic Betty Davis movie All About Eve. Read histories of the movie industry like Scandals of Classic Hollywood. Look at how many people, including the industry’s best and brightest, covered up for Harvey Weinstein, and a lot of guys nearly as bad. Note how many of his enablers got away with it — Hi Meryl! — thanks to their expert spin doctors and a media who needs them.

Want to see how it works in politics? Look at my recent congressman Tim Murphy. A pro-life hero‚ right up to the day the local newspaper revealed that he wanted his girlfriend to abort their child. He was, by the way, cheating on his wife. When the girlfriend called him on his hypocrisy in making pro-life statements, he wrote back, “I’ve never written them. Staff does them. I read them and winced.” Turned out he was also notoriously abusive to his staff. But who knew? We thought he was one of the good guys. We could only see the image he and his people created.

Scripture teaches this, but we don’t really listen. As I said, no one wants to be a jerk or a crank. The Psalmist tells us, “Put not your trust in princes,” because they can’t be trusted. “Do not look on appearance or on stature,” or riches and public image, the Lord says in I Samuel. “Man looks on the outward appearance” and gets it wrong.

The famous passage in Isaiah we take as a prophecy of our Lord says He has “no form or majesty that we should look at him, and no beauty that we should desire him.” We wouldn’t even recognize the Son of God, because He doesn’t look the way we expect a superstar or a superhero to look. He looked even less like that on the Cross.

Jesus saw the same thing. He said to the great and good of His day: “Woe to you, scribes and Pharisees, hypocrites! For you are like whitewashed tombs, which outwardly appear beautiful, but within are full of dead people’s bones and all uncleanness.” That’s what He thought of the religious ruling class.

Don’t make heroes of the world’s heroes. Some will actually be heroes and some will be monsters like Bill Cosby. You won’t know which is which. The world is that good at telling lies. God’s people live as strangers in a strange land, resident aliens, people who are just passing through. On the way, like the Israelites, we must keep ourselves free of the local gods, the local heroes.

We have our own. The Lord Himself. And all the great saints who’ve gone before us, and all the saints we know.

Confessions of a Hater