#BidenSpeech: A Reboot of The Great Dictator?

Joe Biden as Adenoid Hynkel and other thoughts on the speech. 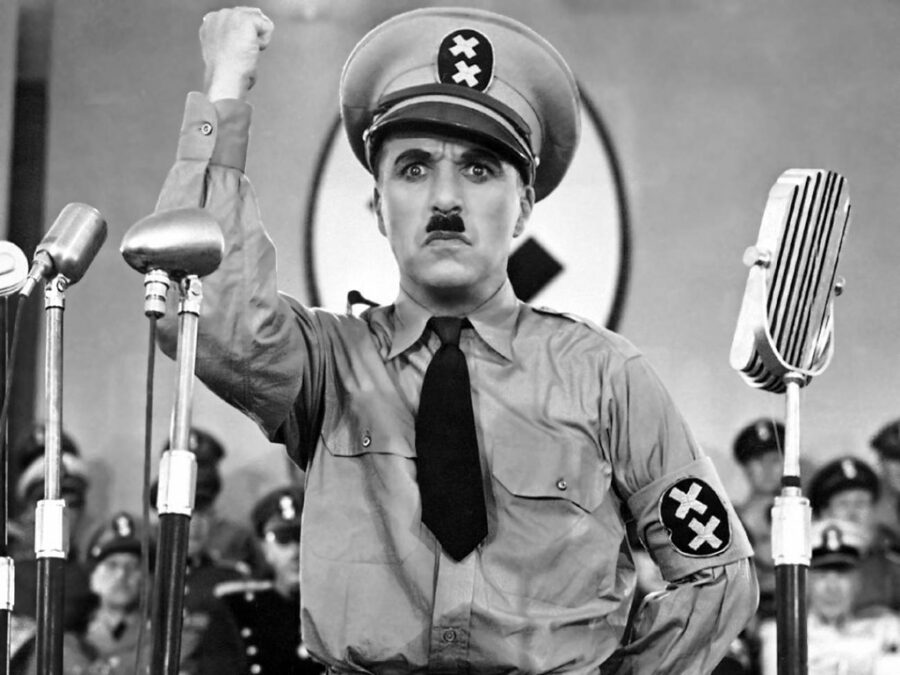 Joe Biden gave an historic address last night. Historic in that no U.S. president has ever spoken so slanderously, viciously against his own people.

So slanderous, so libelous, so dangerous was Biden’s labeling of “MAGA Republicans” … namely half the country … as dangers to democracy, a “threat to the soul of this country” one wonders if it rose to the rank of high crime or misdemeanor.

But the address was also truly bizarre.

No, Charlie Chaplin did not come back from the dead to reboot The Great Dictator. It only appeared that way. From the blood-red lighting, low camera angle to make Biden look more imposing, the use of U.S. Marines as props, the historic setting of Independence Hall, and of course the angry, bitter, arm-flailing tyrannical rant, it sure looked like a colorized update of Chaplin’s powerful satire of Hitler.

But it wasn’t a spoof. What happened last night was real. Meaning, the staging was cinematically more akin to the infamous Nazi filmmaker Leni Riefenstahl.

Erik Erickson made the same connection.

A Despicable Abuse of the Marines

Biden’s abuse of the U.S. military knows no bounds. From shoving woke-ism, CRT and radical gender ideology down their throats, to forcing experimental vaccines into their veins, to forcing great patriots out who would not take the jab, to forcing them to leave behind allies in Afghanistan, Biden assault on the military is unyielding.

And last night, he did it again. He used U.S. Marines as a backdrop for his political rant against his political enemies. This is abhorrent. So abhorrent, even liberal CNN anchor Brianna Keilar was aghast. She tweeted:

Whatever you think of this speech the military is supposed to be apolitical. Positioning Marines in uniform behind President Biden for a political speech flies in the face of that. It’s wrong when Democrats do it. It’s wrong when Republicans do it.

Remember, during the ANTIFA/BLM assault on the White House and Nations Capital in 2020, President Trump took a stroll to the firebombed Church of the Presidents with some military brass with him. And the media went bonkers.

Heck, when Trump simply invited a soldier just back from Afghanistan up on the stage at a rally last year to thank him for his service, that poor soldier was subjected to weeks of investigation. Accused of violating military code against partisan activity.

Here, in what was clearly a partisan event, Biden stationed two U.S. Marines behind him.

Joe Biden abused his authority as Commander-in-Chief for personal political gain, to attack his political opponent.

If Trump could be impeached for casually mentioning Biden in a phone call, how is this abuse of power not (again) an impeachable offense?

How Alinsky of Him: Biden Accuses Trump and “MAGA Republicans” of Rejecting the Constitution

Saul Alinski, in the Biden Administration bible Rules for Radicals, famously declared “accuse your enemies of what you yourself are doing.” Last night, Biden accused Trump and the “MAGA Republicans” of having no respect for the Constitution.

On the very same day …

News broke over just how massively the Biden Administration coordinates with Big Tech to censor opposition voices. An absolutely clear violation of the First Amendment. Documents and communications uncovered by the AGs of Louisiana and Missouri prove dozens of administration officials were in regular contact with social media giants, pressuring them to silence stories and people that countered the White House. They even got Facebook to shut down a parody account poking fun of Dr. Fauci.

A hearing was held over whether to appoint a special master to go through the documents seized by the Biden FBI in their raid of Mar-a-Lago. A raid that allowed agents to grab any and all documents connected to Trump from the day he was sworn in until the day he left. In other words, a general warrant. An absolutely clear violation of the Fourth Amendment.

His trillion dollar payout to college graduates — Biden’s one remaining loyal voting block — in the form of “forgiving” student debt is still in the news. As the purse strings belong to Congress, this is an absolutely clear violation of Article 2 of the Constitution.

In Tuesday night’s prequel to last night’s speech, Biden went after guns and mocked those who believe in the rights of an armed citizenry. An absolutely clear disregard for the Second Amendment.

Back in the 1930s, Charlie Chaplin saw the danger posed by Adolf Hitler, and was inspired to create The Great Dictator. Humor again is leading the way in the wake of Biden’s extraordinary speech.

For example, take the ever-funny Carpe Donktum. Carpe Donktum was so successful at mocking Biden and the Left in 2020 Twitter banned him. He was quick to offer a recap of the speech.

Babylon Bee, also banned by Twitter, offered an article of its own:

And finally, this morning, #PedoHitler is trending on Twitter.

The point? Looking at the setting. The Apocalyptic Lighting. The Soldiers. The Anger. The Destructive Rhetoric. The Words. The Gestures. You can look like a despot, sound like a despot, even act like a despot … and still be a joke.