Beagles, Frank Capra, and the Real Meaning of Christmas 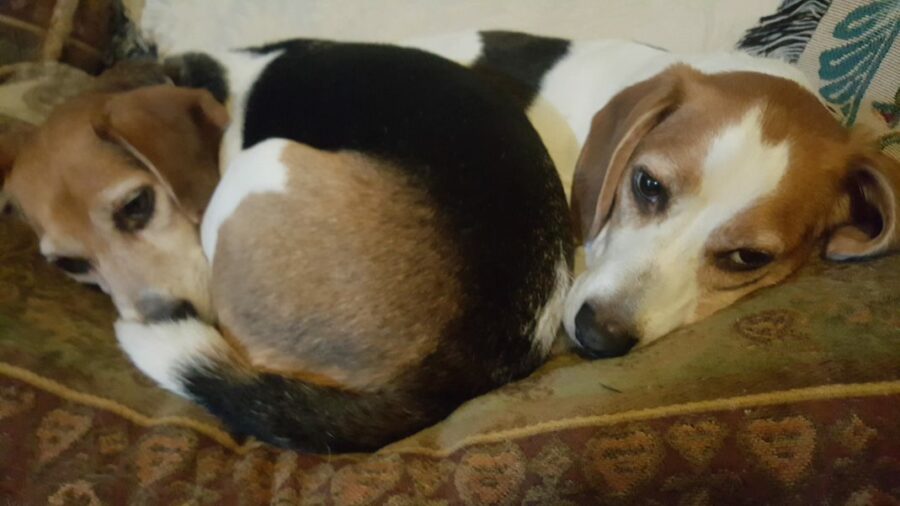 Senior Editor John Zmirak is on vacation, so The Stream is republishing some of his classic columns about dogs he has rescued or adopted over the years. This one is from winter 2017.

This year I had big plans for Christmas. I was going to fly from Dallas back home to New York City. I’d stay with my best friend since second grade, Anthony, and visit with other old pals who are still in the city. Then I’d schlep out on the Long Island Railroad to see my sister, her kids, and two-year-old granddaughter — who I’m told is now talking up a storm. Their family tradition, inspired by Seinfeld, was to go out to a Chinese restaurant on Christmas Eve and slurp down big stupid umbrella drinks while pretending to celebrate Festivus. After that I’d take Amtrak to Manchester, New Hampshire, to visit another whole set of neglected friends. My girlfriend would watch over Susie, my beloved aging beagle, and I’d see her for New Year’s Eve. (Most years I watch the dog while she goes to see her family in New Orleans — the girlfriend, not the beagle.)

I think it was Mother Teresa who said, “If you want to make God laugh, make plans.” Not one thing in my chipper Christmas tour went right. First and worst, dearest Susie came down with cancer over the summer, right after running four miles to mark her 16th birthday. (Read more about Susie here.) I had to skip two gatherings with candidate Donald Trump because of surgery, radiation, or chemotherapy appointments. Despite all that, Susie fell to the cancer in late September. That sweet little sinless creature passed peacefully as I petted her.

I was heartsore — having loved her for almost as long as parents do a child they send off to college. The best way to handle that, I decided, was to rescue more beagles. (It is what she would have wanted.) So I dropped a note to a Dallas beagle rescue, and said that come January I thought I’d be ready to take in two — preferably young siblings who liked to play together. They said they would keep me in mind. And so I prepared for my trip.

Be Careful What You Wish for

Then I learned what it means to be “careful what you wish for.” There were indeed two needy beagles, Finnegan and Rayne. They were bought as Christmas puppies from a pet store last year, and their owner couldn’t handle them. I could see from the pictures that they were kept tied up in a yard with some kind of twine — hence the rope burns on both their precious little necks. And no, he couldn’t wait till after Christmas. Or Thanksgiving. Or even Halloween. In fact, if they weren’t placed somewhere else soon, they might very well end up at a kill shelter, with a lifespan of maybe 48 hours at best.

So home they came with me, this sweet one-year-old brother and sister (complete with roundworm and hookworm), to race back and forth like jackrabbits, chew up my girlfriend’s shoes and devour books that I’d actually written. They found the dog training DVD I’d hopefully purchased, and showed me what they thought of the idea of “training” by chewing the case to bits. They race through the bustling streets every morning  and launch themselves in the air to greet each passerby, and plant a couple of paw prints on his business clothes. As part of their crate training, they insist on six walks per day, starting lately (as they decided) at 4:30 AM. And they think that the point of the exercise is to try to dive beneath moving city buses. I have never been so tired or quite so delighted in my life.

Adam and Eve had a vision of how their lives ought to be, which differed from God’s. They insisted on it, and their Fall took the whole world with them.

George Bailey Made Plans, Too

So I’m missing friends and family this year, to do right by the little lunatics whom God has entrusted to me. Thursday night I left the hellions for two whole hours to see It’s a Wonderful Life at Dallas’ gorgeous Majestic Theater. And that’s when the movie’s meaning hit me, with all the force of an airborne puppy paw. What was George Bailey’s life but a series of plans aborted, trips canceled and chances missed — at each point because God knew a whole lot better than George what he really needed?

That’s the story of Christmas, too — and everything that led up to it. Adam and Eve had a vision of how their lives ought to be. But it differed from God’s. They insisted on it, and their Fall took the whole world with them. It’s the reason people die and little dogs get abused.

God’s chosen people, the Jews, expected one kind of Messiah and got a very different one. The Lord as Our Father sees further than we do, and is always a step ahead of us. He showers us with graces unexpected, unasked for, even unwanted. But we must learn to trust Him, to gaze at Him with the simple, adoring eyes which our beloved pets turn on us. He will not give us stones when what we need is bread, or swap a fish for a serpent. But sometimes He’ll point us down a very different path than we wanted or ever planned for. The very heart of the Fall was in refusing our Father that trust. What saved us were Jesus’ words, “Not my will but thine be done.”

Now let me go sweep up those shredded rolls of toilet paper. A blessed Christmas to all!

Nearer My Dogs to Thee

It’s a Wonderful Life at 75: A Christmas Lesson Left on the Cutting Room Floor