What Happened to My Book and Why It Matters 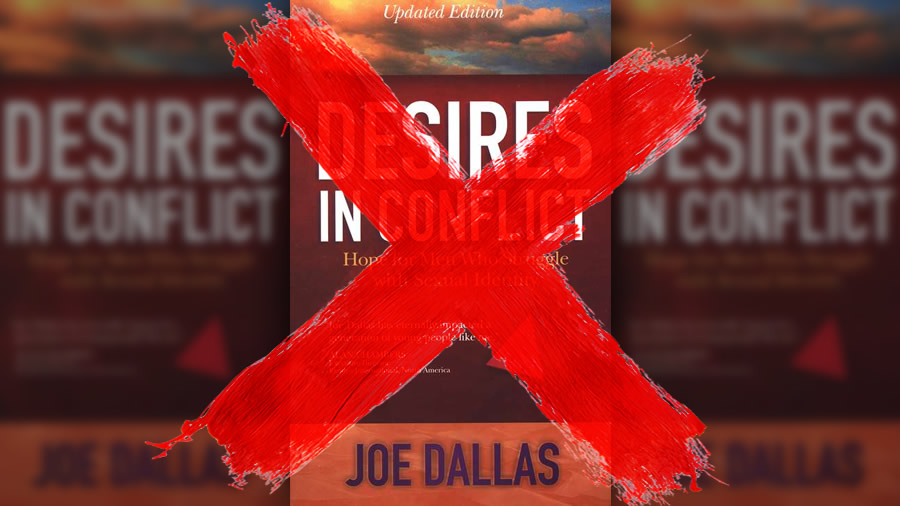 On July 8, my publisher informed me that my book Desires in Conflict, along with a number of other books on overcoming homosexuality by different authors, had been pulled off the Amazon.com catalogue. A gay activist had worked for months to convince Amazon to take this action and, bolstered by 80,000 signatures on a petition, his wish had been granted. (See here.)

Before venting, I’ll admit to some admiration for any guy who gets 80,000 people to support a cause, then persuades a corporate giant like Amazon to seal the deal.

Regardless, the purge is on, and only the most naïve will expect it to stop with us.

Folks like me who profess that homosexuality need not be a life sentence will be among the first to feel the ax of cultural banishment, that Yellow Star imposed before the horror really kicks off. Look for more of our books to be burned and for more of us to be muzzled.

But don’t kid yourself into thinking the mob will stop there. Heck, we’re just the appetizer.

The California State Assembly and Senate will soon vote on, and probably pass, a resolution advising pastors throughout the State how they should address homosexuality. Bans against counseling teenagers who may want to “go straight” carry the force of law in 18 states as of this writing. A Canadian father who refused to call his transgender daughter by the male name she prefers was found guilty of “family violence” and threatened with arrest.

Given the direction the winds are blowing, and assuming they stay the course, it’s certain that anyone publicly expressing the traditional definition of marriage and gender (be he pastor or laity) will eventually find his expressions banned, his livelihood threatened, and his safety uncertain.

Because We Said So!

Paranoia? I don’t think the journalist assaulted by Antifa thugs in Oregon a few weeks ago would agree. Nor would police officers threatened or assaulted by BLM protesters. (See here and here.) Nor, for that matter, that heartbroken Canadian father ripped away from his daughter for calling her his daughter. The Hard Left is hungry for the red meat of anyone who challenges it.

In these mad times, those who do challenge the Left get labeled racist, homophobic or fascist for no cause other than “We said so!” Then they’re punished by any means necessary for crimes not committed, only presumed.

And what crimes are the authors banned by Amazon presumed guilty of? Amazon itself hasn’t been clear, but no doubt the spreading belief that books branded as “Conversion Therapy” tools (meaning they help same-sex strugglers navigate the rocky sanctification path commended by the Bible) are somehow dangerous, causing homosexual people to hate themselves and inflicting psychological damage upon them.

That’s a tried and true tactic, the art of earnest repetition. Activist Bruce Voeller admitted as much when he recalled how he and other gay leaders repeated the “10% of the Population is Gay” mantra back in the 1980’s to help secure broader acceptance and political clout. He knew the statistic wasn’t accurate but, he asserted proudly:

“The concept that 10% of the population is gay has become a generally accepted ‘fact’ … As with so many pieces of knowledge (and myths), repeated telling made it so.”

So it goes. Traditional concepts of sex and marriage are labeled damaging to LGBTQ people. Those promoting such concepts as part of their religious beliefs are therefore harming lesbians and gays. Religious freedom doesn’t give you license to harm. Therefore, this form of religious speech must be stripped of First Amendment protection.

Repeated telling will make it so.

‘I Disagree With What You Say…’

Yet it’s not just the wildly un-American aspect of all this that sticks in my craw. It’s the double standard at play here and, for that matter, at Facebook, Twitter and YouTube — all of whom claim to respect diversity, all of whom routinely mute conservative voices.

So Amazon states that, “As a bookseller, we provide our customers with access to a variety of viewpoints, including books that some customers may find objectionable. That said, we reserve the right not to sell certain content, such as pornography or other inappropriate content.”

Fair enough, yet while banning my “other inappropriate content,” the company continues to carry books considerably more “inappropriate” (not to mention violence-inducing) than my harshest critics ever alleged mine to be.

For example, take The Turner Diaries. Timothy McVeigh did, both as product and inspiration for the 1995 massacre known as the Oklahoma City Bombing. The New York Times confirmed the general consensus that McVeigh was influenced by Turner to destroy 168 innocent lives that day and The Atlantic cites it as a “tactical blueprint for terrorism” inspiring hate crimes in the U.S. and Europe through more than a dozen different plots.

Then there’s The Anarchist’s Cookbook which, according to Amazon’s description, “has chapters on home preparation of weapons, electronics, drugs and explosives.”

Join Amazon Prime and you’ll get it delivered for free.

But those latecomers have to salute their Daddy, Adolf Hitler’s Mein Kampf, described by Live Science as “the manifesto from which all of Hitler’s atrocities stemmed.”

Yup, it’s there too. But relax. The “other inappropriate content” like Desires in Conflict has been removed. So we’re safe.

Sarcasm aside, I’m glad Amazon carries these and other books I’d call loathsome. Better to let vile ideas be exposed to daylight where they can be examined and rejected, than to presume the moral authority of deciding who gets heard and who gets squelched.

Tyranny, after all, never identifies itself honestly. It always claims to protect the public good, while knighting itself the keeper of that good and the protector of that public from ideas the poor, ignorant people simply can’t handle.

If this is American history in the making, then may I be counted among those who were on the wrong side of it. Then again, before stealing the “It was the worst of times” phrase from my hero Charles Dickens, I’m reminded of other things happening today that are beautiful and redemptive.

Like the Restored Hope Network conference I attended last month, where I worshiped alongside a few hundred other ministry leaders and participants — the majority of whom had decided, as I did 35 years ago, that God had something better than homosexuality in mind.

Or the Freedom March my wife and I witnessed later that week at the State Capitol in St. Paul, where person after person boldly testified of God’s transformative work. Young and courageous, a line of former lesbians, gay men, and transgenders took the mic, pointed to Jesus, and gave a whole new meaning to the phrase “Let the redeemed of the Lord say so!” (Psalm 107:2)

We’d be fools to let ourselves get distracted by glitches like this, considering the joy of serving Him, the honor of walking alongside the people we disciple, the Kingdom adventures yet to be had, and the fields that are, as Jesus so accurately said, more than ready for harvest.

And Desires in Conflict itself? Well, for all my boo-hooing about Amazon, the book’s hardly dead, and can still be purchased through a number of other outlets, my website included.

I’ve been blessed and humbled to tears for nearly 30 years now by people I’ve met throughout the country who’ve said, “I read this, related to it and got guidance from it.”

That’s an answer to prayer, because when my own journey began in 1984, I begged God to let me share some encouragement with at least one person who was going through this, so that he wouldn’t have to go through it alone. So whenever I hear from someone who got something out of Desires, I’m reminded of Paul’s analysis of painful human experiences:

Blessed be God, even the Father of our Lord Jesus Christ, the Father of mercies, and the God of all comfort; Who comforteth us in all our tribulation, that we may be able to comfort them which are in any trouble, by the comfort wherewith we ourselves are comforted of God. — II Corinthians 1:3-4

Which leads, quite logically, to his rhetorical question to the Romans: “What then shall we say to these things? If God be for us, who can be against us?” — Romans 8:31

We’d be fools to let ourselves get distracted by glitches like this, considering the joy of serving Him, the honor of walking alongside the people we disciple, the Kingdom adventures yet to be had, and the fields that are, as Jesus so accurately said, more than ready for harvest.
(John 4:35)

Meanwhile, there’s work to do. So if you’d like to add your voice to those protesting Amazon’s wrongful and heavy-handed ban, I and the others in The Banned (sorry) along with anyone cherishing freedom of speech and conscience, would deeply appreciate your signature on this petition being circulated to register our objections and concerns.

… And Thanks for Asking

On a personal note, to the many people who’ve written to ask how I’m doing, thank you.

Not to worry, a ban from Amazon is hardly the stuff martyrs are made of. I’m happy and blessed, not surprised, though saddened, and (as so often happens during strange events) reminded of a piece of dialogue from a favorite film — in this case, The Godfather.

In a key scene, Hyman Roth recounts the assassination of a close friend by a rival crime family. With a shrug he says that, much as he loved his friend, “I let it go. And I said to myself, ‘This is the business we’ve chosen.’”

Me, too. So for the business I’ve chosen (that is, my Father’s business, which an old sinner like me was amazingly chosen to be part of), I have no regrets.

Only a renewed zeal to do it better than ever, more than ever, and in the most God-honoring way.

Amazon Banned Her Book From Being Sold. Now This Christian Leader Speaks Out.