In this video, we show that Vicky Osterweil’s book, In Defense of Looting, self-destructs in three ways. One, it argues against other people’s property rights while using copyright law to protect the author’s property rights. Two, it rejects property rights because they support racism while appealing to intellectual property rights, thus promoting racism. Three, it condemns capitalism — “We would be able to live without a wage if we freely shared the products of society” (p. 16) — but then affirms capitalism in practice since the book is not freely shared with society, but rather sells for a tidy little profit at the easy-to-find capitalist mega-monster … Amazon!

Over and over, Osterweil undermines the Marxist case by doing the very things the book says shouldn’t be done. In other words, Osterweil’s actions contradict her convictions. 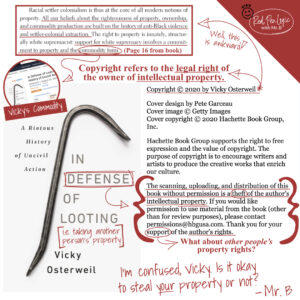 Tim Barnett has worked as a speaker for Stand to Reason since 2015, and serves on the pastoral staff of Cedarview Community Church in Newmarket, Ontario.

How to Avoid Falling for Fake News