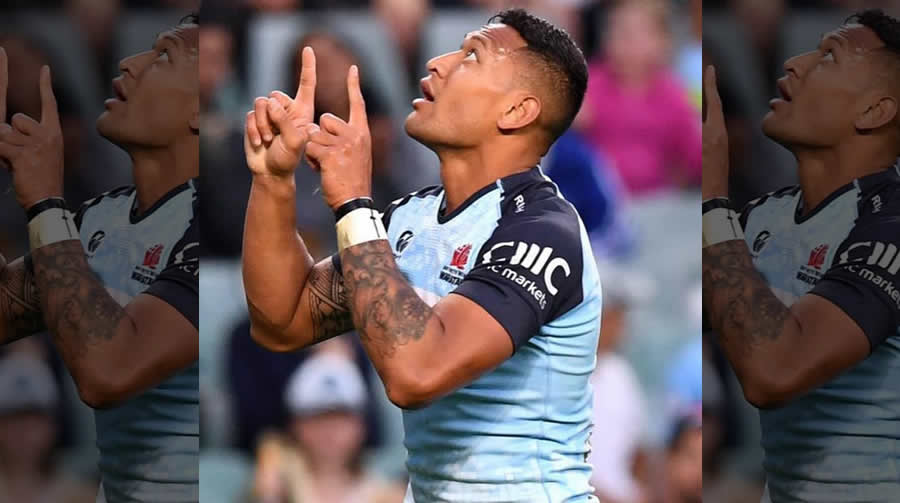 Update: Israel Folau, Australian Rugby player who was sacked because he posted a Christian message on Instagram, reached a settlement Wednesday in a lawsuit he filed for unfair firing from the team. Although Folau originally sought $14 million, the terms of the settlement remain confidential.

Israel Folau says he feels “vindicated” after reaching a settlement with Rugby Australia on Wednesday. Rugby Australia and Rugby NSW also apologized to Israel for sacking him and any “hurt or harm” the firing caused.

“We started this journey on behalf of all people of faith, to protect their rights of freedom of speech and religion,” Folau said in a video posted on his website. “We now look forward to the federal government enacting the legislation necessary to further protect and strengthen these rights for all Australians.”

“We are extremely pleased with the settlement reached today,” Folau continued. “With today’s acknowledgment and apology by Rugby Australia, we have been vindicated and can now move on with our lives to focus on our faith and our family.”

“I believe in a God that’s in control of all things. Whatever His will is, whether that’s to continue playing or not, I’m more than happy to do what He wants me to do.”

Australian star rugby player Israel “Izzy” Folau has done it again. He’s offended people by posting a Bible verse about sin and advising readers to repent. In 2018, Folau posted a similar message. This time, it cost him his multi-million dollar contract with Rugby Australia.

Earlier this year, Folau posted a statement on Instagram that is based on 1 Corinthians 6:9-10. It stated “Warning. Drunks, Homosexuals, Adulterers, Liars, Fornicators, Thieves, Atheists, Idolaters. Hell Awaits You. Repent! Only Jesus Saves.”

Those that are living in Sin will end up in Hell unless you repent. Jesus Christ loves you and is giving you time to turn away from your sin and come to him. _______________ Now the works of the flesh are manifest, which are these , adultery, fornication, uncleanness, lasciviousness, idolatry, witchcraft, hatred, variance, emulations, wrath, strife, seditions, heresies, envyings, murders, drunkenness, revelings, and such like: of the which I tell you before, as I have also told you in time past, that they which do such things shall not inherit the kingdom of God.
Galatians 5:19‭-‬21 KJV _______________ Then Peter said unto them, Repent, and be baptized every one of you in the name of Jesus Christ for the remission of sins, and ye shall receive the gift of the Holy Ghost.
Acts 2:38 KJV _______________ And the times of this ignorance God winked at; but now commandeth all men every where to repent:
Acts 17:30 KJV _______________

Rugby AU CEO Raelene Castle said that there wasn’t a specific clause in his contract but that Folau knew he wasn’t supposed to post Christian messages based on talks surrounding the year-old offense. “(There was no clause) within the contract but there was a number of documented meetings that were put in writing, both verbally and in writing, to Israel about our expectations,” she said. “It’s very disappointing from my perspective because I had a very direct and specific conversation with him about the expectations that I had,” she added. “He accepted that conversation, he said that he’d understood that conversation, he shook my hand at the end of that conversation, said he was very clear with it and yet he has gone off and done what he’s done.”

What he’s done is offended the gay community, both Castle and Folau’s coaches fear. Forget that the list included a whole host of sins. But Castle was quick to point out that they weren’t discriminating against Folau because of his religion. “This is not a religious discussion, this is a discussion around the employee, employer relationship and the values in the contractual arrangements within that agreement,” she said. “That’s on the basis on which we have served him a breach notice.”

AU Rugby issued a statement about terminating Folau’s multi-million dollar contract. “[Folau] had committed a high-level breach of the Professional Players’ Code of Conduct warranting termination of his employment contract.”

Although Folau loves the sport and wants to continue playing, he made it clear that Jesus Christ and his faith comes first. “First and foremost, I live for God now. Whatever He wants me to do, I believe His plans for me are better than whatever I can think. If that’s not to continue on playing, so be it.

“In saying that, obviously I love playing footy and if it goes down that path I’ll definitely miss it. But my faith in Jesus Christ is what comes first.”