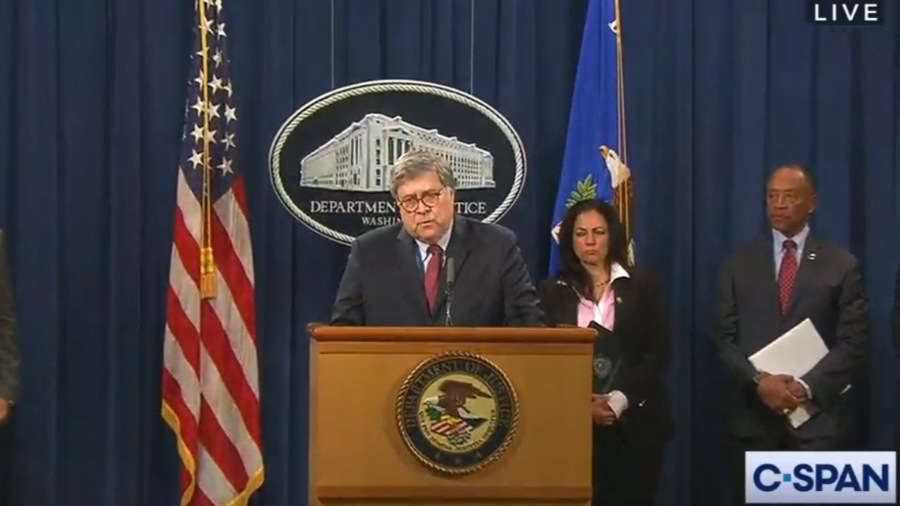 During an online press conference, Barr also said law enforcement should prosecute “extremist agitators” of all ideological stripes. He specifically cited Antifa and the Boogaloo movement.

“George Floyd’s death was not the first of its kind, and it exposes concerns that reach far beyond this particular case,” Barr said. “It is undeniable that many African Americans lack confidence in our American criminal justice system. This must change.”

Floyd died in the custody of Minneapolis police after he was seen on cellphone video pleading “I can’t breathe,” as since-fired police Officer Derek Chauvin had his knee on Floyd’s neck for nearly nine minutes. Three other police officers are seen on the video standing by, doing nothing to respond to Floyd’s cries.

Prosecutors have charged Chauvin with second-degree murder and the other three officers as accomplices.

Floyd’s death led initially to peaceful protests that subsequently turned into violent rioting, looting, and arson, first in Minneapolis and then spreading across the United States.

Barr said the rioters are “hijacking” the peaceful protests.

“The large preponderance of those who are protesting are peaceful demonstrators who are exercising their First Amendment rights,” the attorney general said. “At some demonstrations, however, there are groups that exploit the opportunity to engage in such crimes as looting. Finally, at some demonstrations, there are extremist agitators who are hijacking the peaceful protests to pursue their own separate and violent agenda.”

We have evidence that Antifa and other, similar extremist groups, as well as actors of a variety of different political persuasions, have been involved in instigating and participating in the violent activity.

We are also seeing foreign actors playing all sides.

The Department of Justice is working to restore order in the District of Columbia and around the nation. Here in Washington, we are working with the local police, the citizen soldiers of the National Guard and other federal agencies to provide safety and justice.

Antifa is a far-left violent group, while Boogaloo is a group seeking to start another civil war.

Barr said the Justice Department will work with state and local law enforcement agencies to find “constructive solutions” so Floyd’s death will not be in vain.