Atheist Group Gets Coach Banned From Praying With Players. Students Step up and Pray With Hundreds 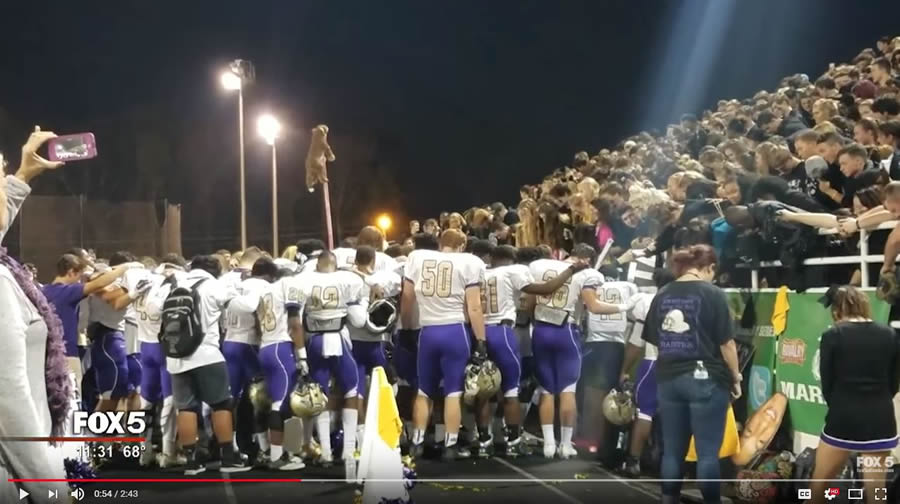 What the Freedom From Religion Foundation (FFRF) meant for harm “really turned into a positive.” The atheist group recently got Georgia high school football coach John Small banned from praying with his players. Now his players lead the crowds in prayer.

The East Coweta High School coach said that after the ban, students “took it upon themselves to organize a prayer with our students in the stands before the game,” Small said. “Instead of it being 100 players praying, it turned into 400 students praying. That’s their right and we are going to support them in that.” Small continued:

I think what is happened with this organization [FFRF], whatever their intent was, you tell teenagers they can’t do something, surely they are going to do it. … It has really turned into a positive because at the end of the day, we are trying to teach students about leadership and they should be the ones taking the charge on it anyway.

Last month, FFRF legal fellow Christopher Line wrote Coweta County Superintendent Steve Barker that it was unconstitutional for Small to pray with his players. “He endorses and promotes his religion when acting in his official capacity as a school district employee,” Line wrote. “Certainly, he represents the school and the team when he acts in his official role as Head Coach of the [East] Coweta High School football team. Therefore, he cannot lead his team in prayer and he cannot organize or advocate for students to lead team prayer either.”

Barker asked for legal guidance from the school board’s attorney. Its attorney wrote a memo outlining its policy on school prayer. “Representatives of the school cannot participate in any student initiated/student led prayer or worship while acting in their official capacity,” the memo stated. It added that “nothing compels an employee to make their non-participation vehemently obvious or to leave or flee the religious observance or prayer.” It let employees supervise “student initiated and run organizations, so long that it is clear that role is custodial.”

Small explained the policy this way: “We are not allowed to be in the middle of it but we have a right to be there with our players. We don’t have to flee. If my head is bowed, nobody can tell me what I am thinking. I am not leading the prayer. I am there supporting my kids. Whether I am praying or not, nobody can say I am or I ain’t.”

He isn’t upset at the school district’s guidance. Everyone, he said, is “on the same page. There is nobody here that is against each other. Leadership is a tough position and you are not going to make everybody happy.” He doesn’t feel the new policy violates his rights. “Even though we don’t like the law, it is what it is and we are supposed to be obedient to that as well.”

The Fellowship of Christian Athletes (FCA) will be hosting a community prayer rally on Thursday night inside of East Coweta’s Garland Shoemake Stadium, The Christian Post reported. Small encourages everyone to come:

In the community, there is as a lot of people that wanted to join up and have a community prayer. We are obviously under attack all the time. This battle is not a fleshly battle. This is a battle against ‘principalities of darkness.’ That is what the word says. … FCA is sponsoring prayer rally here at the school and anybody can come and anybody can be a part of it. It is just a great way for the community to get together and come together.

FCA Director Rob Brass said that FCA’s decision to hold the rally at East Coweta was “a natural reaction for us as followers of Christ.”

“As coach said, this is a spiritual war,” he explained. “The first thing we are called to do is to pray. With all the misinformation and misunderstandings out there, we want to pull our community together in unity to pray for what’s going on here.”

FCA didn’t like the ruling keeping coaches from praying with their players. “But if that is the way that it has to be, what it does is it forces, in some ways, our kids to step into that leadership role and take the movement of Christ and carry that banner forward themselves. Part of the beauty of this whole thing is that the kids are stepping up and leading.”

Freedom from Religion Foundation Slams Clergy, Says ‘Collapse of Churches’ Would Do No Harm