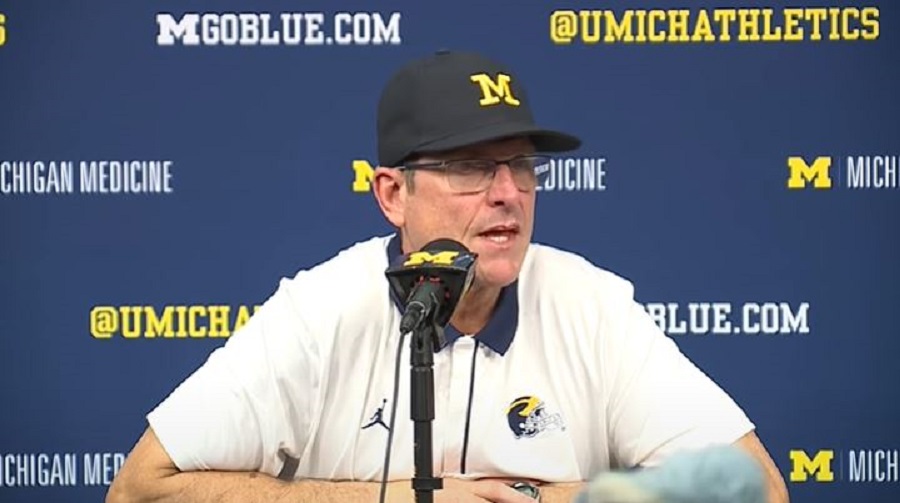 Ohio State is my favorite college football team. I went to grad school there, post-Army, determined to never root for that school (being originally from Kentucky). But resistance was futile. Within a very short time, I was indoctrinated into all things Buckeye — especially, of course, football. And central to that creed is loathing for TTUN, “That Team Up North.” Michigan. I have long said I’d root for the Taliban against the Wolverines. No matter who the head football coach is in that barren wasteland — Michigan, not Afghanistan.

Some of them proved more annoying than others, however. Two, in particular: Brady Hoke, who childishly always referred to Ohio State University as “Ohio.” And Jim Harbaugh, whose weirdness, recruiting shenanigans and sideline temper made him a humorous piñata for Bucks’ fans. It didn’t hurt that for this entire millennium OSU has dominated UM in football, winning 17 of 20 meetings (and two national championships, while UM hasn’t won one since 1997). Yes, Harbaugh managed to beat the Bucks and win the Big “Ten” last year, but that aberration only made us detest him all the more.

But now I have to admit I was wr… I was wron… I was not exactly right about Jim Harbaugh. Turns out that on a much bigger and more important issue than college football (yes, such exist, SEC fans), Harbaugh is on the side of the angels. Dare I say it? God’s side. He’s pro-life. In case you hadn’t heard, this past weekend Harbaugh was the keynote speaker at a Catholic pro-life dinner in Plymouth, MI.

Now like most major college football coaches, he had waded into current events before. Notably “social justice” issues, following the death of George Floyd. Kirby Smart of (now defending) national champion Georgia did so. OSU coach Ryan Day tweeted in support of BLM protestors. And so on. Harbaugh likewise, and even tied that topic to the activism of his former San Francisco 49ers QB, Colin Kaepernick. The coaches had to stay popular with their players, many of whom demanded ACTION. Of course, that sort of activism is acceptable — indeed, expected — by the Left. And you might not know it, but quite a few college sports reporters, and even many fans, are “woke.” ESPN leads the pack in this regard. (We won’t even go into pro sports, which is its own woke cesspool.)

But the media establishment, including the sports side, are not happy with Jim now. Oh no. How dare he opine, drawing on his Catholic faith, that we should “let the unborn be born.” How dare he quote the prophet Jeremiah: “Before I formed you in the womb, I knew you. Before you were born, I set you apart.” How dare he adduce “the many thousands that I’ve coached” to argue that “the unborn are amazing gifts from God to make this world a better place.”

The usual suspects came out of the wormwoodwork to attack Coach Harbaugh. Former ESPN racial grievance-monger Jemele Hill rubbed both IQ digits together and came up with “Don’t want an abortion? Don’t get one.” “The Palmer Report” — the Left’s hysterical answer to questions no one asks — called for Harbaugh to be fired. The NY Times predictably weighed in, calling the Catholic pro-life fund-raiser an “anti-abortion event” and trying to start a fight between the football coach and the university’s interim president.

Even Michigan Fans Are Attacking Him

Closer to home, Ann Arbor’s campus student newspaper, The Michigan Daily, offered us the standard issue, clueless and also grammatically challenged, undergrad take. “With the right to choose, sitting in political limbo, Harbaugh has made it clear which side of the line he stands” [sic]. The writer thereof also refers to the “anti-abortion” event, sans quotation marks; yet inserts them every time “pro-life” is mentioned. “Total Pro Sports” (which clearly covers college football, as well) ran a column on the Michigan fan hatred directed at Harbaugh for daring to be an actual Catholic Christian, and to express that publicly. Here are some excerpted gems. Since Jim “doesn’t have a vagina,” he shouldn’t opine on this topic. “Just shut the f*** up.” For “stepping into the pro-life pond, he’s truly an idiot.” And so on, ad nauseum.

Last night I checked the two major Michigan sports sites, “mgoblog” and “maizenbrew.” The former is more combative and emotional, while the latter — being part of “SB Nation” — tends toward the analytical and sober-minded. “Mgoblog” had a post up on the topic of Harbaugh’s pro-life address. Almost all of the comments that I read were quite negative, although a few did point out that a Catholic being pro-life is not exactly news. But today that post, and of course all attendant comments, had been deleted. As for “maizenbrew,” there was no mention of the Harbaugh controversy at all. (I even looked at the two main analogous Ohio State sites, “landgrantholyland” and “elevenwarriors,” thinking they might take the occasion to pile on Harbaugh. Crickets.)

Praying for Harbaugh, With One Proviso

It’s said you can judge a man by his enemies. If that’s so, Harbaugh has made all the right ones on this issue. Bravo to the Michigan coach’s stance for unborn life and actual Catholic, Biblical teaching. In this regard all of us pro-life Christians should be on his side. This Buckeye fan is. Although come Labor Day weekend, I’ll be praying for him every day — but Saturday.