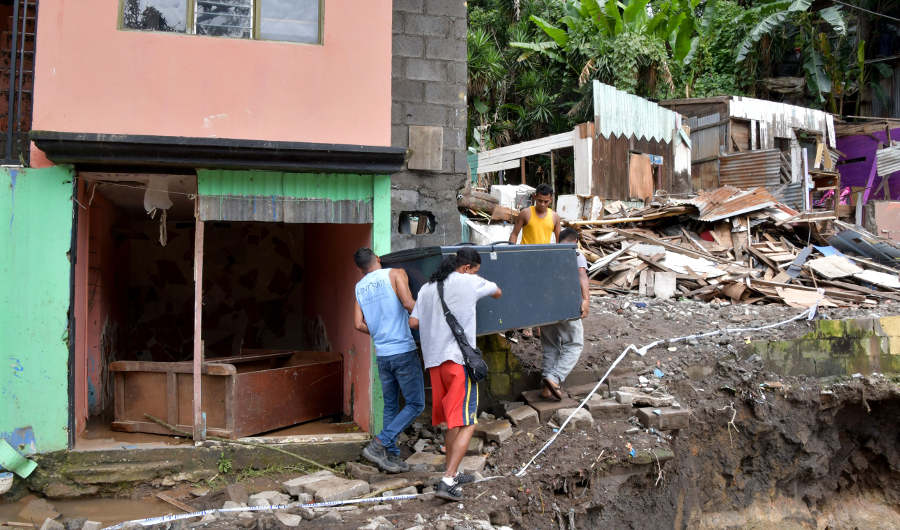 Men carry a refrigerator at a residential area affected by a landslide due to heavy rains caused by Tropical Storm Nate in Los Anonos neighborhood of San Jose, Costa Rica, on Oct. 6, 2017. A national emergency alert was declared in Costa Rica, where eight people died, including a three-year-old girl, after they were hit by falling trees and mudslides. An alert was issued for people to be wary of crocodiles that might be roaming after rivers and estuaries flooded.

By Michael Bastasch Published on October 8, 2017 •

An Associated Press reporter sent some questions to Dr. Roger Pielke Jr. about what role global warming played in this year’s slew of billion-dollar natural disasters.

Pielke, an expert on natural disaster costs, apparently didn’t give AP reporter Seth Borenstein the answers he was looking for, because his ensuing article didn’t have any quotes from the University of Colorado professor.

Pielke’s answers largely reflected the work he’s been doing for years — that there’s no evidence global warming is making weather more extreme. Any increase in natural disaster costs is caused by an increase in wealth and population, according to Pielke’s research.

Mann is an ardent advocate for liberal policies to address global warming, and has even suggested the fossil fuel industry has launched a campaign to marginalize his work. Mann recently gave an academic freedom lecture at the University of Michigan, where he attacked his critics as “climate deniers” shilling for energy companies.

Borenstein also quoted a meteorologist at the insurance company Munich Re, who said a bigger role in natural disaster costs is that more people are living in areas prone to extreme weather.

Pielke suggested his answers didn’t match the narrative Borenstein was looking for.

The National Oceanic and Atmospheric Administration (NOAA) released a report on the number of natural disasters costing more than $1 billion this year. NOAA said the damage from hurricanes, fires, droughts and floods would make 2017 an “unprecedented year,” Borenstein reported.

“It is likely to tie or break the record for billion-dollar weather disasters that was set in 2005,” Borenstein wrote. Borenstein asked Pielke six questions about NOAA’s report by email, but included none of Pielke’s responses in his subsequent article.

And of course, Borenstein’s article did quote Mann, who told him global warming was making extreme weather worse, despite the fact respected scientific institutions have slapped down that claim.