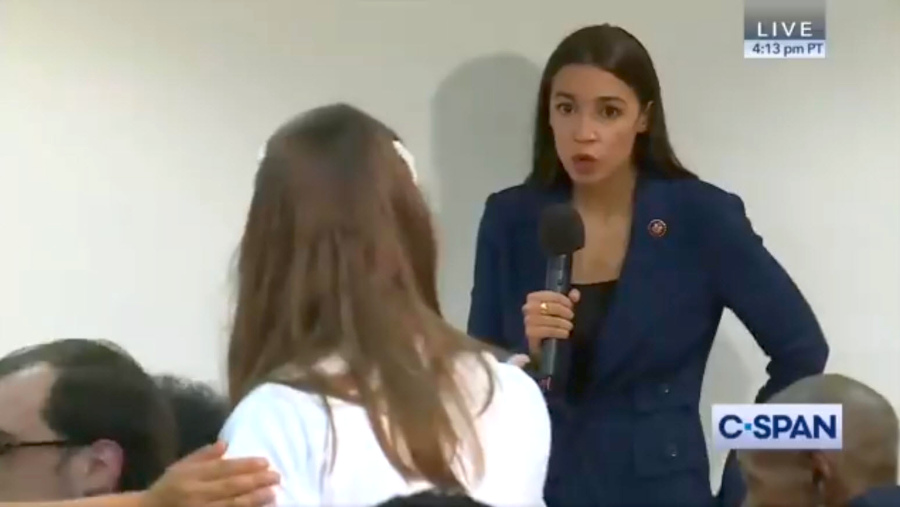 It’s nasty out there on Twitter. Alexandria Ocasio-Cortez vs. Ted. Cruz:

AOC: “Mike Pence literally does not believe in science.”

Ted Cruz: “As you are speaking as the oracle of science, tell us, exactly what is a Y chromosome?”

AOC: “I’m surprised you’re asking about chromosomes, given that you don’t believe in evolution.”

(You can see the full tweets below.)

AOC didn’t say exactly where she got the idea Pence “literally doesn’t believe in science.” It could be his hesitation to set up a needle exchange for HIV patients in Indiana. That’s the one that’s made the news this week. It runs parallel with other, similar charges, such as the old one that failing to support embryonic stem cell research equals not believing in science. It might have something to do with global warming disputes, which are (believe it or not) still disputes.

People who believe in science should also believe in thinking straight. People such as AOC with political axes to grind probably can’t afford to do that. But let’s at least offer some help to people who have to put up with their nonsense. Three points:

1. Believing in Science Doesn’t Equal Believing Every “Scientific” Claim Is a Good Idea

Josef Mengele believed in science. (I’m being incautious, using the phrase “believing in science” this way. I’m just echoing AOC for now; I’ll correct it in point 3.) An SS officer and physician in Hitler’s Germany, Mengele performed grotesque medical experiments on unwilling, living human beings. His work actually produced new knowledge, but the Allies chased him out of Auschwitz anyway, and he spent much of the rest of his miserable life on the run. As an abortionist, by the way.

I guess the Allies didn’t believe in science. Either that, or they believed science couldn’t set its own boundaries; it had to be practiced within the limits of sound, humane ethics.

AOC might not agree with Pence’s ethical values. She doesn’t have to. Whether she does or not, no thinking person could possibly confuse “I think this is ethically wrong,” with “I don’t believe in science.” No thinking person, that is. The two statements just don’t have anything to do with each other.

The corollary, of course, is that Pence’s ethical values have absolutely nothing to do with his being either scientifically qualified or unqualified to lead our nation’s coronavirus response.

I could have simply titled this second section, “Oh, good grief.”

Not only Democratic demagogues but also some activist evolutionists believe that disbelieving in evolution equals rejecting all science. “How can you possibly deny Darwin in an age of computers and space travel?” Easy. First of all, “evolution” is a slippery, multi-faceted term. (Of course that makes it especially useful for some politicians.) It can mean everything from simple change over time, to the belief that all organisms descended from one common original ancestor, to belief in neo-Darwinian processes making that happen, to the belief that it all happened purely by chance.

Everyone believes in evolution in that first sense. In the second, third, and fourth senses it grows progressively more controversial — and that includes controversy among top-ranked scientists.

Second, it’s unbelievable prejudice to suggest that people who don’t buy evolution on all four levels must be as scientifically stupid, as Cortez suggested Cruz must be. Or maybe it’s not prejudice; maybe it’s more like grade-school-playground name-calling. “You’re so stooopid!”

3. What’s All This About “Believing in Science,” Anyway?

Who “believes in science”? What does it even mean? Does it mean believing science provides important, intriguing, fascinating, useful knowledge? Everyone believes in science that way. Does it mean every life decision must be guided by science? If that’s what AOC has in mind, that’s just mindless. Science doesn’t guide anything. It defines a space in which humans can make things happen, yes; but that space is very broad, and within it, science offers no advice whatsoever. All it says is, “This thing is physically possible, that other thing is not.”

Actually to make decisions within that space is a matter for human values. Better yet, biblically-derived values. AOC may not like that, but she must at least own the fact that guidance comes from values, and values don’t come from science.

It’s one thing to believe science, and another to believe in science. The one approach recognizes that science can tell us what can happen. The second puts science on a pedestal almost like a god, granting it power to tell us what should happen.

I thank God for a vice president who doesn’t believe in science; not that second way, at any rate.

(This explains Cruz’s Y-chromosome question to AOC, by the way.) If she really wants to talk chromosomes, why does she insist there’s no difference between men and women?

Mike Pence literally does not believe in science.

It is utterly irresponsible to put him in charge of US coronavirus response as the world sits on the cusp of a pandemic.

This decision could cost people their lives. Pence’s past decisions already have. https://t.co/NhMPOusOWm

As you are speaking as the oracle of science, tell us, what exactly is a Y chromosome? https://t.co/t4XVVzWr3A

Sen. Cruz, while I understand you judge people’s intelligence by the lowest income they’ve had, I hold awards from MIT Lincoln Lab &others for accomplishments in microbiology.

Secondly, I’m surprised you’re asking about chromosomes given that you don’t even believe in evolution. https://t.co/vOIwJhpl7q

Then why do you continue to insist that men and women do not exist https://t.co/KERyKeaDlp