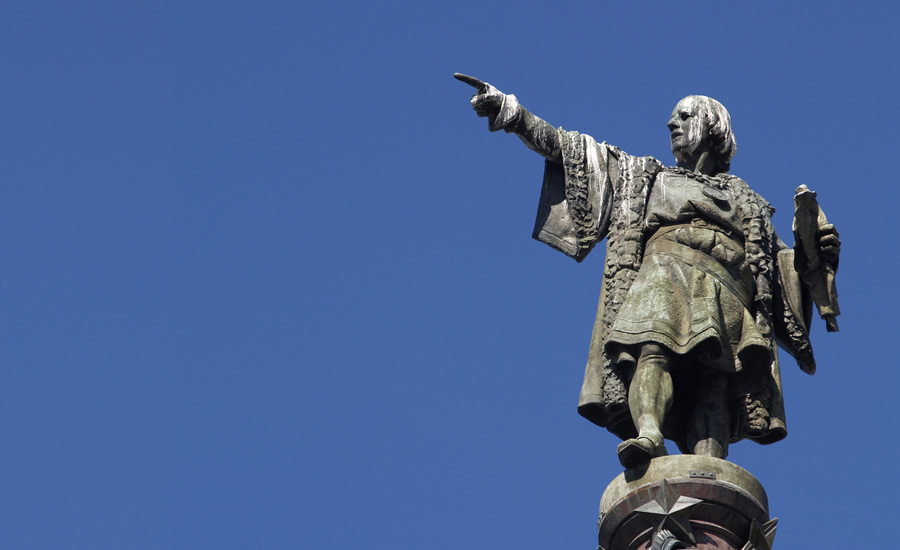 This tweet is, believe it or not, from the former prime minister of Malaysia. “Muslims have a right to be angry and to kill millions of French people for the massacres of the past,” Mahathir Mohamad writes.

It was the 12th point in a string that began with a tweet about the French Muslim boy who beheaded his teacher for showing insulting pictures of Mohammad. It continued with complaints about the decadent West. And then: Kill Frenchmen.

My favorite righty pundits are making points about Twitter’s liberal bias. They’re right. But they’re also missing the bigger thing. The bigger thing is what all those who dabble in Anti-Columbus wokeness are inadvertently, ignorantly, stupidly setting us up for.

They’re setting us up for our fellow Americans sending tweets like Mahathir Mohamad’s. And perhaps, God forbid, someday acting on it.

Against us and our children and grandchildren and generations unborn. If the Woke deem them to be carriers of inherited racial guilt. And they will.

That’s what phrases like “systemic racism” and “white privilege” and the asininity of feeling aggrieved by Christopher Columbus 514 years after his death are really all about. Prime Minister Mohamad’s tweet is where it will all lead.

The thing that breaks my heart about all this (one of the things, anyway) is that the cry of the oppressed is real. Some of the grievances are just.

Slavery, Jim Crow, that was real. The legacy is still with us. Some bad things are baked into the cake. I still won’t call the problem “systemic racism,” a phrase which implies malice on the part of innocent people.

To this day, there are certain ways in which white people can navigate the country easier than black people. I still won’t call it “white privilege,” an accusatory term, when what black people lack is not privilege, but liberty.

“Systemic racism” and “white privilege” … these are phrases often used by well-meaning people who have no idea of the agenda they are empowering. Of the demons they are unleashing. Read Dr. Mohamad’s tweet. This is the road you are putting us on. This is where it all leads.

My sympathies at the start of all this were entirely with the Black Lives Matter protesters. Even before George Floyd. When it was Ahmaud Arbery. I got a lot of grief for it. Abuse from righty friends on FB. Obnoxious voice mails on the Family Institute of Connecticut’s landline, rude emails to our inbox, enraged attacks on our social media.

None of which caused me to budge an inch. Much the opposite. See my Stream columns in May and June. I stand by them. As I say above, this stuff is real.

But 2020 is what it is, what it has been. The riots and looting. The war on the police. (“Let them die.” A mob actually chanted that outside a hospital where wounded cops were being treated.) The toppling of statues of Washington and Lincoln.

The desecrating of churches and images of Christ and the saints. And something close to me: the decapitating of the statue of Christopher Columbus in front of the city hall of Waterbury, Connecticut, on the 4th of July.

Ah yes, Columbus. The scapegoat for any bad thing that has occurred in the Americas in the subsequent 528 years since he landed here.

People more knowledgeable than me can defend the man (and many distinguished historians have). What interests me is the agenda behind the attack on Columbus.

Columbus is attacked not really because of any badness, real or perceived, on his part. He is attacked because our civilization on this continent begins with him. That is the real target, the civilization of which we are all a part. The West. Christendom.

Every time you dabble in Columbus hatred, every time you excuse the rioters and looters in our streets, you empower that hatred of Western Civilization. You unleash demons.

It is a rare instance, at this still-early stage in The Revolution of 2020, that the demons being empowered here are so clearly visible as they are in the former prime minister’s tweet.

Unless we can somehow separate out legitimate grievances from the agenda exploiting those grievances for other ends, Mohamad’s tweet is where this is all headed. This is the agenda you are empowering when you dabble with the radical chic of 2020. That tweet.

And it is foolish of you to do so.