In a speech to the largest-ever Night to Honor Israel, Nikki Haley reviewed her first 18 months as U.S. Ambassador to the United Nations. Her bold moves have “sent shockwaves” through the world’s largest cooperative body. 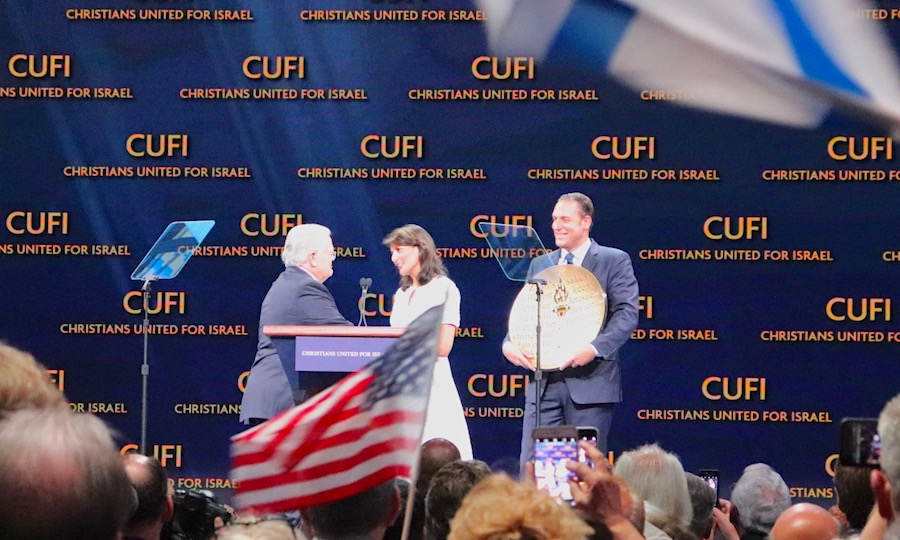 The annual gathering of Christians United for Israel swelled to well over 5,000 people on Tuesday night for its climactic event, a keynote speech by Ambassador Nikki Haley. A firebrand diplomat who has faced down fierce critics at the United Nations, Haley was wildly cheered by the crowd which represented all 50 U.S. states.

“Our approach on Israel is tied together by one major idea,” she said. “Israel must be treated like any other normal country. It cannot be the case that in an organization with 193 countries, the United Nations spends half of its time attacking only one country. We will not turn a blind eye to it!”

“Israel’s fight is our fight,” stated Haley. “From now on, every country knows that the United States will not just block anti-Israel measures, we will shine a light on those who are responsible. There won’t be any more free passes for those who bully Israel at the U.N.”

It also cast a spotlight on how Israel advocacy has been a uniting thread for evangelical Christians who support the Trump Administration. Briefings by CUFI leaders use the common bonds of Christian-Jewish beliefs as an entry point to examine current threats to the state of Israel. Ambassador Haley followed suit in her rousing speech, often simplifying complex Mideast politics in stark moral terms.

“We stand with Israel because we believe in right over wrong,” said Haley. “We believe in freedom over tyranny. … You have all seen the recent violence at the Gaza border. The people of Gaza live in miserable conditions. They deserve a much better life than what is imposed on them by Hamas.”

Haley cited how the U.N. has passed over 600 resolutions on “the Israel-Palestinian issue” without one mention of Hamas. An offshoot of the Muslim Brotherhood, Hamas has been designated as a terrorist organization.

“We respect everyone’s right to peacefully protest,” she continued. “But no one should be fooled about the role of Hamas. Many of the protesters in Gaza are anything but peaceful. If they were peaceful, there would be no burning tires. There would be no Molotov cocktails. There would be no flaming swastika kites flying into Israel, burning thousands of acres of land.”

She noted the close ties of Hamas to the Iranian government. The ongoing threat of Iran was a theme throughout the evening, including in remarks by Israeli Ambassador to the U.S. Ron Dermer.

“Before President Trump came into office, Iran’s regime was riding high,” stated Dermer. “Sanctions relief had unleashed the Iranian tiger across the Middle East — in Iraq, Syria, Lebanon, Yemen, Gaza and beyond.” Others have noted Iran’s ambitions in the Mideast region.

He alluded to the $1.7 billion cash payments the Obama Administration made to Iran as part of its nuclear accord with the rogue regime. In May, the Trump Administration announced the U.S. is terminating that deal and reinstating sanctions.

“Today, [Iran] is on the ropes,” Dermer continued. “Iran’s currency is collapsing. Companies from Europe and Asia, afraid of U.S. sanctions, are pulling out of Iran. And protests continue across Iran as its brave people rise up against a brutal tyranny.”

Since its founding in 2006, CUFI has seemed to spring up from the ground. However, its history stretches back farther. In September 1981, Pastor John Hagee and his wife Diana convened the first “Night to Honor Israel” at the Theater of Performing Arts in San Antonio, Texas.

Thousands of these evening events have taken place across the U.S. since then, each raising funds for charitable causes in Israel. CUFI and related groups have “donated nearly $100 million to Israeli and Jewish charities” according to the ministry. On Monday, the largest Night to Honor Israel kept with tradition in opening with both the American and Israeli anthems.

Tonight in Washington, DC, the largest ever Night to Honor Israel just opened with the Israeli national anthem “Hatikvah”

Ambassador @nikkihaley will soon address these thousands of CUFI members — live on @cspan and streaming at @CUFI #CUFI2018 pic.twitter.com/qErYshBA9d

Even with its charitable track record, some observers bristled at the flag-waving adoration among believers at the CUFI gathering. Some in the audience yelled “Hallelujah!” at any mention of President Trump; they sat when the large choir and orchestra led praise songs.

For decades, Mark Tooley of the Institute on Religion and Democracy has helped Christians navigate issues of church and state. Formerly on staff with the CIA, Tooley has critiqued both Obama and Trump Administrations while seeking to uphold human rights in foreign policy. “Christians in every country and under every government should always be aware of the limits of politics and human capacities,” stated Tooley via e-mail. “Even the most ideal regime is far, far from the absolute justice and peace of God’s Kingdom.”

He assessed the Zionist movement from a standpoint of orthodox Christianity. “Israel is a nation of sinners like all other nations,” he continued. “Of course its policies merit critique. But any critique should affirm Israel’s right to existence and defense. We must acknowledge the focused hatred from many of its enemies who wish its destruction.”

Pastor Dumisani Washington leads a church in northern California while also serving as diversity outreach coordinator for CUFI. In an interview, he attempted to sum up how CUFI leaders view current events in light of the Bible.

The minister pointed to Dr. Martin Luther King, Jr. as an example. “Dr. King said that Israel has the right to exist — and the right to secure its borders. That’s the fundamental understanding. As a Christian, he made a justice case for Israel.”

Finding A “Mature” Posture on Israel

For her part, Ambassador Nikki Haley clearly understood how to relate to this audience.

“I have always been a person of deep faith,” she stated. “No, I am not Jewish — even though that surprises some people. I was not raised as a Christian either. Twenty years ago, my faith journey brought me to Christianity, where I have found strength in my faith and trust in my heart.”

Haley also spoke of the significant geopolitical moves she has taken in her role. Notably, the U.S. withdrew from UNESCO last October and from the Human Rights Council last month. Both decisions were related to anti-Israel bias perceived in these U.N. bodies. “A Mideast in which Israel is constantly threatened is a Mideast that can never reach its potential for wider prosperity for all peoples in that region,” stated Tooley. He lamented how friends of Israel are often lampooned. “There are lots of caricatures about Christian Zionists not rooted in reality,” he noted. “Supporting Israel is not just about Israel. It is part of a larger principle about affirming the rights of all peoples to live together harmoniously.”

“If we keep a mature attitude in that way, it never has to in any way diminish our faith in the word of God or our support for Israel to make its decisions,” he concluded.

Explore our complete coverage of global news. Get The Stream’s top stories in our weekly update.