Ambassador David Friedman Will Now Serve All of Jerusalem 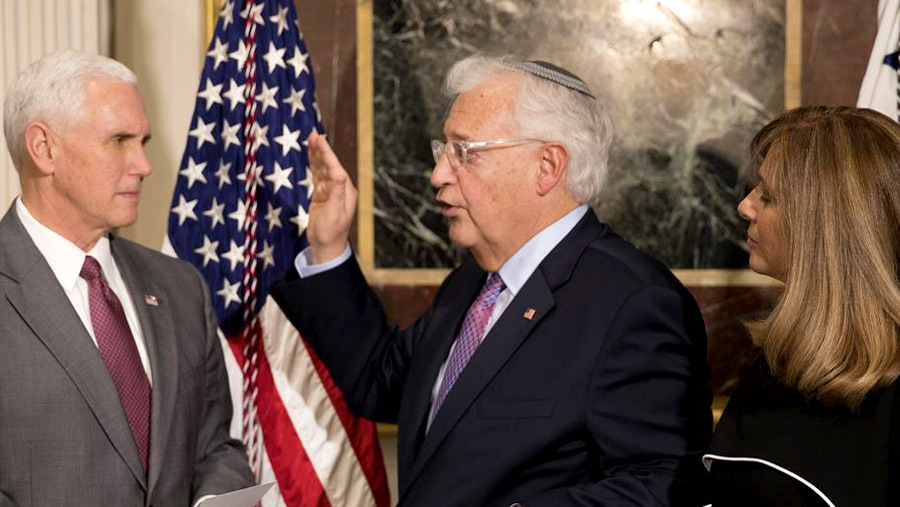 David M. Friedman is sworn in as United States Ambassador to Israel by Vice President Mike Pence in the Indian Treaty Room.

As a member of the Trump Faith Initiative, I cannot praise this president enough on the incredible steps he has taken not only in Israel, but for the entire Middle East. The merging of the two entities will give U.S. Ambassador to Israel David Friedman the ability to serve in all of Jerusalem. Friedman is the first United States Ambassador honored with the privilege to serve in Israel’s eternal and undivided capital.

Unknown to most, the United States Consulate in Jerusalem has a long-standing reputation of working against the State of Israel, as well as against the status quo. The U.S. Consulate is located in western Jerusalem. However, it serves Arabs who live in eastern Jerusalem and works directly under the U.S. State Department, instead of rightfully under the American Ambassador. It is the U.S. Ambassador, David Friedman, working directly under the president of the United States, who will ensure the continued strengthening of the U.S.-Israel relationship.

This major move will once again affirm Israel and the Jewish people’s connection to all of Jerusalem, a city that King David united and that has been the center of Jewish life for over 3,000 years. The merging of the two entities will also play an important role in the Trump administration’s Middle East peace plan. As Prime Minister Benjamin Netanyahu has stated again and again: “A peace that is built on lies will crash on the rocks of Middle Eastern reality.”

Thank you President Trump. You have once more recognized reality and made history in Jerusalem, the city of truth.

Mike Evans is a No. 1 New York Times best-selling author with 89 published books, including The New Iran. He is the founder of the Friends of Zion Museum in Jerusalem, of which Shimon Peres, Israel’s ninth president, was the chairman. He also serves on the Trump Evangelical Faith Initiative.