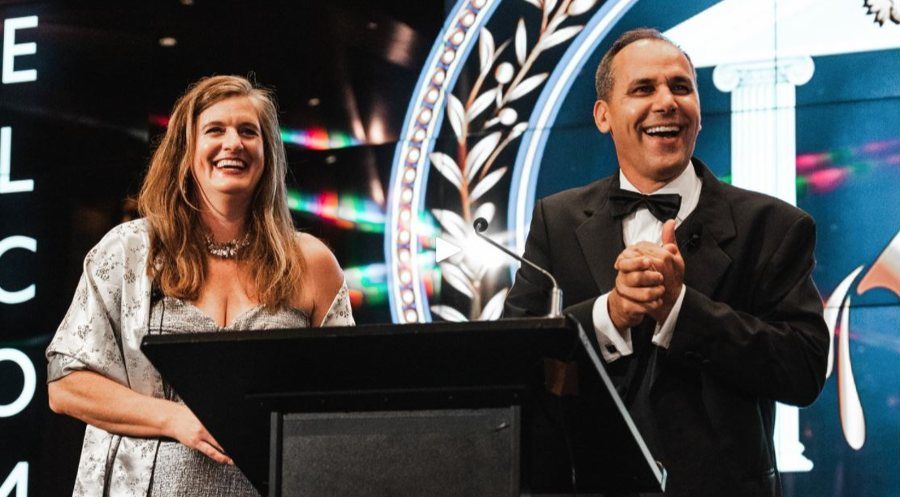 The woman sat in the ashes of the fire pit. She took ash and sticks and began writing names on the bricks that were around the fire pit. They were the names of people she needed to forgive. The woman was the spouse of a congressman, and had come to take part in the Alabaster House Capitol Spouses Retreat that focused on ministering to legislators and their spouses. As leaders from Alabaster House prayed over her, she began the healing process of forgiveness. “I didn’t walk away with a s’more,” the woman joked, but she did walk away with a lighter heart.

Stories like these are common with Alabaster House, founded by Randy and Kimberly Genau. Alabaster House is an organization that ministers to leaders in all three branches of government. Alabaster House’s mission is to “provide spiritual resources to government leaders in our nation’s capital through confidential prayer, biblical devotionals, and friendship.” Those three components are the pillars for the mission of Alabaster House, Kimberly told The Stream in a recent interview.

Now Alabaster House is hosting a “Shape the Nations” conference in Washington, D.C., featuring government, ministry and business leaders. It will take place Monday, April 25, through Wednesday, April 27. The conference starts with a “ministering to the influencers” dinner — for pastors, leaders and friends of the ministry. Tuesday will begin at Museum of the Bible with a conference featuring Steve Green. Workshop speakers will include Stacy Campbell, Ken Fish, Ken Sande, Gerard Long and others. Long’s speech will be on godly tools for coping with grief and suffering. “I think that’s a perfect timely workshop, especially coming out of the pandemic, that is really going to hit people right where they are,” said Kimberly.

In addition to the conference and the workshops, Alabaster House will host a formal gala, an exclusive equipping event, prayer for the members of Congress, and infinity luncheons specifically tailored to pastors/ministry leaders, business/entrepreneurs, Heart for Israel, Prayer for Revival and for the World.

“The work that we do with Alabaster House … it’s providing spiritual resources to government leaders and their families. And so, there are believers, there are fabulous Christians that are up there and who in fact believe it’s God’s call for them to serve in Washington.” Kimberly believes that message will be a catalyst to shaping the nation.

Following the conference, small groups will be sent out to conduct “prayer appointments” with Congress members and pray prayers of blessing over them.

We’re talking about the effective fervent prayers of the righteous availing much … you want to be really praying prayers God … please help equip, give wisdom to the government leaders that are there, especially those that believe it’s God’s call for them to be in government service. Those are the backing, the prayers of the saints that are going to move some of these individuals forward, to really implement some of the things that are on their heart that God’s given them to do. But I think prayers are an essential part of that.

People will not hear stories like this anywhere else, said Kimberly. Hope for America is what Alabaster House is about. “I know there are Christian organizations, but they primarily focus on Christian issues, let’s say, and maybe then lobbying.” This conference will not be doing any of that. “It’s almost like an insider view of what it’s like to serve in Congress and how we can come alongside through prayer.” While some may not know that serving in Congress is something they’re interested in doing, the conference will provide an opportunity for personal ministry for themselves. “And I think all of those are going to be powerful, too.”

For more information, and to register for the conference, please visit alabasterhouse.org.

Oh God, Rend the Heavens and Heal Our Crippled Churches and Dying Nation