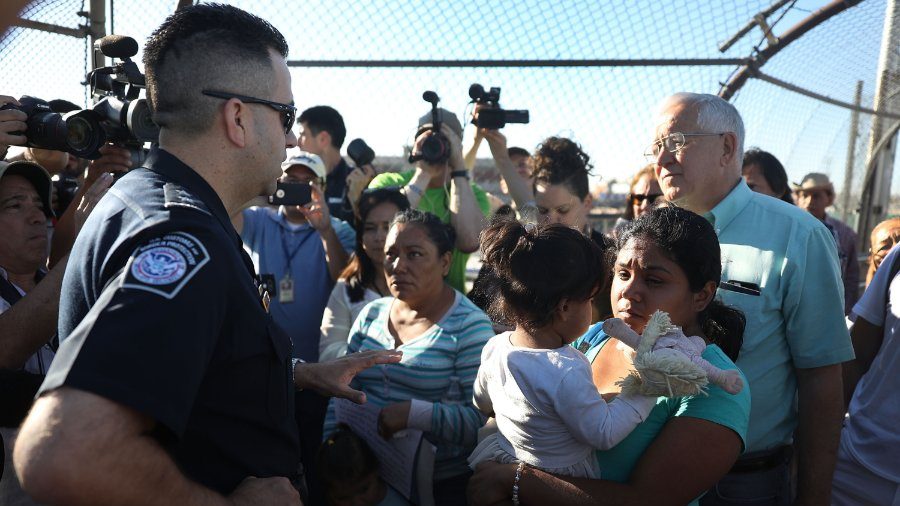 A U.S. Border Patrol agent informs two immigrants that they will have to wait at the top of the Paso Del Norte Port of Entry, where the U.S. and Mexico border meet, for space to open up at the border processing center so they can ask for asylum on June 20, 2018, in El Paso, Texas.

The Associated Press broke the good news just a few hours ago:

The Supreme Court is allowing nationwide enforcement of a new Trump administration rule that prevents most Central American immigrants from seeking asylum in the United States.

The justices’ order late Wednesday temporarily undoes a lower-court ruling that had blocked the new asylum policy in some states along the southern border. The policy is meant to deny asylum to anyone who passes through another country on the way to the U.S. without seeking protection there.

Most people crossing the southern border are Central Americans fleeing violence and poverty. They are largely ineligible under the new rule, as are asylum seekers from Africa, Asia and South America who arrive regularly at the southern border.

Open borders advocates had tried a long list of legal maneuvers to stop this common sense reform. They’ve shopped venues for friendlier courts, hoping for more nationwide injunctions by lawless activist judges. Now at last President Trump can address the most pressing source of invalid asylum claims. This could ease the pressure of dealing with families who show up with kids. No longer would ICE have to decide whether to separate them (in part to find out if the child they claim is really theirs, or a sex trafficking victim).

There might be fewer immigrant holding facilities for liberal congressmen and Hollywood actors to tour and feign shock at the living conditions. Also, we’ll see fewer transparently false asylum claimants disappearing into the country. Then ignoring their court dates. And bearing anchor babies that make them impossible to deport.

Of course, a reform that will outlast the Trump administration would require a change in the law. We need to write into statute the requirement that so-called asylum seekers really … seek asylum. Let’s be clear what that means, shall we?

The whole notion of offering asylum is predicated on a very simple principle: If your government is persecuting you, especially for your race or religion, our government will respond. We will shame that government publicly by taking you and treating you fairly. The U.S. hopes thereby to exert some pressure on that regime to stop its oppressive policies.

Asylum Is for Emergencies

Asylum means a safe place, away from immediate danger. We put mentally ill people in asylums only when they’re a threat to themselves or others. (And too often, not even then.) In the Middle Ages, churches could offer temporary asylum or sanctuary to criminals fleeing sheriffs. The notion was that the church was a place of mercy, not justice.

Now, of course, we have entire cities and states extending “sanctuary” to illegal immigrants. Even to violent felons whom the federal government wants to deport. The “Angel Moms” whom President Trump rightly brought to the forefront during his campaign saw their children suffer violence at the hands of illegal immigrants. Some of those criminals had never been arrested, but others were only here because of “sanctuary” policies. These amount to local or state governments denying the sovereign authority of the United States government, which alone has the constitutional duty to regulate immigration.

A Tool to Pressure Governments

Why is Trump’s policy the right one? Because the whole notion of offering asylum is predicated on a very simple principle: If your government is persecuting you, especially for your race or religion, our government will respond. We will shame that government publicly by taking you and treating you fairly. The U.S. hopes thereby to exert some pressure on that regime to stop its oppressive policies.

None of the asylum seekers from Central America have made plausible claims that their governments are persecuting them. That’s because it isn’t happening. Not even in Nicaragua, with its holdover Sandinistas, do people suffer state persecution. By the logic of the law, none of these people deserve asylum, then. Remember that asylum is not just a humanitarian gesture, but a tool for the U.S. to pressure a misbehaving government to shape up.

By international law, if you are being persecuted, you’re obliged to seek refuge in the “first safe country” where that isn’t happening. All of the Central American asylum claimants are passing through Mexico. No one claims that Mexico is systematically persecuting Central Americans. So every last one of those people should have claimed asylum in Mexico.

But they don’t want to live in Mexico, even when that government offers them jobs and housing. They want to come to the U.S., where wages are higher and the welfare system is generous. So they pass through Mexico and sneak into the U.S., often paying traffickers some $5,000-$9,000 for the privilege. Some “rent” available children, who’ll cross with them to help their asylum claim, then go back to Mexico and do the same thing again.

Then well-funded immigration lawyers working for Soros-funded non-profits or churches that profit from U.S. government contracts hand out little scripts. These scripts use just the right words to slip through the loopholes in badly written laws. Then the people go free and we never see them again.

Everyone at every level of the system knows how this scam works. It’s a shocking abuse of the noble concept of asylum and sanctuary. But those who advocate essentially open borders, who crave the votes or cheap labor of immigrants, play our sentiments like a fiddle. They pretend that people fleeing a higher crime rate, or lesser economic prospects, are akin to Jewish refugees from Hitler. Or Christian refugees from countries like Iraq and Syria, who rarely even make it to places willing to grant them asylum, anyway.

Asylum: Now a Back Door to Open Borders

Is the U.S. obliged to offer asylum to anyone who’s dissatisfied with the crime rate or economy of the country where he lives? Where does such an obligation come from? How far does it extend? Must we take the whole population of Africa, Pakistan, or other impoverished regions? Even if doing so harms the least-advantaged Americans? Even if a mass influx of low-skill workers flattens working-class wages for another 40 years? If the wave of people who never paid into our system bankrupts our poverty programs?

Just how close must we come to national self-destruction, before people agree that we’ve done enough?

I can’t answer these questions for everyone. Al Perrotta and I tried to suggest principles for thinking such things through in our book. But one thing is absolutely crystal clear: The venue for making such a decisions is democratic politics, the passage of laws and enactment of policies. It is flat out wrong to simply abuse and cheapen the notion of asylum, using it as a backdoor means to ignore the immigration policies legally set by our Congress.

Furthermore, tolerating the abuse of asylum encourages many evils. It signals to people in poor countries that they should uproot themselves. They should quit their jobs, sell their homes, and risk everything to make it to the U.S. border. Then take their meager savings and use it to pay the cartels that control our crossing. Then they should lie to U.S. officials, reading the “magic words” off scripts from immigration lawyers, pretending that they fled in fear for their lives. After that, they should make a false promise to appear at a court date to hear their claim. (A huge majority of such false claims get denied.) Meanwhile, they work illegally in often dangerous conditions, sometimes by using identity theft. (This can devastate the lives of the U.S. victims, by the way.)

How is encouraging such recklessness and criminality the Christian thing to do? Is it even minimally patriotic or just? How can so many of our religious leaders (such as U.S. Catholic bishops) collude in, and demand that we enable, all these evils?