Trump is in Da House: A State of the Union Preview 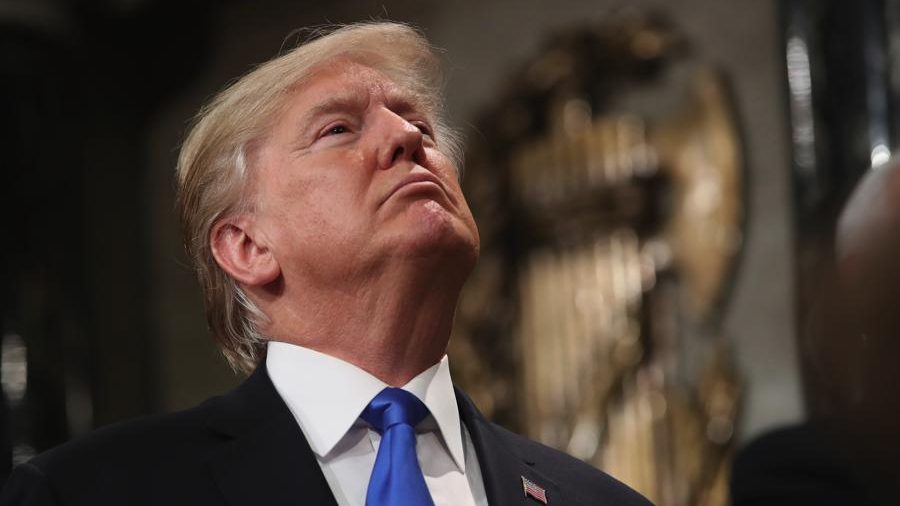 President Donald Trump pauses as he finishes his first State of the Union address in the House chamber of the U.S. Capitol to a joint session of Congress Tuesday, Jan. 30, 2018 in Washington.

President Trump is planning to preach unity and compromise tonight … in a town where people are lining up to throw stuff at a replica of his daughter Ivanka.

He will recount all the things that are going right in America … in front of a chamber that includes members who make their bones badmouthing America.

He will express why we need barriers to protect our border … to people who think having a border is a barrier to a new global order.

He will lay out where he wants to take the country … to people who would just as soon have him taken out.

He will speak of protecting our unborn … to people who, as Jason Chaffetz so brilliant put it, are more interested in banning straws than saving infants.

On the plus side, we can be reasonably sure President Trump will keep his shirt on and won’t “move like Jagger.” Yes, regardless of what happens, the former NBC reality star will still have a better night than current NBC reality star Adam Levine did at the Super Bowl.

Playing to a Hostile Crowd

Can we really expect newly elected radicals like Alexandria Ocasio-Cortez and Ilhan Omar to be respectful? Shouldn’t we expect some form of demonstration from Maxine Waters, et al., say “taking a knee” during the speech? After all, staring in stone-cold silence as Trump touted the employment gains for minorities didn’t play all that well last year.

And even if the “Impeach Him For Breathing” crowd does manage to hold onto some semblance of decorum, there’s no way their guests will. Just think back to the Kavanaugh hearings. Who was interrupting them? Guests of Senate Judicial Committee Democrats.

Who is Ocasio-Cortez bringing as a guest? The illegal immigrant who accosted and yelled and screamed at feckless Sen. Jeff Flake before the Judiciary Committee’s Kavanaugh vote to the point he reversed his vote. You think Ana Maria Archila is going to treat the House chamber any better than a Senate elevator?

Archila is just one of the guests Democrats are bringing to troll President Trump. (As if you are going to out-troll the guy who brought Bill Clinton’s sexual assault victims to his second debate with Hillary Clinton.)

Meanwhile, Trump will have to spend the whole speech with Nancy Pelosi shooting visual daggers into his back. A bit like delivering your book report to a class whose teacher is still mad at you for plastering funny memes with her picture all over the cafeteria.

Yes, at one of the most monumental events of his presidency, Trump will be walking into a hostile environment where anything can happen. However, he walks into the area with several advantages.

Trump loves this stuff. The big event. The pressure situation. Think again of that second Hillary debate. By all accounts he was done. The Access Hollywood tape had just come out. His campaign was toast. Over. Done. The party was racing away from Trump like he was an IED. The audience greeted him with the warmth of a polar vortex. Had he a dog even Fido would have fled him. Hillary and her media allies were set for the kill. Instead, he killed it. He won the debate.

He’s a president with the heart of a showman and the spine of Tom Brady.

Trump again will offer olive branches. He will speak of Cooperation. Comity. Compromise. You know, the material our system is supposed to be made of. When he is jeered, when the accomplishments of the past two years are not cheered, Trump will look like the moderate one. The reasonable one.

Newsflash to the MSM and radicals who own the Democrats: Most Americans are moderate and reasonable. Nutjobs make us nervous. Crazy clowns who scream at people in elevators … or bang drums in the face of teenagers … or think a scared kid “smirking” equals white supremacy … or dream of eliminating all private insurance …. or eliminating ICE … or protecting MS-13 murderers … or making a baby “comfortable” before deciding to kill it … or deciding those children are not, in fact, legally human, until they are out of the womb … or breaking out into loud cheers over a law allowing babies to be sliced and diced through the third trimester for any whim of a reason …

When The Big Orange — the reality show star with the three wives, golden fixtures, own water brand and wicked tweeting habit — is the moderate and reasonable one in the room, the Democrats are ceding the entire middle ground to Republicans. Trump becomes the wall between Americans and borderline insanity.

Finally, Trump gets to deliver a State of the Union message chock full of good things his administration has done to benefit the lives of everyday Americans, along with the wealth and security of our nation. Here’s a list of 70 improvements Trump has made while in office.

One I want to point to is the First Step Act. The first person granted clemency under Trump’s criminal-justice reform is Matthew Charles. He had been given 35 years for drug-related offenses. But while in prison he found God, taught GED classes and became a law clerk. Freed under the First Step Act, Mr. Charles will be a guest of the President tonight.

Why is this so meaningful? In the wake of the Charlottesville riots, the question hung like smoke in the air: “How can we achieve racial reconciliation?” President Trump was determined to know. Bishop Harry Jackson was among those who told the President that one fundamental key to racial reconciliation would be criminal-justice reform.

So on one level, the First Step Act is about giving individuals a second chance.

Yet on another level, it’s about giving our nation another chance to reconcile.

And in a week when Ohio’s Democratic Senator calls Trump a “racist” on national TV even as Virginia’s Democratic governor is forced to explain a black face and KKK photo in his yearbook, Mr. Charles is a reminder of this different path. One that works across racial lines and party lines, a genuine reform that leads to genuine reconciliation.

President Trump will tell us The State of the Union is strong. And Mr. Charles will show us there is hope for the State of Our Unity.

We pray for that unity, we pray for the safety of all attending, and we pray God’s wisdom will speak through President Trump and God will continue to bless the United States of America. The President’s State of the Union address begins at 9 p.m. Eastern.

The Stillness at the State of the Union