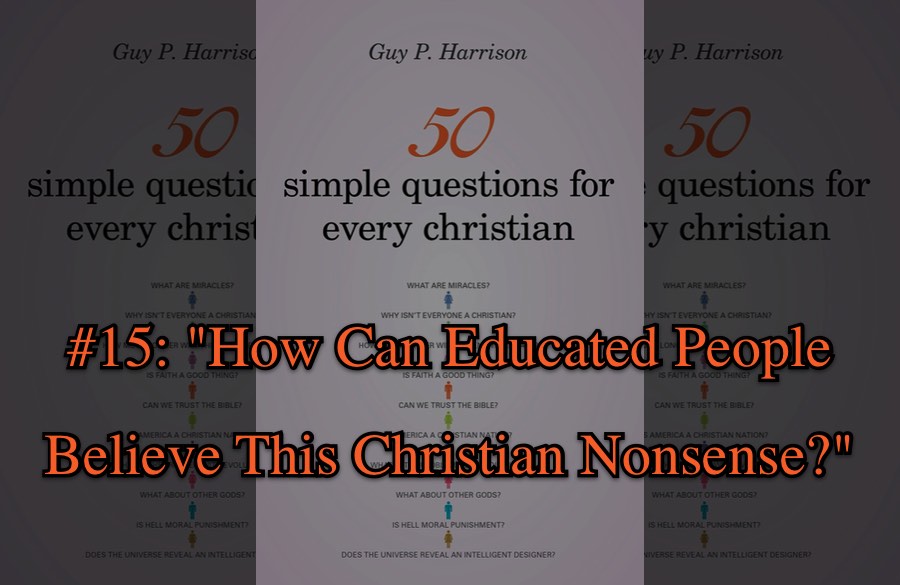 I’ve taken to re-asking some of Guy Harrison’s questions the way he really meant them. The chapter I’m responding to here is titled “Is It Smarter to Believe or Not Believe?” The way he works it out, though, it comes more like the headline above: “How can educated people believe this nonsense?”

It’s supposed to be 50 questions for Christians, but atheist Harrison just can’t help answering his question himself. Some of us are “silly,” others under-educated. Most of us have little awareness of the world around us, and the more intelligent a Christian is, the more likely he’s stuffing his beliefs blindly into a separate compartment of his brain.

Give Harrison credit for trying to come off as even-handed. He admits that a lot of really smart people believe in Jesus. Isaac Newton, for one, was “intensely Christian,” he says, apparently unaware that Newton’s intense religion was unorthodox. I wish we could claim him, mostly for the sake of his own eternal life, but we can’t.

Also to his credit, Harrison names a small portion of the long list of other scientists who have believed. And he doesn’t think there’s a strong negative correlation between religion and intelligence. Good for him.

Something Foolish Going On Here

Many nonbelievers struggle to understand how someone can be intellectually vibrant and accomplished while holding onto ideas that nonbelievers consider to be transparently wrong. I think the answer to much of this is probably compartmentalization — something many of us do to avoid the discomfort of cognitive dissonance. … I think this is why so many thoughtful and sensible religious people are able to hold onto and defend unproven, extraordinary claims without flinching.

It’s odd he would bring that up. I could turn that around and say exactly the same thing about atheism, and make a good case for it. Most unbelievers today are materialist atheists; that is, they take it that nothing exists but matter and energy interacting according to laws of nature. That’s all there is: There’s mindless stuff, and it does what mindless stuff does. It can’t do anything else; stuff doesn’t have any power to do anything else, and natural law (whatever that is) can’t either.

Faith in Stuff Is the Real Foolishness

That’s a very strange view of reality. It takes it on faith that stuff can create itself. From nothing. Absolute nothing, that is. None of this nonsense some atheists peddle about stuff making itself up from quantum vacuums and the laws of physics. That’s not nothing! It would have had to create itself, in order to be there to create the other stuff.

Either that, or else stuff has existed forever since eternity past. And that’s a problem, too, because even though it’s been running forever — and we know stuff can’t run forever — somehow in all those eternal eons it hasn’t run down yet. You know, the way the 2nd Law of Thermodynamics predicts it must?

Not only that, but this view takes it that when stuff takes form in humans it can think, and that it has identity, consciousness, rationality, free will, meaning, and purpose. It’s that, or else human consciousness and free will are illusions, and I won’t even get into the problems raised by stuff having rationality or identity.

This is a mainstream atheist philosophical position, mind you, this illusion theory (for consciousness and free will, especially) . A lot of atheist thinkers say it must be true, since we’re just stuff, and stuff isn’t conscious and can’t make choices. Now, if they were right about the stuff part, they’d be right about the rest. But isn’t it more than a little strange of them to hold a view of reality that says our most universal data point — human consciousness, and the choices we make — has to be tossed out as so many trillions of instances of noise?

This strange worldview has problems, too, explaining rationally how stuff can explain anything rationally. And that’s just the start of its problems.

But Harrison still wonders about religious believers. We’ve got problems we’ve never faced, says he. We’re too “immersed” in our “just one religion out of many thousands,” so we don’t even realize how many thousands of gods the world has created. (As if anyone could have failed to notice.) “That realization alone,” says Harrison, can be “jarring for some believers … who assume their religion is significantly different and special compared with all the others.”

But let’s see how jarring this realization really is, and to whom. Is Christianity different? Is it special compared with the others? Oh, just let me count the ways! No other world religion:

I could go on with the counting, but all I really wanted to do was to show that Christianity really does differ from the rest. If Harrison still thinks all religions are basically alike, he might find the reality jarring — if he hasn’t compartmentalized his brain too badly.

Christianity is Intelligent, But Thank God There’s No Intelligence Test

I can tire quickly of these games, though. Do smart people believe? Are atheists better educated than Christians? Questions like these miss the point, treating it as if rationality was the only issue. It isn’t. There’s also humility versus pride. There’s willingness to repent, and willingness to worship.

And besides, there is no intelligence test for the Kingdom of God. Heaven isn’t going to look like a university faculty lounge. And even my Christian professor friends tell me they thank God for that!