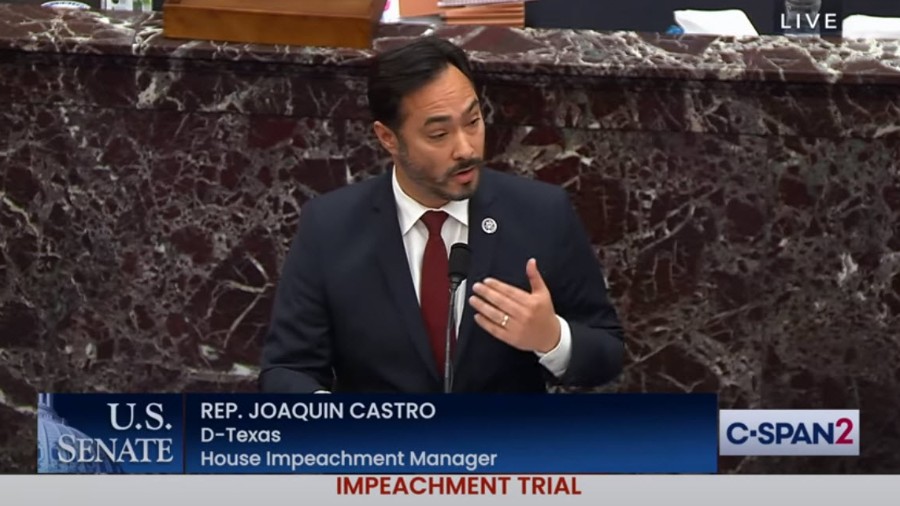 In a second full day of making their case for disqualifying Donald Trump from running again for president, House Democrats reminded the Senate of the Charlottesville riot in 2017 and a plot last year to kidnap Michigan’s governor.

The nine House impeachment managers, or prosecutors, kept most of the focus Thursday on a mob’s Jan. 6 attack on the Capitol, but also brought up some of Trump’s comments as a candidate for president in 2015.

The House impeached Trump on a single charge of incitement to insurrection, and Democrats sought to establish a pattern of incitement to convince senators to convict the 45th president and disqualify him from holding a future federal office.

House impeachment managers also said more than once that the cost of beefed-up, militarized security for the Capitol is expected to cost taxpayers $480 million through mid-March. The Democrats argued that the presence of National Guard troops and perimeter fencing was a result of the riot they allege Trump incited.

It would take the votes of 67 senators, or a two-thirds majority, to convict Trump. If Democrats reached that threshold, it would take only a simple majority vote to disqualify Trump from holding federal office again.

The prosecution and the defense each have up to 16 hours to make their case at the Senate impeachment trial, for which Sen. Patrick Leahy, D-Vt., not a federal judge, is presiding.

The House prosecution team wrapped up before 4:30 p.m. with about five hours left. Trump’s lawyers are set to begin making their case Friday, and reportedly will spend only that one day making their case.

Here are key highlights from the third day of Trump’s historic second impeachment trial, which also is the first such trial of a former president.

China, Russia, and Iran seized on the riot at the Capitol to mock America’s commitment to democracy and human rights, Rep. Joaquin Castro, D-Texas, told senators, directing their attention to large screens showing quotes from officials of foreign governments.

“What message will we send the rest of the world? We already know the message some of our adversaries took from Jan. 6,” Castro said.

After reading off several examples of talking points from America’s enemies, he said: “We cannot let them use what happened on Jan. 6 to define us, who we are and what we stand for.”

U.S. intelligence agencies are working to determine how many intelligence documents may have been stolen as rioters stormed the building, some leaving with laptops and documents stolen from members of Congress who are privy to classified information, Castro said.

The attack also demonstrated to terrorists that federal buildings are vulnerable, he argued.

“We have spent trillions of dollars building the strongest military in the world, and billions of dollars on the most sophisticated weaponry on the planet, to prevent the kind of attack that occurred at this Capitol on Jan. 6,” Castro said.

Rep. Jamie Raskin, D-Md., leader of the impeachment managers, called the mob’s attack on the Capitol the “culmination of the president’s actions.”

“The insurrection was the most violent and dangerous episode so far in Donald Trump’s continuing pattern and practice of inciting violence, but I emphasize so far,” Raskin said.

A mob began breaking into the Capitol while Trump continued to address supporters in a rally just south of the White House, using the word “fight” as Congress was meeting in joint session to certify what Trump called a “stolen” election.

The Maryland Democrat said Trump has stirred supporters to violence in the past with a “wink and nod,” not a direct order, he argued.

Raskin added: “If you don’t find this a high crime and misdemeanor today, you have set a new, terrible standard for presidential misconduct in the United States of America.”

The outcome of the riot and breach of the Capitol could have been far worse, as some in the mob openly talked of killing House Speaker Nancy Pelosi, then-Vice President Mike Pence, and other members of Congress, Rep. David Cicilline, D-R.I., argued.

“What if President Trump had been successful? What if he had succeeded in overturning the will of the people and our constitutional processes?” Cicilline said. “Who among us is willing to risk that outcome by letting Trump’s constitutional crimes go unanswered?”

Rep. Diana DeGette, D-Colo., delivered a presentation that included video of violence during the 2017 riot in Charlottesville, Virginia, in which white nationalists clashed with the leftist extremist group Antifa.

“I’d argue we’re not just back where we were,” DeGette told senators. “I would argue things are worse. In 2017, it was unfathomable to most of us to think that Charlottesville could happen.”

Cicilline said many of the Capitol rioters apparently were white nationalists who carried Confederate flags and harassed black police officers and janitorial staff with racial epithets.

“And then after all that, these same workers, many of them people of color, were forced to clean up the mess left by mobs of white nationalists,” Cicilline said, adding:

One member of the janitorial staff reflected how terrible he felt when he had to clean up feces that had been smeared on the wall, blood of a rioter who had died, broken glass, and other objects strewn all over the floor. He said, ‘I felt bad. I felt degraded.’

DeGette showed images of rioters on large screens and asked rhetorically, “Looking at these people makes you wonder: Who sent them here?”

She answered her own question: “Donald Trump had sent them there.”

DeGette and other House impeachment managers replayed numerous videos in which rioters claimed they were fighting for Trump and that Trump sent them.

At one point, the screens displayed an image of a lawyer for one of the rioters who claimed his client believed he was following the advice of the president.

Their own statements before, during, and after the attack make clear the attack was done for Donald Trump, at his instructions and to fulfill his wishes. All of these people who have been arrested and charged, they’re being held accountable for their actions. Their leader, the man who incited them, must be held accountable as well.

Rep. Ted Lieu, D-Calif., argued that the Senate must act to ensure no future federal official does the same thing Trump did.

“Impeachment, conviction, and disqualification is not just about the past, it’s about the future,” Lieu said. “It’s making sure that no future official, no future president, does the same exact thing that President Trump does. President Trump’s lack of remorse shows that he will undoubtedly cause future harm if allowed.”

The California Democrat added that it took Trump three days to lower the flag over the White House following the death of a Capitol Police officer who died that night after defending the building.

“President Trump, who was commander in chief at the time, did not attend and pay respects to the officer who lay in state in the very building he died defending,” Lieu said.