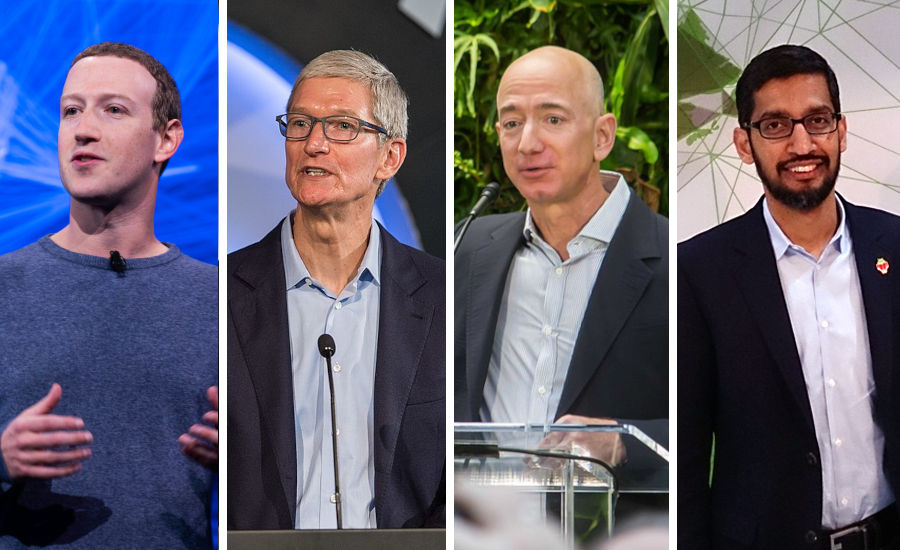 Mark Zuckerberg of Facebook, Tim Cook of Apple, Jeff Bezos of Amazon, and Sundar Pichai of Google testified via the internet on free speech concerns before the House Judiciary Committee’s subcommittee on antitrust, commercial and administrative law.

Republicans and Democrats hammered Big Tech CEOs during a House hearing Wednesday, although for different reasons.

Mark Zuckerberg of Facebook, Tim Cook of Apple, Jeff Bezos of Amazon, and Sundar Pichai of Google testified via the internet on free speech concerns before the House Judiciary Committee’s subcommittee on antitrust, commercial and administrative law.

“Prior to the COVID-19 pandemic, these corporations already stood out as titans in our economy. In the wake of COVID-19 … they’re likely to emerge stronger and more powerful than ever before,” subcommittee Chairman David Cicilline, D-R.I., said.

Here are four key highlights of the hearing.

1. ‘Out to Get Conservatives’

Rep. Jim Jordan, R-Ohio, opened his comments by saying, “I’ll cut to the chase: Big Tech is out to get conservatives.”

Jordan noted that in 2020, Google removed the home pages of Breitbart and The Daily Caller and threatened to demonetize The Federalist.

Amazon banned a conservative commentator’s book on the coronavirus, Jordan said. Its Amazon Smile charity won’t allow customers to give to conservative groups such as Family Research Council and the Alliance Defending Freedom, but allows donations to Planned Parenthood, he said.

The Ohio Republican said such moves by Big Tech companies matter before the November elections:

The power these companies have to impact what could happen in an election, what American citizens get to see prior to their voting, is pretty darn important. We all think the free market is great. We all think competition is great. We love the fact that these are American companies. What’s not great is censoring people, censoring conservatives, and trying to impact elections. If it doesn’t end, there has to be consequences.

Jordan asked Pichai, CEO of Alphabet Inc. and subsidiary Google LLC, whether Google would commit to trying not to tilt the election to Democrats. Pichai seemed slow to respond.

Jordan said: “It was a yes or no question.”

Pichai responded: “We support work that campaigns do.”

“I understand that,” he said, adding: “Can you today assure Americans you won’t tailor your features to help, specifically help, any candidate over another?”

Finally, Pichai said: “We won’t do any work to politically tilt anything one way or the other. It’s against our core values.”

After Jordan’s exchange with the Google executive, Rep. Mary Gay Scanlon, D-Pa., said: “Thank you, gentlemen. I’d like to redirect your attention to antitrust law rather than fringe conspiracy theories.”

Jordan jumped to defend himself. But Cicilline, using his power as chairman, said: “Mr. Jordan, you do not have the time. Please be respectful of your colleagues.”

“When someone comes after my motives for asking a question,” Jordan said, “I get a chance to respond.”

But Cicilline didn’t allow that.

The counsel told her no, Jayapal said. However, on Wednesday, Bezos gave a different response than the company lawyer to the same question, she said.

“In July 2019, your employee Nate Sutton told me under oath in this committee that Amazon does not, quote, ‘use any specific seller data when creating its own private brand product,’” Jayapal said. “So, let me ask you, Mr. Bezos, does Amazon access and use third-party seller data when making business decisions? And just a yes or no will suffice, sir.”

“I can’t answer that question yes or no,” the Amazon CEO said. “What I can tell you is that we have a policy against using seller-specific data to aid our private label business. But, I can’t guarantee you that that policy has never been violated.”

“Mr. Bezos, you’re probably aware that an April 2020 report in The Wall Street Journal revealed that your company does access data on third-party sellers, both by reviewing data on popular individual sellers and products and by creating tiny product categories that allowed your company to categorically access detailed seller information in a supposedly aggregate category,” Jayapal said. “Do you deny that report?”

Bezos, also the owner of The Washington Post, seemed to question the Journal’s report on his company because of the use of anonymous sources.

“I’m familiar with The Wall Street Journal article you’re talking about. We continue to look into that very carefully,” Bezos said. “We’re not yet satisfied that we’ve gotten to the bottom of it. We’re going to keep looking at it. It’s not as easy as you would think, because some of the sources in the article are anonymous. But we continue to look into it.”

Jayapal replied: “I take that as you’re not denying that. You’re looking into it.”

Rep. James Sensenbrenner, R-Wis., ranking member of the subcommittee, pressed Zuckerberg on Facebook’s threshold for taking down content. He cited Twitter’s suspension of Donald Trump Jr. for posting about drugs to treat COVID-19.

“Exactly what are your standards in, quote, ‘filtering out political speech’ that maybe some people out there don’t agree with?” Sensenbrenner asked.

Zuckerberg said the goal is to “offer a platform for all ideas,” adding:

Frankly, I think we’ve distinguished ourselves as one of the companies that defends free expression the most. We do have community standards around things that you can and cannot say. I think you would likely agree with most of them. They ban categories of harm such as promoting terrorist propaganda, child exploitation, incitement of violence, some more legalistic things like intellectual property violations. They also ban things like hate speech that could lead to dehumanizing people and encouraging violence down the road.

“Stating there is a proven cure for COVID, when there is in fact none, might encourage someone to go take something that could have an adverse effect,” Zuckerberg said. “So, we do take that down. We do not prohibit discussion around trials of drugs, or people saying that they think that things might work.”

Sensenbrenner pushed back, stating that such opinions should be open for debate or fact-checkers to probe.

“In general, I agree with you,” Zuckerberg said. “We do not want to become arbiters of truth. That would be a bad position for us to be in and not what we should be doing. But, on specific claims, if someone is going to go out and say that hydroxychloroquine is proven to cure COVID, when in fact it has not been proven to cure COVID, and that statement could lead people to, in some cases it could be harmful to people, we should take that down. That could cause imminent risk of harm.”

Cook, CEO of Apple, stressed that his company is not a monopoly. He later brought up Huawei Technologies Co. Ltd., among other competing companies, as having an approach that he is OK with.

Huawei is a Chinese government-run company that has been accused of unfair competitive practices.

“If you want to put it simply, products like iPhone just work,” Cook said. “When customers consistently give iPhone a 99% satisfaction rating, that’s the message they’re sending about the user experience.”

He then listed competitors, including Huawei.

“But we also know that customers have a lot of choices and that our products face fierce competition,” Cook said. “Companies like Samsung, LG, Huawei, and Google have built successful businesses with different approaches. We’re OK with that. Our goal is the best, not the most. In fact, we don’t have a dominant share in any market or any product category where we do business.”