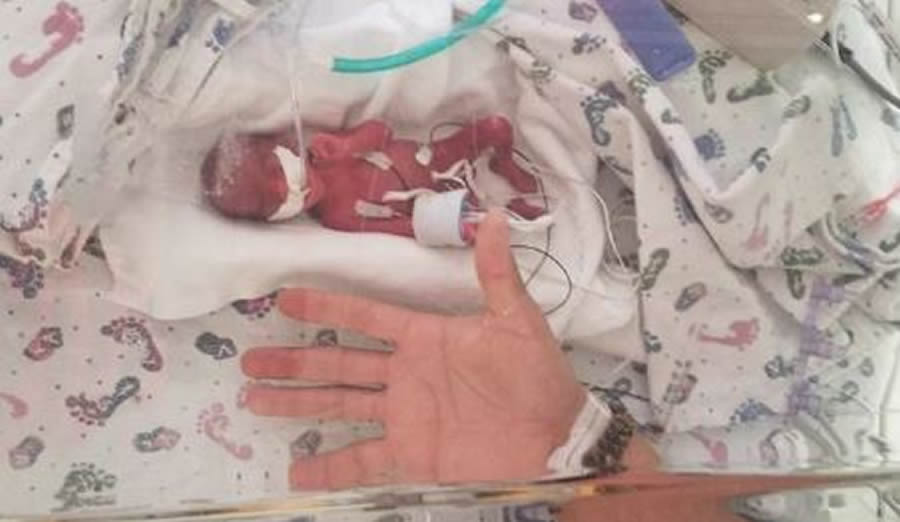 An Iowa mother gave birth after only 23 weeks to a 13-ounce baby the size of an adult’s hand.

Doctors told Ellonn Smartt when she went into labor that her baby might not survive long after the birth, according to ABC News. But her son was born at 10:44 a.m. on July 11 at Blank Children’s Hospital in Des Moines, according to the family’s CaringBridge page.

Smartt said she was terrified when she found out she was going into early labor.

“I started bawling my eyes out,” the 25-year-old mother told ABC News on Tuesday. “I had dreamt of a perfect pregnancy and I thought everything was going great. All my appointments were fine, I was healthy, I ate right.”

Doctors performed an emergency cesarean section, and Jaden Wesley Morrow was born weighing in at less than a pound. Newborn babies normally weigh around 7.5 pounds on average, or between 5.5 and 10 pounds.

The baby is recovering in the neonatal intensive care unit at Blank Children’s Hospital.

“All I could see was his hat,” Smartt said, describing seeing her son before he was rushed off to the NICU. “His hat was huge on him, but I thought, ‘Ok, that’s my baby.’”

Smartt expects to take Jaden home in November, around the time of the baby’s original due date. Blank Children’s Hospital declined to comment on when Jaden will be released from the hospital but directed the Daily Caller News Foundation to the child’s CaringBridge page.

“[The doctors] are kind of going day by day. They’re pretty much saying he looks really great,” Jaden’s mother told ABC News, “and, like I said, they’re going day by day but so far he’s looking great.”

“Weighing in at a whopping 13 ounces, I’m already wowing the Doctors,” reads the CaringBridge page. “I’ve heard them use terms like ‘amazing’ and ‘remarkable’ to describe me so far — not bad for someone under 1 pound, huh? My parents and my grandma are going to use this site to let you know how I’m coming along in the NICU.”

Twenty-three weeks comes within a woman’s second trimester, which falls into the range of a “dilation and evacuation” abortion procedure where legal, according to UCLA Obstetrics and Gynecology.

Beauty Out of Ashes: How One Mom’s Loss Propelled Her to Help the Medically Vulnerable Through Simon’s Law