12 Mighty Orphans, a Film About a Legendary Football Coach and the Orphans He Trained, Opens in Theaters in Time for Father’s Day

Luke Wilson, Martin Sheen and Robert Duvall are just a few of the big names in the film. 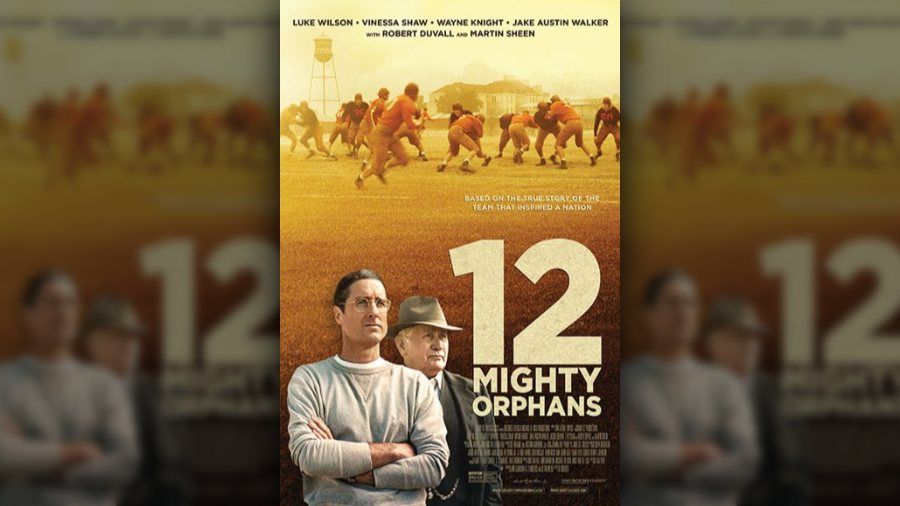 Sony Pictures Classics is releasing a new movie about 12 scrappy orphans who knew little about football, but went on to play in the state championship game, thanks to Texas legendary football coach Rusty Russell.

12 Mighty Orphans, based on a true story, shows how the coach helped the orphans compete in a football league during the Depression and provided a father-type figure in the absence of their parents. The movie stars Luke Wilson, Martin Sheen and Robert Duvall among others. It will be in theaters in Texas beginning Friday and nationwide beginning June 18, 2021.

Capturing the Flavor of the Area

Nine of the 12 young actors cast as the football players came from the Fort Worth area, where the film was shot. Several had never acted. “I really wanted to capture the flavor of the Texas culture,” director and co-screenwriter of 12 Mighty Orphans, Ty Roberts, told The Stream, “and I knew casting out of LA would not do that.” He believes he succeeded. “I was ultra-proud of the guys who had never acted before and had just really remarkable roles. They really captured the flavor of the area.”

12 Mighty Orphans follows the story of real-life football coach and teacher Russell (played by Luke Wilson) as he arrived at the orphanage with his wife (Vinessa Shaw as Juanita Russell) and child. He found shoe-less boys who didn’t have hope for adoption, or much of anything. “I just, I love the fact that you had this coach-teacher-mentor, who was so selfless in so many ways,” said Roberts. “He left a prominent high school here in Texas that was contender for a state championship. He left it all to go to an orphanage that literally had nothing. That symbolized the type of man that I’d love to be.”

The teenage orphans were small and untrained, but through Russell’s coaching went on to form a football team — the “Mighty Mites” — and eventually win their way to compete in the state championship.

Much More Than Football

But the movie is about much more than football, said co-screenwriter Lane Garrison. Garrison and Roberts knew they didn’t want to make just another football movie. “Football would be the vehicle, the tool that Rusty used. But this was about these boys and this man overcoming adversity and great obstacles,” said Garrison. Russell became a father figure to the boys who didn’t have parents. Although he was strict when the boys misbehaved, he was loving, protective and caring when they needed it most.

“I hope folks walk out of the theater with a little pep in their step,” said Roberts. He wants the audience to feel inspired to face their own challenges or tackle their wildest dreams. “And if those are already realized, perhaps they will help others — especially the kids — come to understand their potential and their ability to pursue their dreams. Because with perseverance and heart, anything is possible.”

Note to parents: This film is PG-13 for violence and some coarse language.

God Will Have the Last Laugh