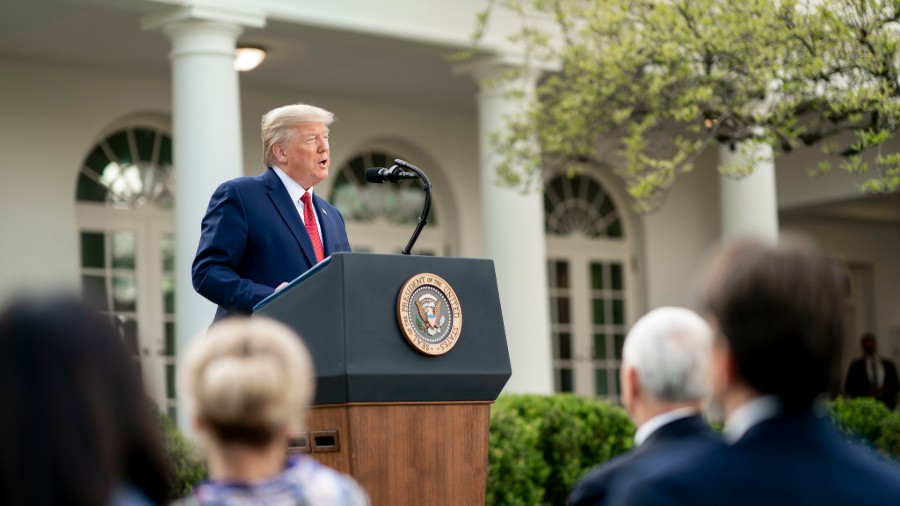 A total of 1 million tests for the coronavirus now have been administered, President Donald Trump announced Monday evening during a Rose Garden press conference.

On a table outside the White House, Trump demonstrated two COVID-19 tests that can be completed within five to 15 minutes.

“Today we reached a historic milestone in our war against the coronavirus. Over 1 million Americans have now been tested, more than any other country by far. Not even close, and tested accurately,” Trump said.

The news comes a day after Trump announced that social distancing and sanitary guidelines that originally were set to lapse today would be extended until April 30 and that the government expects U.S. deaths from the contagious disease to peak in two weeks before declining.

“By very vigorously following these guidelines, we could save more than 1 million American lives,” Trump said Monday. “Our future is in our own hands, and the choices and sacrifices we make will determine the fate of this virus and, really, the fate of our victory.”

“We will have a great victory,” he added. “We have no other choice. Every one of us has a role to play in winning this war.”

According to the Centers for Disease Control and Prevention, the U.S. has 140,904 confirmed cases of COVID-19 and 2,405 total deaths.

Health and Human Services Secretary Alex Azar thanked the “many American companies, entrepreneurs, and scientists” who made the boost in testing possible.

“We are now testing nearly 100,000 samples a day, also a level that no other country has reached,” Azar said.

Lindell went on to read remarks that he said he wrote “off the cuff,” lauding Trump’s leadership and calling for the country to use this time of crisis to return to God.

“God had been taken out of our schools and lives. A nation had turned its back on God,” Lindell said. “I encourage you, use this time at home to get back in the word. Read our Bibles and spend time with our families.”

“What do you say to Americans who are upset with you over the way you downplayed this crisis over the last couple of months?” Acosta asked, then read a series of Trump quotes from February and early March suggesting that the coronavirus was under control.

Trump said the statements were true and that Acosta was trying to cause panic.

It’s people like you and CNN that say things like that, it’s why people just don’t want to listen to CNN. You could ask a normal question. The statements I made are that I want to keep the country calm. I don’t want panic in the country. I could cause panic, much better than even you. It would make you look like a minor league player.

But you know what, I don’t want to do that. I want to have our country be calm and strong and fight and win. And it will go away. And it is incredible the job that all of these people … are doing. I am very proud of the job they’re doing. …

It’s almost a miracle, and it is, the way it has all come together. Instead of asking a nasty, snarky question like that, you should ask a real question.