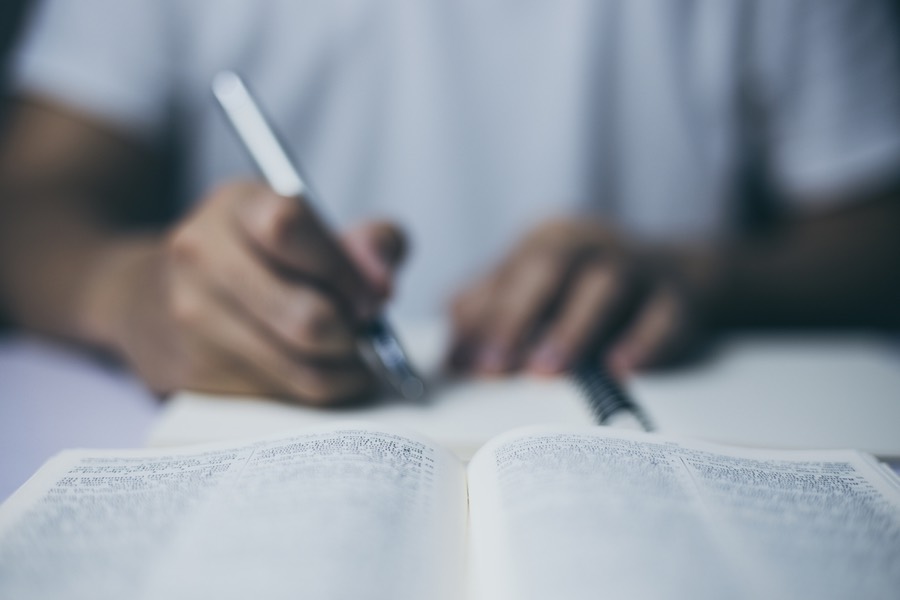 A friend asked the other night at Bible study: “Why is it so hard to understand the Bible? Why didn’t God make it simpler?”

It’s a great question, and she asked it with the right idea in mind — unlike some atheists I’ve encountered, who’ve challenged me, saying, “If God were real, he sure could’ve done a better job of explaining things.”

I tell these atheists it’s because life isn’t simple, so why would we expect a true revelation of life to be simple? Why would we expect it to be easy to understand the Creator of the universe? A simple Bible could never really reflect reality; it would necessarily be a distorted Bible.

Yet there’s something I like about that atheist version of the question. It points straight at the problem. Sure, the Bible could have done a better job of explaining things, if that’s all the Bible was for.

I’ve got books that explain things clearly, concisely, possibly even accurately. Some of them are theology books that lay out what we know about the nature of God, about sin, salvation, and much more. They’ve got it sorted out, categorized, summarized, and clarified. And I for one am grateful for it. Their authors did a lot of the hard work of understanding for the rest of us.

Yet I still go to the Bible, even though some answers are easier to pull from other sources. I do it because it isn’t only about answers and explanations. It’s about encountering God Himself.

We see Him most clearly in Jesus, God in the flesh, the one perfect human life that ever lived. His teaching is incomparable, and not only for the truths He conveyed. Try putting yourself in the scene when He said, ““Do not think that I have come to abolish the Law or the Prophets; I have not come to abolish them but to fulfill them.” (Matt. 5:17)

If that doesn’t strike you as astonishing, then you might be too used to it; maybe even too used to Jesus Himself. Think of it this way: The guest preacher at church next Sunday opens up with a few words of encouragement. Then he says, “Do not think I’ve come here this morning to abolish the Bible; I have not come to abolish it but to fulfill it.” The gall of it! Even to suggest that anyone might think he could abolish the Bible!? And then saying he’d come fulfill it himself instead? We’re talking blasphemy here. You’d throw him out before he spoke another word.

Now imagine following a Man who’d said that, and discovering that was exactly what He was doing: fulfilling the Scripture! Imagine being with One whose entire life, without exception, was focused on giving to others in love, even to the point of death. Or picture yourself with One who always spoke truth in the face of opposition, always ascendant, never descending to pettiness, yet never walking away saying, “I hope I get another shot at that; I could have said it better than I did.”

You and I have never met anyone like that except in the Gospels. There’s more there than just information. There’s an encounter with life, love, and truth, such as you’ll never meet with anywhere else.

Sweating the Word to Meet with the Lord

As for the Old Testament and the rest of the New, sure, some of it’s hard. I taught a couple of the harder passages from Hebrews at church last week, and even though I sweated over it, there was one point where I had to admit, “I still don’t know what this word means in this context.”

But there’s life even in the sweat. I can breeze by the easy passages if all I want is to know what the words mean. The tougher ones challenge me. Some of them worry me; some of them even disturb me. But my assumption is never, “There’s something wrong with the Bible here.” It’s always, “I don’t have this right,” or even, “I’m not right” — as in, “If this is what it means to fully follow Christ, then I’ve still got a lot of growing to do.”

And I’m pretty sure that if it were easier — if I could breeze by them as quickly as some of the plainer passages — they wouldn’t have near the impact on me.

Why is some of the Bible so hard? So we’ll wrestle with it. And let it wrestle with us. God gave us the Bible for answers and explanations, there’s no doubt about that. But He gave it for much more than that: for a living encounter with God Himself. It’s worth the sweat. It’s worth everything.

Be Perfect As God is Perfect. So, Are You a Perfectionist?

Can You Pass This Bible Test?