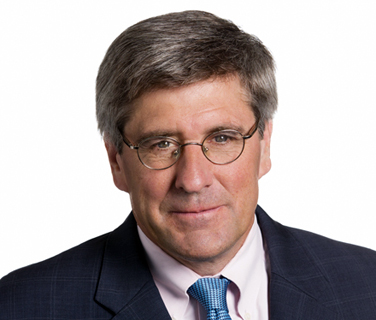 Stephen Moore < Back to Voices

Stephen Moore, who formerly wrote on the economy and public policy for The Wall Street Journal, is a distinguished visiting fellow for the Project for Economic Growth at The Heritage Foundation.

Moore focuses on advancing public policies that increase the rate of economic growth to help the United States retain its position as the global economic superpower. He also works on budget, fiscal and monetary policy and showcases states that get fiscal houses in order. Moore calls his creation of the Club for Growth the defining moment of his career. The organization, which he left in 2004, helps elect conservative members of Congress (including Heritage President Jim DeMint when he first ran for Senate).

Moore, who grew up in New Trier Township, Ill., received a bachelor of arts degree from University of Illinois at Urbana-Champaign. He holds a master’s of arts in economics from George Mason University.

I have never bought the conspiracy theories that COVID-19 was a diabolical political plot to undermine the country. But what is apparent with each passing week is that the virus has been the springboard for the left’s agenda to transform…

The Mojo of Trumponomics

4 Ways to Improve the Tax Bill

The Stupid Party Gets Smart

Why the Left Has Been So Wrong About the Trump Boom

Do the Never-Trumpers Really Want to Aid a Great Victory for Liberal Governance?