No, but the timing of her death could be part of God’s providence for America. 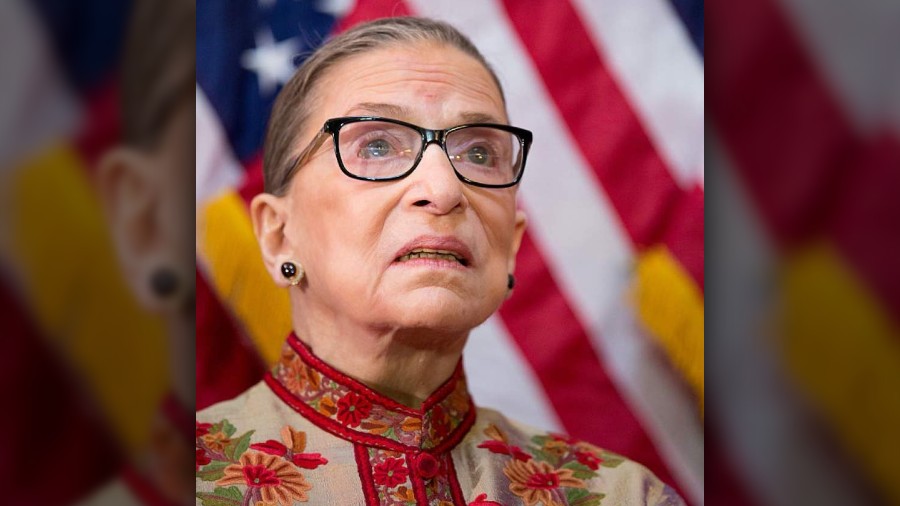 We shouldn’t rush to interpret current events as the will of God. But unless we see Him as a distant, disinterested Watchmaker, we must think that Our Lord nudges events along at crucial times. So the Old Testament tells us, and our theology agrees. We must remain modest and careful in our speculations. Stay careful to label them as provisional, not decisive.

But if we do all that, I think it’s okay to wonder. For instance, did God call home Ruth Bader Ginsburg (long sick and overdue for retirement) at just this moment for some special reason? Perhaps.

Maybe God wants to strip away the veneer of lies and distortions surrounding our upcoming vote in November. Then force us to see what’s really at stake. To take us to the brink of the left’s slippery, Gadarene slope overlooking the sea and warn us: “I have set before you life and death, blessing and curse; therefore choose life, that you and your descendants may live” (Deut. 30:19).

Vote for Us or Die Slowly and Hideously of the Virus

Right now the Democrats, with fanatical help from the mainstream media, are saying exactly that — hijacking scriptural truths, even as Satan did in the desert. They’re claiming that if President Trump wins, millions of Americans will die from COVID. If Democrats win, they will live. The core Democrat message is just that brutal and crude. And it might well have worked, if Justice Ginsburg had lived a few more weeks. But God is in control, and I don’t think He has given up on America just yet.

The left has shamelessly used the COVID crisis for crass political benefit from the word “Go.” First the Democrats waved it off, to tar President Trump as “xenophobic” for banning travel from China — and finish impeaching him based on a pack of lies. Nancy Pelosi legged it to Chinatown, and urged people to swarm Lunar New Year. Bill de Blasio was literally the last man sweating at any gym in New York City. Andrew Cuomo boasted that New York City would have lots of virus cases, since it’s so “welcoming” of immigrants.

Suddenly we’re not just thinking of ourselves, cringing behind our masks and seeing our neighbors as vectors of contagion. Now we’re facing the real, basic life and death issue that divides America: Is human life sacred at all?

Then someone sent out the memo. Maybe a fax came in from Democrats’ friends in Communist China, who’d banned domestic travel while sending virus carriers all around the world. That message gave the Democrats the heads-up: this virus was really serious.

So it was time to politicize it in the opposite direction, to claim contamination phobia as a Democrat issue. To tank Trump’s thriving economy, close our churches, and blame every virus death on Donald Trump — as Joe Biden actually has. To make exceptions to a public health emergency for riots burning police stations. Even, with a staggering shamelessness, to put forth NY Governor Andrew Cuomo as the face of public health. To canonize a man who dumped virus patients on nursing homes, killing thousands of veterans and grandparents.

I wrote months ago that the Democrats were counting on Stockholm Syndrome to carry them to victory. They would lock us at home, trash our businesses via lockdowns or rioting arsonists, make us dependent on government checks, and threaten us with violence if we didn’t vote as they told us. And all my predictions, alas, came true.

A major political party is acting like the Symbionese Liberation Army, and expecting us to react like poor Patty Hearst. After months of beatings, starvation, and rape, she joined their Marxist gang. The black-clad hoodlums of Black Lives Matter and Antifa expect us to do the same. Or else they’ll burn down our cities, and we will die of the virus.

How We Can Really Choose Life

That’s one heckuva campaign platform, I have to say. It echoes Michelle Obama’s message at the Democrat Convention, which in plain English was, “Nice country you got there. Be a real shame if something were to happen to it… .”

The death of a Supreme Court justice, who regarded abortion on demand as crucial for women’s equality and approved of its “eugenic” side-effects, changes the narrative. Suddenly we’re not just thinking of ourselves, cringing behind our masks and seeing our neighbors as vectors of contagion. Now we’re facing the real, basic life and death issue that divides America. Is human life sacred at all? Do we see human beings as images of God deserving respect? Or as featherless bipeds blindly seeking pleasure, avoiding pain, whom we can kill if they’re small enough or weak enough?

The American answer since the beginning has been the Christian one. Our nation was founded not on the ancient, worldwide residual evil of slavery, but on the biblical vision of man. As scholars have shown us and our founders insisted, the “inalienable rights” of the Declaration of Independence come straight out of scripture. No pagan or godless worldview can sustain them. For proof, read Robert Reilly, Eric Metaxas, Mark David Hall, or countless others.

The Left Out of Control

The left has embraced the Void, and lost control of itself. It will riot again, attack more churches, and scream that abortion and infanticide are everyone’s fundamental rights, in order to maximize our sexual freedom. That this crass, sad little privilege is more important than innocent life, since Charles Darwin taught us all that No Lives Matter. Not really.

The Church of Satan will helpfully march alongside Planned Parenthood, claiming that abortion for them is a sacred ritual. Black Lives Matter will reaffirm its support for the mass killing of black kids in clinics. Pudgy pink Catholic bishops who were blathering last week that open borders is a “life issue” might climb back in their hot tubs, perhaps even blush.

And maybe, just maybe, enough voters will see through the mask that this virus pulled over our eyes.